What's the Difference Between Fascism, Communism and Crony-Capitalism? Nothing   (April 16, 2014)


The essence of crony-capitalism is the merger of state and corporate power--the definition of fascism.

When it comes to the real world, the difference between fascism, communism and crony-capitalism is semantic. Let's start with everyone's favorite hot-word, fascism, which Italian dictator Benito Mussolini defined as "the merger of state and corporate power." In other words, the state and corporate cartels are one system.

Real-world communism, for example as practiced in the People's Republic of China, boils down to protecting a thoroughly corrupt elite and state-owned enterprises (SOEs). The state prohibits anything that threatens the profits (and bribes) of SOEs--for example, taxi-apps that enable consumers to bypass the SOE cab companies.

The Chinese mega-city of Shanghai has been cracking down on popular taxi-booking apps, banning their use during rush hour. Until the apps came along, the taxi companies, which are government owned, set the real price for fares and collected about 33 cents each time someone called for a cab. That can add up in a city the size of Shanghai. Wang says the apps bypassed the old system and cut into company revenues.

Much has been made of China's embrace of capitalism, but  along with transportation  the government still dominates key sectors, including energy, telecommunications and banking. Wang says vested government interests won't give them up easily.

How else to describe this other than the merger of state and corporate power? Any company the state doesn't own operates at the whim of the state.

Now let's turn to the crony-capitalist model of the U.S., Japan, the European Union and various kleptocracies around the globe. For PR purposes, the economies of these nations claim to be capitalist, as in free-market capitalism.

Nothing could be further from the truth: these economies are crony-capitalist systems that protect and enrich elites, insiders and vested interests who the state shields from competition and the law.

Since crony-capitalism is set up to benefit parasitic politicos and their private-sector cartel benefactors, reform is impossible. Even the most obviously beneficial variety of reform--for example, simplifying the 4 million-word U.S. tax code--is politically impossible, regardless of who wins the electoral equivalent of a game show (i.e. Demopublicans vs. Republicrats).

The annual cost of navigating the tax code comes to about $170 billion:

Since 2001, Congress has enacted about one new change to the tax law per day. Pathetic, isnt it? This tax code is a burden and a fiasco and deeply unpatriotic. As Olsons Taxpayer Advocate Service notes, this code helps tax evaders; hurts ordinary, honest taxpayers; and corrodes trust in our system.

Here's why the tax code will never be simplified: tax breaks are what the parastic politicos auction off to their crony-capitalist benefactors. Simplify the tax code and you take away the the intrinsically corrupt politicos' primary source of revenue: accepting enormous bribes in exchange for tax breaks for the super-wealthy.

You would also eliminate the livelihood of an entire industry that feeds off the complexities of the tax code. Tax attorneys don't just vote--they constitute a powerful lobby for the Status Quo, even if that Status Quo is rigged, unjust, wasteful, absurd, etc.

It's not that hard to design a simple and fair tax code. Setting aside the thousands of quibbles that benefit one industry or another, it's clear that a consumption-based tax is easier to collect and it promotes production rather than consumption: two good things.

As for a consumption tax being regressive, i.e. punishing low-income households, the solution is very straightforward: exempt real-food groceries (but not snacks, packaged or prepared foods such as fast-food), rent, utilities and local public transportation--the major expenses of low-income households.

1. A 10% consumption tax on everything else would raise about $1.1 trillion, or almost 2/3 of total income tax revenues, not counting payroll taxes (15.3% of all payroll/earned income up to around $113,000 annually, paid half-half by employees and employers), which generate about one-third of all Federal tax revenues and fund the majority of Social Security and a chunk of Medicare.

As for the claim that a 10% consumption tax would kill business--the typical sales tax in California is 9+%, and that hasn't wiped out consumption.

2. The balance could be raised by a progressive tax on unearned income, collected at the source. Most of the income of the super-wealthy is unearned, i.e. dividends, investment income, interest, capital gains, stock options, etc. As a result, a tax on unearned income (above, say, $10,000 annually to enable non-wealthy households to accrue some tax-free investment income) will be a tax on the super-wealthy who collect the vast majority of dividends, interest, capital gains and investment income.

A rough estimate would be 20% of all unearned income. 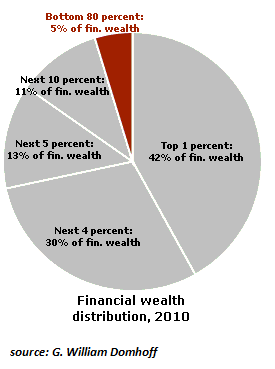 This would "tax the rich" while leaving all earned income untaxed, other than the payroll tax, which is based on the idea that everyone should pay into a system that secures the income of all workers. This would incentivize productive labor and de-incentivize speculation, rentier skimming, etc.

The corporate tax would be eliminated for several reasons:

1. It is heavily gamed, rewarding the scammers and punishing the honest

2. All income from enterprises is eventually distributed to individuals, who would pay the tax on all unearned investment income.

But such common-sense reform is politically impossible. That's why the answer to the question, what's the the difference between fascism, communism and crony-capitalism is nothing.