What Happens After the Low-Hanging Fruit Has Been Picked?
(April 2, 2014)


Right now China is at the top of the S-Curve, and the problems of stagnation are still ahead.

What happens after all the low-hanging fruit has been picked? We can phrase the same question using a different analogy: what happens when all the oxygen in a room has been consumed?

One way to understand why the global financial meltdown occurred in 2008 and not in 2012 is all the oxygen in the room had been consumed. In the U.S. housing market, there was nobody left to buy an overpriced house with a no-document liar loan because everyone who was qualified to buy a McMansion in the middle of nowhere had already bought three and everyone who wasn't qualified had purchased a McMansion to flip with a liar loan.

Once the pool of credulous buyers evaporated, the dominoes fell, eventually circling the globe.

What happens after the low-hanging fruit has been picked? Here's an analogy: erect an enormous 13-story building on a thin slab foundation that is barely adequate for a 2-story house, and tie that flimsy foundation to the earth with fragile hollow pilings. What happens? Collapse. 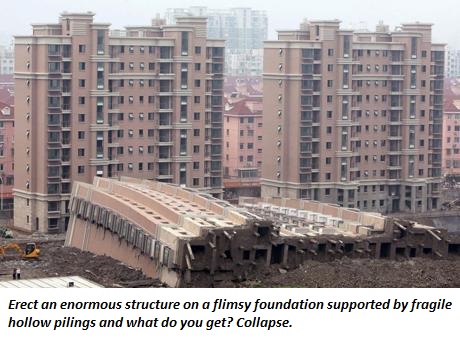 Analysis of the Collapse Of 13-Story Building in China

Anyone tracking the global economy has an eye on China, for obvious reasons. China has led the world's growth for the better part of two decades, and now the growth story has entered a new phase. China is weakening its currency (renminbi/yuan), and trying to throttle its vast credit/shadow banking expansion even as Chinese officials claim China's economy is still expanding at a phenomenal clip (7+% annually).

I think we can shed some insightful analytic light by saying that the low-hanging fruit in China has all been plucked, and this creates an entirely new set of problems and challenges.

The first thing to note about nations experiencing rapid growth is the mathematical impossibility of continued break-neck growth: when China's economy (in purchasing power parity (PPP) or nominal dollars) GDP was $500 billion, an expansion of $50 billion equated to 10% a year.

Now that China's PPP gross domestic product is around $13 trillion, a 10% growth rate would require an expansion of $1.3 trillion--roughly the entire GDP of Spain or Canada.

Obviously, fast growth is easy when the low-hanging fruit are abundant, and it becomes progressively more difficult to maintain as the economy expands.

This pattern of rapid growth, maturity and stagnation can be seen in the S-Curve, a pattern that natural and human-made systems alike track.

When a country lacks infrastructure, or the infrastructure has been destroyed by war, then building infrastructure is the dominant activity in the low-hanging fruit/fast growth phase. Nations such as Japan and Germany experienced rapid growth after World War II for much the same reason China has boomed: infrastructure.

China has reached the maturity phase of the S-Curve in a mere 20 years: every major city has a subway system, thousands of miles of rail and highways have been laid, tens of millions of housing units have been built, and so on. As a result of this single-minded pursuit of building, China now sports nearly empty cities, train stations, malls and highrise residential towers.

In other words, all the low-hanging fruit of infrastructure have been picked.

Observers in Beijing see (well, not very far, due to the severe smog) endless growth of housing, due to strong demand. But this rosy view overlooks the fact that housing throughout China is out of reach not just of the millions of poorly paid migrant workers pouring into the cities but for college graduates--assuming they can even find a job (Chinese College Graduates Cannot Secure Jobs)

As a result, a double-income middle class household can only own a flat if the parents' savings are devoted to the down payment, which is usually 50% of the purchase price in China.

So all the stories of housing demand being permanent are misleading, because only a tiny sliver of the millions of people coming to cities can afford even the cheapest flat in the suburbs.

The other problem is that the low-hanging fruit have all been stripped via an unprecedented expansion of credit. Credit has a pernicious characteristic: it inevitably leads to diminishing returns as low-value, high-risk projects get funded in the rush to build anything and everything everywhere.

In other words, once the high-value low-hanging fruit has been picked, the sensible, high-value investment opportunities have all been taken and all that's left is marginal malinvestments.

In the U.S., this led to the famous McMansions in the middle of nowhere. In China, the general faith is that every building project, no matter how marginal, will soon be filled (and regardless of demand, the government will never let housing decline, even in ghost cities).

But as pointed out above, this presumes the millions of poorly educated rural migrants and the 7 million students graduating from college every year will soon be earning upper-middle-class incomes. Once the fast growth phase has ended, this becomes much more problematic. And indeed, reports of unemployed college graduates are now the norm (see below). As for migrants, most toil in very marginal jobs with low, insecure pay.

Another systemic problem arises when the low-hanging fruit have been picked: expectations of future prosperity have been pushed into the stratosphere, and these expectations will inevitably be disappointed as growth slows.

Rapid industrialization leads to rampant pollution. China has spent very little of its GDP on environmental investments, and now the bill is coming due. It is mathematically impossible for China to spend what needs to be spent (say, 5% of GDP for a decade) on cleaning up the environment and maintaining 7.5% annual growth. Promising people both will only set up a profound disappointment as neither goal can possibly be met.

Lastly, China lacks the cultural capital of maintaining infrastructure. In the 20 years of picking low-hanging fruit, buildings have been routinely torn down and replaced. The idea that a building will have to last 50 years, never mind 100 years, does not compute: if a building shows signs of aging, the solution for the past 20 years has been to tear it down and replace it with something grander.

Those familiar with construction and this lack of infrastructure to oversee and fund maintenance foresee tens of thousands of buildings that will slowly but surely become uninhabitable as elevators break down, pumps stop working, leaks cause concrete to spall, etc.

Anyone with even modest construction experience can see that the foundation beneath the toppled 13-story building is not even remotely adequate; the slightest temblor will destabilize all such buildings, and such feeble footings built directly on grade will lead to cracked pipes and a host of other impossible-to-fix problems.

Right now China is at the top of the S-Curve, and these problems of stagnation are still ahead. The most severe challenge in my view is not material or fiscal, it's psychological: when sky-high expectations crash to earth, social discord starts its own S-Curve of rapid growth.

Chinese College Graduates Cannot Secure Jobs: 28% Of Beijing's 2013 Graduates And 44% Of Shanghai's Have Found A Job:

This year a total of 6.99 million students graduated with a master's, bachelor's or technical college degree in China, an increase of 190,000 from 2012. In contrast, the number of jobs available decreased by 15 percent compared with 2012, according to China Youth, a state-run youth newspaper. Combined, these statistics mean a large portion of graduates will not have a job coming out of school.

Making matters worse for graduates, the "lucky" ones with jobs can expect an average salary of 3,000 yuan per month ($487.89). Netizens have calculated that at this rate, a 2013 graduate will have enough money to purchase a bathroom in the suburbs of Beijing in 10 years, if she doesnt eat and chooses to live on the street.