Which Narrative Will Win Out: Bulls or Bears?

The battle boils down to what controls the market: central banks or fundamentals.

Bulls are confident that central banks have their back in 2016. After all, whatever it takes has successfully pushed equities higher for seven years. Why not an eighth?

Many Bulls also believe the global downturn is over and higher growth is just ahead.

Bears see equities in a multi-year topping process that is remarkably similar to the tops in 2000 and 2008. Bears see sagging profits and stagnant sales as evidence that fundamentals no longer support historically high valuations.

Bulls and Bears can tout data, historical patterns and charts to support their case. Two simple charts cut to the chase: a simple chart of the SPX (S & P 500) and a chart of the real SPX (adjusted to present-day dollars, i.e. inflation) and margin debt, which is the debt punters have borrowed against their stock portfolios (courtesy of chartist Doug Short: NYSE Margin Debt Falls Again: More Confirmation of a Major Market Turning Point Last Year? 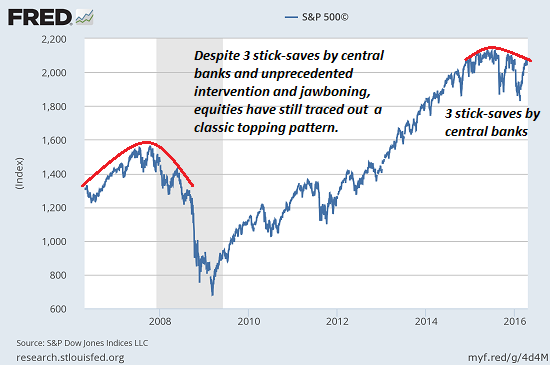 Though Bulls try to make the case that the global economy is about to enter a new growth cycle and equities are under-valued, this is simply code for central banks cannot afford to let equities decline. Given high levels of debt, declining profits and mixed sentiment readings, the Federal Reserve and other central banks must maintain equities at current highs to signal all is well.

After all, the entire goal of central bank manipulation, ahem, intervention, is to spark a wealth effect as households look at their rising portfolios and feel wealthy enough to borrow and spend money they don't have--in other words, get deeper into debt.

Margin debt is acutely sensitive to the fluctuating value of the collateral, i.e. equities. If equities stumble, the dreaded margin call will be issued to those punters whose margin debt exceeds limits. These punters must pony up cash (and who has cash in a market awash in cheap borrowed money) or sell equities to pay down their margin debt.

Bears on the other hand are counting on central bank talk eventually depreciating to its real value of zero. Once a central banker issues yet another whatever it takes pronouncement or assures the markets interest rates will never ever rise, never ever (for the umpteenth time) and equities fail to soar, the confidence that central banker words are all that's needed to boost equities will shatter, and fundamentals might matter again.

The fundamentals are decidedly un-Bullish. Real profits (as opposed to whatever is announced to beat Wall Street estimates by a penny) are plummeting, sales are stagnating, exports are faltering globally and excess capacity / overproduction is rampant.

Companies don't make a profit because the GDP expanded by some marginal percentage--they make money if sales rise and/or costs decline. The only fundamentals that count are rising sales (which might eventually yield higher profits) and higher GAAP profits, i.e. real profits as opposed to PR "profits" announced during quarterly earnings.

The battle boils down to what controls the market: central banks or fundamentals. Belly up to the roulette wheel and place your bets, but don't forget that rigged games can suddenly become unrigged at the most inconvenient moments.