The Future of Money

The cartels and state organs are frantically trying to co-opt, outlaw, corral or control this disruptive technology.

To say that the future of money is blockchain-based crypto-currencies and payment platforms is to state the obvious nowadays. If this wasn't the case, then why are Goldman Sachs et al. (i.e. the global too big to fail banks) rushing to patent their own proprietary versions of blockchain technologies? Why are banks investing heavily in companies that are trying to establish a global blockchain platform for banks?

The reason is that banks understand their core reason to exist is threatened by peer-to-peer, decentralized payment platforms and currencies. If payments no longer need to be routed through a centralized trusted institution, then one core function of banks disappears.

If peer-to-peer lending and securitization becomes easier and cheaper due to the blockchain, then banks' function of allocating capital also vanishes.

Gordon White and I discuss The Future of Money (and its connection to meaningful work) (1:11 hrs; be forewarned we cover a wealth of topics, from philosophy to higher education to gardening to creating value in an economy that is being disrupted.)

If you aren't familiar with blockchain technologies and crypto-currencies, and how these innovations are disrupting centralized banking and state-issued currencies, here are a few articles to start with:

Why Wall Street Is Embracing the BlockchainIts Biggest Threat

The premise of the Bitcoin platforma decentralized, trustless, replicated ledger of transactionsis the virtual opposite of the centralized, trusted, guarded, model of modern securities processing, which has long relied upon DTCC, among others, as a central authority, reads a treatise the organization released alongside that canned quote from its CEO. In other words, the DTCC realizes that its embracing an existential threat.

Forget How Blockchain Works, Talk About What It Does

All that is needed, blockchain boosters argue, is a killer app to find a use for the breakthrough, in the same way that web browsers made the internet useful. Some still think that a currency is the most promising application, but plenty of engineers are throwing other ideas against the wall to see what sticks.

Bitcoin Blockchain Technology In Financial Services: How The Disruption Will Play Out

For an entire industry to be focused on a new technology within three years [of it being known beyond the initial core of enthusiasts] without it actually even disrupting them even 1% yet is an interesting reality, says Chain.com CEO Adam Ludwin. For instance, he notes that in 2000 the recording companies reaction to Napster was not to invest in digital models but instead to sink money into lawsuits. 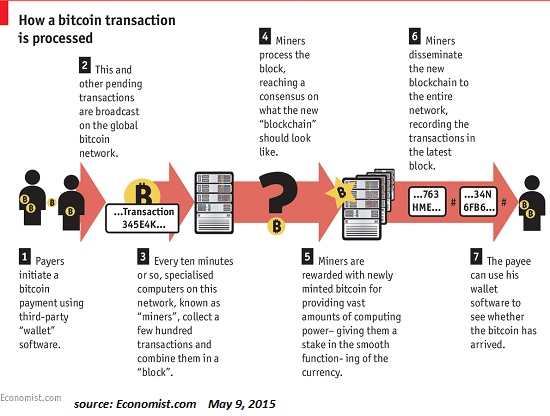 We cannot let the banks and central banks/states co-opt, outlaw, corral or control blockchain technologies. If they "win," our economy will stagnate and the slide to complete implosion will be unstoppable.

The Future of Money (podcast, 1:11 hrs, with host Gordon White)