All the incubator projects around the world are attempting to kickstart an entrepreneurial Network Effect.

We have all experienced The Network Effect: the more people who start using a service, the more valuable that service becomes to every user. Examples include the telephone, the Internet, and social media sites.

As the network adds participants, it become more attractive to new users, and this increase in network value generates a positive feedback loop.

This automatic maximization of mutual benefit is at the heart of Adam Smith's Invisible Hand of transparent markets (as opposed to exploitive markets controlled by rapacious monopolies, cartels and central states).

The Network Effect is expressed mathematically in Metcalfe's Law: the value of a communications network is proportional to the square of the number of connected devices/users of the system. 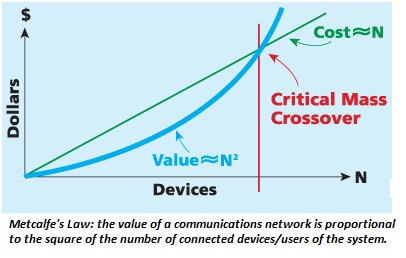 The Network Effect cannot be fully captured by Metcalfe's Law, as the value of the network rises with the number of users in communication with others and with the synergies created by networks of users within the larger network, for example, ecosystems of suppliers and customers.

(Let's call this The Smith Corollary to Metcalfe's Law: the value of the network is created not just by the number of connected devices/users but by the value of the information and knowledge shared by users in sub-networks and in the entire network.

I discuss this broader definition of The Network Effect with Drew Sample in Money, Automation, Permaculture (1:08 hr podcast)

The basic thesis here is that the entrepreneurial vitality that generates jobs and widespread prosperity is a function of The Network Effect.

The Network Effect is the heart (along with the Eight Essential Skills) of my book Get a Job, Build a Real Career and Defy a Bewildering Economy.

What makes the conversation interesting is Drew is actually living the entrepreneurial life: while holding down a paying job, he is pursuing enterprises as diverse as a comedy club and a local network of permaculture suppliers. One part of this project is working with the city of Columbus to start a community garden on a trash-filled abandoned lot in his neighborhood.

As anyone who has attempted to start community projects and enterprises knows, nothing is easy. Obstacles arise, money is tight, some things work, some things don't, and it takes a huge amount of work to move the needle.

Here's an example of The Network Effect: on a brief visit to Los Angeles after attending a permaculture confab in San Diego, Drew was hanging out with L.A.-based comedians within a matter of hours.

This kind of "plugging into the network" is only possible if the network already exists, and is dynamic enough to enable easy connections with new participants.

The reason why the S.F. Bay Area has added 531,000 jobs since 2011 is the incredibly vibrant Network Effect of the region. With 7.2 million residents, 2.6 million households and 3.5 million workers, generating over 500,000 jobs in five years is quite a statement. (Some percentage of those positions replaced jobs lost in the recession.)

Yes, the herd of Bay Area tech startup Unicorns is about to be drastically thinned (and it's about time), but the Unicorns are only a small slice of the region's startups and entrepreneurial vitality.

All the incubator projects around the world are attempting to kickstart an entrepreneurial Network Effect. Although many nations and cities have attempted to create a regional entrepreneurial Network Effect, it isn't that easy. While there are modest successes here and there, Silicon Valley (broadly speaking, the entire S.F. Bay Area) still dominates in terms of venture capital invested and network connections that lead to new enterprises that scale up to dominance or disrupt existing business models.

In contrast, regions dominated by a single corporate/state employer have little entrepreneurial vitality and few nodes in the critical sub-networks of suppliers, customers, mentors, collaborators, etc. When the big factory or military base closes, the region typically slumps into dependence on government social-welfare programs. In effect, the region is a desert for entrepreneurs: there are few of the ecosystems/networks needed to support and nurture new enterprises.

Having a high-tech workforce does not innoculate a region against the collapse of a dominant employer; look at the wreckage left when Nokia imploded. There are Noke-alumni startup efforts, to be sure, but these are not generating the tens of thousands of jobs lost when Nokia collapsed.

The first enterprise in an entrepreneurially lifeless zone has a very tough path, because in addition to trying to earn enough revenues to stay alive, it must create the sub-networks every enterprise needs to survive: suppliers, workers with the needed skills and experience, customers, customers who actively promote the new business, other entrepreneurs, mentors, city officials anxious to help, a landlord willing to offer cheap rent for a few years, etc.

In a place with a vibrant entrepreneurial Network Effect, a new business practically self-assembles itself. In a place with near-zero entrepreneurial Network Effect, every step of the process is arduous and time-consuming, as nobody knows how to successfully start, launch and nurture new enterprises, and the necessary workers, suppliers and tools must be assembled one at a time.

There are countless examples of this: starting a new locally-supplied restaurant in a lifeless downtown; a new small manufacturer in a region that's lost all its workshops, etc. The first cafe has to find or even help launch local sources of fresh food; it has to recruit an experienced chef; it has to set up a modern kitchen; it has to promote itself in a neighborhood that has few other businesses, and so on.

Once there are a half-dozen restaurants in the neighborhood, The Network Effect kicks in and the area becomes a destination. Since the sub-networks are in place, someone planning to open a brew pub will find it much easier to find the right staff, source equipment and supplies and attract customers.

The Network Effect is the foundation of my The Mobile Creative credo: trust your network, not the corporation or the state.

Get a Job, Build a Real Career and Defy a Bewildering Economy