Triffin's Paradox Revisited: Crunch-Time for the U.S. Dollar and the Global Economy

The reality is that we're one panic away from foreign-exchange markets ripping free of central bank manipulation.

While all eyes on fixated on global stock markets as the measure of "prosperity" and "growth" (or is it hubris?), the larger force at work beneath the dovish cooing of central bankers is foreign exchange: the relative value of nations' currencies, which are influenced (like everything else) by supply and demand, which is in turn influenced by interest rates, perceived risk, asset purchases and sales by central banks and capital flows seeking the lowest possible risk and the highest possible return.

Which brings us to Triffin's Paradox, a topic I've covered for many years:

The core of Triffin's Paradox is that the issuer of a reserve currency must serve two entirely different sets of users: the domestic economy, and the international economy.

The U.S. dollar (USD) is the global economy's primary reserve currency. When the Federal Reserve lowered interest rates to zero (Zero Interest Rate Policy, ZIRP), it weakened the dollar relative to other currencies. In this ZIRP environment, it made sense to borrow dollars for next to nothing and use this free money to buy bonds and other assets in other currencies that paid higher yields. Many of these assets were in emerging market economies such as Brazil.

As a result of this enormous carry trade, an estimated $7 trillion was borrowed in USD and invested in other currencies/nations.

Once the Fed started making noises about "normalizing"/raising interest rates in the U.S. (i.e. signaling the markets that a trend change was at hand), the dollar strengthened and the carry trade started reversing: those who had bought assets in other currencies with borrowed USD started selling those assets, which pushed emerging market currencies and markets off a cliff.

Meanwhile, since China pegs its currency the yuan/RMB to the USD, the rising dollar dragged the yuan higher thanks to the peg. A strengthening yuan made China's exports more expensive and less competitive, the last thing China needed as its domestic credit bubble ran out of steam.

So while the Fed needed to "normalize" rates in the U.S. before the next recession required more Fed stimulus, it also needed to weaken the USD to protect China from a destabilizing currency devaluation.

Those holding millions of soon-to-be-devalued yuan in China were naturally anxious to convert their yuan into USD before the devaluation robbed them of 25% of the purchasing power of their money, and this has created an unprecedented capital flow of cash out of China and into USD and other Western assets, such as chateaux in France, homes in Vancouver B.C., etc.

This mad rush of capital out of China is adding another destabilizing factor to China's already wobbly debt bubble economy, and China's weakness has weakened an already wobbly global economy crippled by stagnation and the decline of emerging markets and commodities--two consequences of the rising USD.

This has created a no-win conundrum for the Fed: if it normalizes rates (as it should, after seven years of ZIRP and stimulus) in the domestic U.S. economy, that will strengthen the USD, further pressuring China's yuan and emerging markets, which in turn will further pressure an already-tottering global economy.

There are no winners, regardless of what policy the Fed chooses to pursue. This is why we see such absurd waffling in the Fed: one statement suggests interest rates hikes are on the way, and the next dovish cooing suggests rate hikes are so far away that global markets can safely ignore the possibility.

This push-pull is reflected in the chart of the USD: 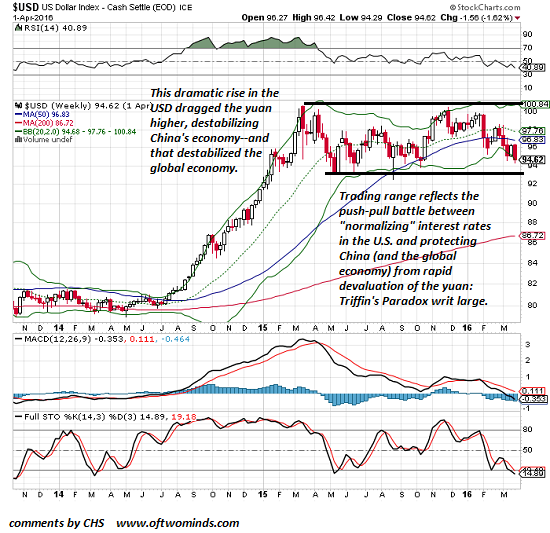 As the Fed waffles in response to global markets, the USD has swung up and down in a trading range.

No nation ever achieved global hegemony by devaluing its currency. Hegemony requires a strong currency, for the ultimate arbitrage is trading fiat currency that has been created out of thin air for real commodities and goods.

Another critical element of U.S. hegemony is to be the dumping ground for the exports of our trading partners. By strengthening the dollar, the Fed increases the purchasing power of everyone who holds USD. This lowers the cost of goods imported from nations with weakening currencies, who are more than willing to trade their commodities and goods for USD.

What better way to keep bond yields low and stock valuations high than insuring a flow of capital into U.S.-denominated assets?

There is one more destabilizing possibility: the markets may push the USD higher, regardless of what the Fed says or does. The currency markets trade $5 trillion a day--more than the Fed's entire $4 trillion balance sheet.

Once traders realize China will have to devalue the yuan by a lot more than a few baby-step devaluations, the stampede into USD could overwhelm even coordinated interventions by central bankers.