About that Bug-Out Hideaway....

The first problem with the remote cabin in the woods (RCITW) bug-out hideaway is that "remote" and "secret" are two different things.

A flurry of recent headlines has highlighted the financial elites interest in secure retreats (a.k.a. bug-out locations) should the trucks stop rolling. That those with the most money and access to expertise are preparing safe havens has moved the conversation about bug-out plans from the alt-media to the mainstream, however briefly.

The intuitive solution to many, from the super-wealthy on down, is some version of a hideaway in the woods: a remote locale known only to the owner, where the owner can burrow safely away until the storm passes.

The Remote Cabin in the Woods: the Perfect Target for Theft

The first problem with the remote cabin in the woods (RCITW) bug-out hideaway is that "remote" and "secret" are two different things. As I explained in my 2008 essay The Art of Survival, Taoism and the Warring States, the local residents have a much different view of whats remote and secret than outsiders.

Simply put, if humans are settled anywhere nearby, nothing is remote or secret. I have come across guys on foot in extremely remote logging roads miles from any paved road, much less a settlement. Ive been startled by hunters on family-owned wooded acreage far from neighbors or towns.

Throw in drones, Internet access to detailed terrain photography that was once the domain of spy satellites and humans healthy curiosity, and "remote" and "secret" just got even scarcer. 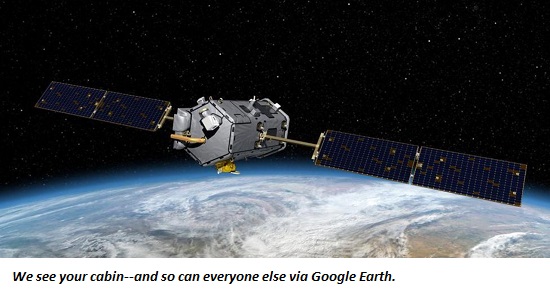 A local news story some years ago illustrated the point: some luckless outsiders entire bug-out cabin was stolen: not the contents, the entire cabin. The "owner" returned to a bare concrete slab.

"Remote and secret" means "easy to steal": nobody around, plenty of time to take the whole darn thing.

I put quotations around "owner" because "owner," "possessor" and "occupant" are different things.

Consider the broken window problem. A kid tosses a rock through the window of an unoccupied house, and people notice the window doesnt get fixed. So somebody has the bright idea of breaking in and looking around. Next, some unsavory characters discover the back doors open, and they start using the place as a crash pad and drug haven. Now the property is occupied--by squatters.

"Squatters rights" have a long history, and the rights of possession could once be transformed into outright ownership back in the day. Evicting squatters can require quite a bit of legal work and money, and of course squatters being evicted tend not to be overly respectful of the house or its contents.

Lest you reckon this possibility is out of the question: a surprising number of abandoned homes in middle-class neighborhoods slide into becoming squatters druggie havens.

It turns out security is less a function of "remote and secret" and more a function of eyes on the street community and full-time occupancy.

About that "Rugged Individualism"....

Theres a whole other set of problems with the remote cabin in the woods (RCITW) bug-out hideaway: the owner of the RCITW is typically as dependent on the fragile supply chain as any urban dweller.

The proud "rugged individual" on the remote homestead may have his own well, a solar panel and a garden, but if we observe him closely we find he drives his hugely inefficient truck into town weekly to fuel up at the gas station, fill his propane tank, pick up his medications, cash his government/ institutional check (Social Security, SSI, pension, etc.), buy 98% of his food calories, get spare parts for his water pump, and so on.

This rugged individual is as dependent on the trucks rolling as any city dweller. He is dead in the water without abundant cheap fossil fuels, functioning supply chains for industrial-manufactured parts, constant delivery of cheap food calories, and money from the state or some financial institution.

If the homestead is remote, hes actually more dependent than the city dweller, because he absolutely needs abundant, affordable, consistently available fuel for his private vehicle to get the essentials of life. The town dweller is just as dependent on the global supply chain, but at least he can walk to the store.

Does a remote rural location add to ones independence from the global supply chain? Not necessarily. It can actually increase dependency and fragility by increasing consumption of fossil fuels (both to drive into town and also to transport goods to distant rural stores) and by positioning oneself at the most costly and least profitable end of already long supply chains.

The idea that Nature is bountiful is largely illusory. Most woods and untilled fields are food deserts to humans. A normal person can walk all day and find nothing remotely edibleand even foragers would be hard-pressed to locate 2,000 calories a day, day after day, week and after week, month after month.

As for growing ones own food: its remarkably difficult to raise tons of calorie-dense food on a small plot of land. The ground water might be deep, or taste bad; the soil might be depleted or rocky, and the weather might not cooperate at all times. One storm at the wrong moment can decimate a crop thats been carefully tended for months.

It turns out "independence" is relative, and may well decrease the farther one gets from agriculture, energy sources and communities.

Or would you rather ask the friendly fellow who is out in his garden, who drops by to share some fresh produce or baked goods, a person you see at church or in town chatting with friends?

The productive relationship is the one with a productive person. Not only is the remote rugged individual unlikely to offer anyone help, he may have little in the way of resources to offer.

"Independence" of the completely self-sufficient sort is relative: most homesteaders still depend on the global supply chain for fossil fuels, manufactured parts, bulk food calories, and so on. Independence may be more properly defined as inter-dependence: the greater the reliance on local interdependent productive networks of makers/growers/doers, the greater the independence.

It isnt just where the goods and services come from, and from how far away; the level of consumption is the critical factor. The lower the consumption of fossil fuels, manufactured goods and bulk food calories shipped from far away, the greater the relative independence. The household that only consumes a gallon of fuel a week (i.e. 35 miles driven in a compact car) is considerably less dependent than the household that consumes 30 gallons of fuel a week.

About Those Wealthy Islands of Security....

The financial elites who reckon they can buy everything they want, including security and independence, might be in for some surprises. Those private security details might be fine for dodging kidnappers, but how about dealing with dozens of hungry squatters? How long will the jet fuel last if youre flying in literally everything? An island built on the promise of unlimited supply of distant goodies is actually an island of fragile dependence, an artificial construct built on shifting sand.

But all the above warnings notwithstanding, it is possible to develop a retreat that's far more sustainable (and likely more enjoyable) than the costly islands of financial elites.

In Part 2: Doing 'Retreat' Right, we lay out the core strategies of developing a retreat that takes into consideration the realities of security, fragility and dependence.

Community and regional resources are key to the selection process of a workable retreat location. Learning what to look for in each is essential to making the right decision for your needs.

This essay was first published on peakprosperity.com, where I am a contributing writer, under the title "Having a 'Retreat' Property Comes With Real Challenges".