The U.S. and China: Why the Sudden Convergence on North Korea?

It was no coincidence that America's 11-ton bunker-tunnel busting bomb was deployed in Afghanistan as tensions mount over North Korea's nuclear theats.

China also noted that "nuclear weapons is DPRK's trump card for its defiance of China and the United States. Once this card is lost, it will become obedient immediately."

The report also said that "the DPRK must not fall into the turmoil to send a large number of refugees, it is not allowed to have a government that is hostile against China on the other side of the Yalu River, and the US military must not push forward its forces to the Yalu River."

For context, here is a satellite photo of the Korean peninsula: note the black hole devoid of lighting. That's North Korea. 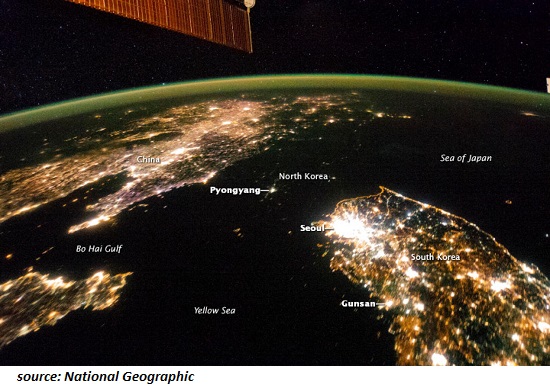 The difference between North Korea and South Korea is mostly political. Stalinist North Korea has starved its people for decades to support a vast war machine, and kept them ignorant of the broader world. This is slowly changing as smugglers do a brisk and highly dangerous business in banned DVDs and other digital media:

South Korea's economy is larger (by some measures) than the economies of nations such as Spain, Australia, Mexico and Russia. South Korea is not just a formidable economic power; it fields a powerful military and has global "soft power" via its media and investment reach. It also has substantial trade with China.

South Korea is a powerhouse, North Korea is a rogue state that has starved millions of its citizens to death and threatens to spark a nuclear war that could impact China very negatively, even if China avoids military conflict.

Which state would you rather be responsible for protecting? Which one is an asset and which is a costly, risky liability? The answer is obvious to all.

To understand the China-North Korea client state relationship, we have to start with the 1950s-era Cold War and the Hot War in Korea 1950-1953. Threatened by the Cold War American presence in South Korea, China viewed North Korea as an essential buffer against invasion from the south.

When allied Western forces occupied virtually all of North Korea in the Korean War, China's army crossed the Yalu River to force a return to the pre-war border between North and South Korea.

China's supreme leader Chairman Mao Zedong took the threat of land invasion so seriously that he ordered (at enormous expense) the relocation of critical industrial plants from coastal areas into the hinterlands, the better to distance them from invasion.

China has effectively subsidized and supported the North Korean state for the past 70 years as a buffer against a land invasion from South Korea. China supplies North Korea with fossil fuels and other essentials and protects it diplomatically.

But does this buffer-state strategy make sense in today's world? The threat is now from nuclear missiles and trade wars, not a land invasion. Though we cannot know what's being discussed or decided behind close doors, the high cost of subsidizing a rogue nuclear state for the now-irrelevant value of a physical buffer may finally be weighing on Chinese decision-makers.

Then there's the all-important matter of "face". The perception of status, influence and power--what's known as "face"--is the core concern in East-Asian societies. "Losing face" by being revealed as powerless and lacking influence is to be avoided at all costs.

Consider how much "face" China is losing in being unable to control its rogue client state, North Korea. China is quite keen on projecting itself as a rising global power, and the dominant power in Asia and the adjacent seas.

So how does it look when a supposed global power can't even control a client state on its own border? China's inability to influence, much less control, North Korea's nuclear ambitions and threats gives the lie to its claim of global power.

Even worse, China--the supposed hegemon of Asia--must stand by as the U.S. sails in to deal with China's rogue client state. In terms of "face," this drama is telegraphing that the global power is the U.S., not China, which has been reduced to bystander in the stand-off over North Korea's nuclear threats.

Imagine if the roles were reversed and China had to send its fleet to the Caribbean to deal with a rogue client state of America's, that America could not control or contain. The loss of face is immense.

It was no coincidence that America's 11-ton bunker-tunnel busting bomb was deployed in Afghanistan as tensions mount over North Korea's nuclear theats. The Chinese newspaper report excerpted above noted that the Chinese military knows the location of North Korea's nuclear facilities, but disabling those deeply buried facilities without resorting to nuclear weapons may be beyond China's military capabilities.

So China loses face again: not only can it not control North Korea's nuclear ambitions, it doesn't have the non-nuclear means to destroy them.

In the context of face being lost as China's inability to control or contain its client state is revealed to all, China has no choice but step in before the U.S. acts unilaterally. In terms of saving face, it would be better to force North Korean compliance before the risk of a nuclear exchange escalates, and China may be signaling North Korea that its patience has finally run out.

China's leadership may have finally concluded that supporting and protecting a costly, rogue-nuclear buffer state is actually reducing China's security and rather than enhancing it. It may be time, at long last, for China to engage in its own version of "regime change" as a necessary step to maintaining China's own security.

From this point of view, the entire drama of American threats of military action may be designed to force China to finally step up and take whatever action is necessary to control its rogue client state.