The trick to wielding power is convincing people you are powerful. The Federal Reserve is a master at this persuasion.

The Fed's control of the real economy boils down to persuading us that it is omniscient and holds the levers of real power. Neither is true. The only sustainable engine of real wealth creation is innovation, and the Fed has essentially nothing to do with innovation, other than creating massive incentives for carry trades and financier speculation, i.e. the acme not of wealth creation but of rentier wealth skimming.

Those who follow the mainstream media’s “all Federal Reserve, all the time” coverage of financial news naturally conclude that Senator Chuck Schumer neatly summarized reality last year when he declared that the Federal Reserve “is the only game in town.”

This obsessive focus on Federal Reserve policies and pronouncements has several causes, including

We can thus anticipate widespread disbelief at the discovery that the Fed is either irrelevant or an impediment to the non-asset-bubble parts of the economy.

Once ensconced in the comfort of the Fed Cargo Cult, it’s easy to believe that the Fed-inflated asset bubbles in stocks, bonds, and real estate are either the most important sectors of the economy, or they accurately reflect the real economy.

But if we emerge from the dark hut of the Fed Cargo Cult into the bright sun of reality, we find that everything that really matters in the real (i.e., non-Wall-Street) economy is outside the control of the Fed.

What the Fed Does Control

For context, let’s recall what the Fed actually does control:

That this is, strictly speaking, not completely within the Fed’s power is left unsaid, lest the magic dissipate.

So the godlike powers of the Fed boil down to three monetary levers.

What the Fed Doesn't Control

Here’s what the Fed cannot do:

Since it can’t do any of these, its powers in the real economy are severely limited.

In actuality, the Fed has little control or influence over the things that really matter in the real economy.

Innovation and the Fed

Innovation is often a meaningless buzzword (think “financial innovation”), but it is also the key driver of wealth creation in the real economy.

The Federal Reserve could be shut down and all its asset bubbles could pop, and innovations in energy, agriculture, transportation, education, media, medicine, etc. would continue to impact the availability and abundance of what really matters in the real world:  energy, knowledge, water, food, and opportunity, to name a few off the top of a long list.

It is rather striking, isn’t it? The supposedly omnipotent Fed has virtually no positive role in the key driver of wealth creation.  On the contrary, the Fed’s policies have had an actively negative influence, as its monetary manipulations have distorted the investment landscape so drastically that capital pours into unproductive speculative bubbles rather than into productive innovation because the return on Fed-backed speculation is higher and the risk is lower (recall the Fed’s $16 trillion bailout of banks; including guarantees, the total aid extended by the Fed exceeded $23 trillion; the landscape looks different when the Fed has your back).

Profits from speculative gambling in malinvestments are yours to keep, while losses are either transferred to the public or buried in the Fed’s balance sheet. Why bother seeking real-world returns earned from real innovations?

Apologists within the Fed Cargo Cult’s gloomy hut (repetitive chanting can be heard through the thin walls—humba, humba, aggregate demand!) claim that the Fed’s financial repression of interest rates boosts innovation by making money cheap for innovators to borrow.

But this is precisely backward: cheap money fuels unproductive speculative bubbles and siphons resources away from innovation, while high interest rates reward innovation and punish malinvestments and financial gambling. 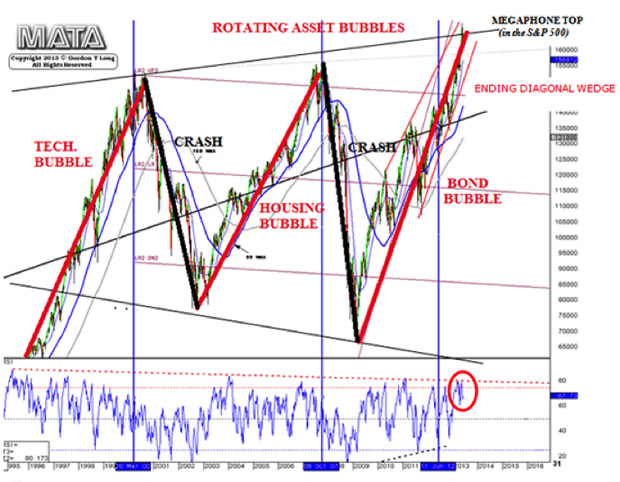 Let’s say J.Q. Public has the opportunity to borrow $1 billion at 0% interest rate from the Federal Reserve.  It costs absolutely nothing to keep the $1 billion. How careful will J.Q. be with the $1 billion? There’s a casino open; why not bet a few thousand dollars at roulette? Actually, why not bet a couple of million? If J.Q. loses the entire $1 billion, there’s no recourse for the lender, while J.Q. gets to keep the winnings (if any).

With essentially free money, there is little incentive to seek out long-term real-world investments that might pay off in the future, and every incentive to seek financial carry trades that generate short-term profits with little risk. In other words, if you can borrow money at 1%, then shifting the funds around the world to lend at 4% generates a 3% return with modest risk.  Since 3% guaranteed return beats the uncertain return of investing in innovative real-world companies, the carry trade is the compellingly superior choice.

If we can only borrow money at an annual rate of 10%, there aren’t many carry trades available, and those that are available are very high-risk. At 10%, we have to sharpen our pencils and select the very best investments that offer the highest returns for the risk.

Let’s say you’re an entrepreneur and it costs 10% per annum to borrow money to pursue a business opportunity. The only investments that make sense at this rate are the ones with outstanding risk-return characteristics.

In other words, cheap money doesn’t incentivize risky investments in high-return innovation; it incentivizes carry trades and financial speculation, which actively siphon off talent and capital that could have been applied to real-world enterprises.  High real interest rates force entrepreneurs to choose the best investments, a process that favors high-risk, high-return innovations.

The Fed isn’t supporting innovation in the real economy; rather, it is actively widening the moat that protects the banking sector from disruptive innovation.

Thanks to innovations in technology, it is now possible to bypass borrowing entirely and raise money for innovative ventures with crowdsourcing. It doesn’t take much insight to look ahead and see that the crowdsourcing model could expand to the point that the economy no longer needs Too Big to Fail Banks at all: Virtually all lending, from commercial paper to home mortgages, could be crowdsourced, managed, and exchanged online.

This sort of real financial innovation is anathema to the Federal Reserve, of course, as its primary task (beneath the PR about maintaining stable prices and employment) is enriching and empowering the banks.

There are only two ways to deal with innovation: either dig a wider regulatory moat to protect your cartel, monopoly, or fiefdom from disruptive innovation, or get on the right side of innovation and evolve amidst the inevitable disruption.

Unfortunately for centralized institutions like the Fed, innovation always jumps the moat and disrupts the Status Quo, despite its frantic efforts to protect the perquisites of those skimming cartel-rentier profits as a droit de seigneur.

In Part II: How You Can Limit Your Exposure to the Fed's Financial Interference, we look more deeply at critical dynamics of the economy that the Fed can and cannot influence – and more importantly, what we can do to protect ourselves from the implications of the Fed's efforts.

There is much we, as individuals, can do to ignore the Emperor's clothes (or lack thereof) and focus on how to pursue our own prosperity and happiness irrespective of the meddling of central planners. The real power is in our hands, should we choose to believe it.

This essay was first published on Peak Prosperity under the title The Fed Matters Much Less Than You Think.


NOTE: gifts/contributions are acknowledged in the order received. Your name and email remain confidential and will not be given to any other individual, company or agency.
Thank you, Quentin V.T. ($5/month), for your splendidly generous re-subscription to this site -- I am greatly honored by your steadfast support and readership.