It has been widely reported that inequality is rising across the entire world, both in developing and developed economies--for example, In China, a Vast Chasm Between the Rich and the Rest and Britain's richest 5% gained most from quantitative easing. 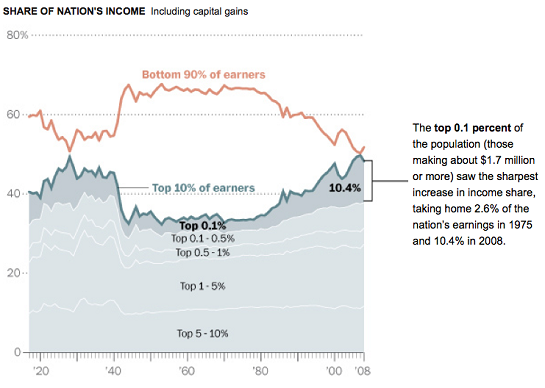 Is this the result of capitalism, globalization, political capture by financial Elites, or are there even deeper forces at work? Foreign Affairs magazine recently published a long and thoughtful article entitled Capitalism and Inequality: What the Right and the Left Get Wrong. Here are two selections that give you a flavor of the article's scope:

"For most of history, the prime source of human insecurity was nature. In such societies, as Marx noted, the economic system was oriented toward stability -- and stagnancy. Capitalist societies, by contrast, have been oriented toward innovation and dynamism, to the creation of new knowledge, new products, and new modes of production and distribution. All of this has shifted the locus of insecurity from nature to the economy."

"As the economist Friedrich Hayek pointed out half a century ago in The Constitution of Liberty, the main impediment to true equality of opportunity is that there is no substitute for intelligent parents or for an emotionally and culturally nurturing family. In the words of a recent study by the economists Pedro Carneiro and James Heckman, "Differences in levels of cognitive and noncognitive skills by family income and family background emerge early and persist. If anything, schooling widens these early differences."

The dozens of comments left by readers reflect the great confusion of opinions that swirl around the topics of inequality and poverty. Politically, it is verboten on the Left to discuss the role of family, parenting and cultural values in income inequality and poverty, just as it is verboten on the right to discuss the role of political capture by the financial Corporatocracy.

In general, I agree with the author of the Foreign Affairs article that capitalism's dynamism and constant flux of capital, labor and innovation places great demands on individuals, enterprises and governments to keep up. Stagnation can be a less stressful choice, but it is not a solution, as inequality rises as fast or even faster in stagnant economies.

So getting rid of capitalism per se does not serve to eliminate poverty so much as distribute poverty to everyone not in the Elite. Cuba appears to a fine example of this feudal dynamic.

Just as clearly, financial manipulation to serve political and financial Elites has greatly expanded income/wealth inequality (see the link above for an example), as the top 5% pull away not just from the bottom 40% but from the 55% below the top 5%.

The conventional matrix of poverty--poor education, near-zero family wealth and low social status--does not impede those immigrants to America who have strong families and a specific set of cultural values centered around education, thrift and investing the resulting savings in productive assets.

Though it is un-PC to make this observation, it is painfully obvious that values, parenting and family have a great deal to do with wealth inequality and poverty. In a less politically charged (and centralized) environment, common sense would suggest that the values that lead to rising income/wealth should be part of what is considered essential education.

As I have long argued here, education by itself is not a panacea: graduating 100,000 PhDs does not magically create a market for their expertise. For example, consider The Ph.D Bust: America's Awful Market for Young Scientistsin 7 Charts.

Though the article makes a closing reference to the robotics/software revolution often discussed here, very little is said about the obvious conclusion, which is a radical reduction in the need for human labor.

I suspect there is another dynamic in play that has been masked by massive credit/debt expansion: finance capitalism and the central state/bank are both on an S-Curve of diminishing returns. This means the return on money invested virtually everywhere is declining, meaning the pie of surpluses that can be consumed, saved or invested is shrinking. The State-cartel debtocracy's dependence on debt for "growth" no longer yields positive returns; it simply indentures future taxpayers to fund current consumption. 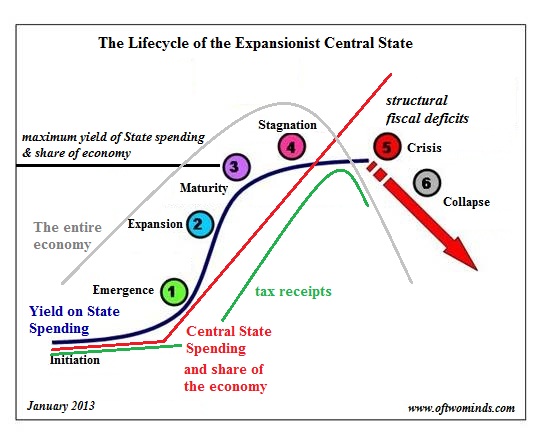 In broad brush, societies can choose between two forms of relatively stable but impoverishing feudalism--stagnant backwater or financial--or accept the existential risks of embracing innovation and experimentation, not just in narrow technological fields but across the entire economy, society and government.

I think we can also conclude that ideologically derived beliefs about inequality and poverty do not shed much light on the actual dynamics, which are clearly multi-stranded and well outside the narrow confines of Left-Right rigidities.

The single greatest way to reduce inequality would be to radically lower the cost of basic living to where it was affordable to even those of low income. This idea remains the focus of much of my work: radically reducing the cost-basis of a high-quality, low-energy-consumption life. For an example, see my post on the Pareto Economy.