Bulls must explain why their rationalizations dont mark this as the top of an asset bubble.

Is this stock market decline the "real deal"--the start of a serious correction of 10% or more--or is it just another garden-variety dip in the long-running Bull market? Let’s start by looking for extremes that tend to mark the tops in Bull markets.

Extremes Eventually Revert to the Mean

There's little doubt that current measures of valuations, sentiment, leverage and complacency have reached historic extremes. Many analysts have posted charts depicting these extremes, and perhaps the one that distills well multiple extremes into one metric is Doug Short’s chart of the S&P 500’s inflation-adjusted Regression to the Trend, another way of saying mean reversion or reverting to the mean. 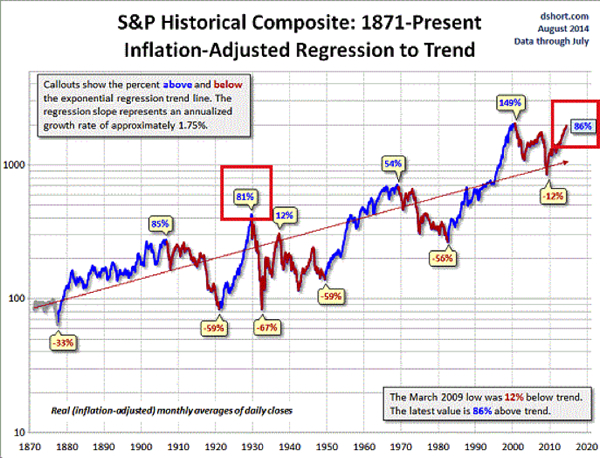 That the current reading exceeds the extreme that preceded the Crash of 1929 should give us pause. And little comfort should be taken that the bubble of 2000 reached even higher extremes, as that should likely be viewed as an outlier rather than the harbinger of the New Normal.

One measure of risk appetite is junk bond yields, which as Lance Roberts shows in this chart, have reached multi-year lows: 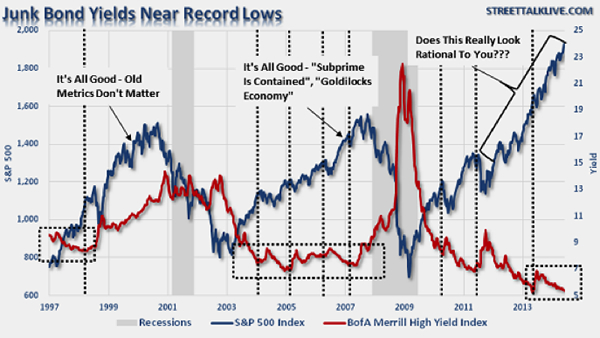 Money managers’ appetite for the “risk-on” asset class of equities is similarly lofty: 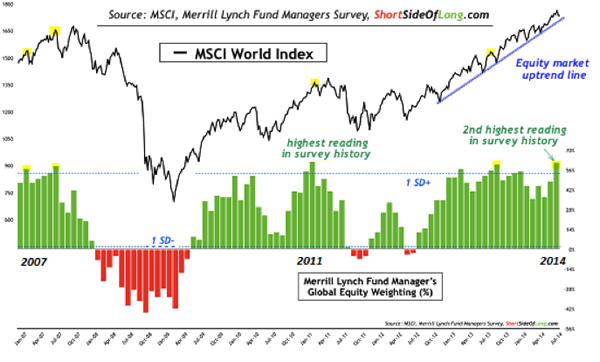 Previous readings near the current level preceded major stock market declines—though high readings have been the norm for the past few years without presaging a major drop.

Can Extremes Be Worked Off Without Affecting Price?

From the Bullish point of view, these extremes have been worked off in relatively mild downturns in the seasonally weak periods of February to April and August to October:

Let’s look at a chart of the S&P 500 (SPX), with a focus on the seasonally weak periods: 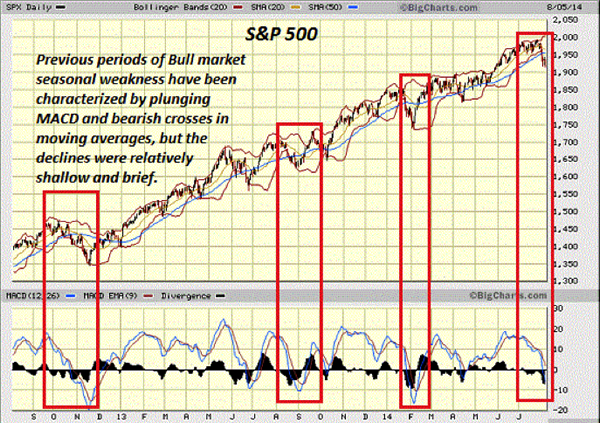 Rather significant declines in indicators such as the MACD have translated into relatively brief, shallow declines.

From the Bull’s perspective, all the extremes in valuations, sentiment, leverage and complacency have been worked off in modest declines that haven’t reached the 10% threshold of a correction. So why should the present period of seasonal weakness be any different?

One potential difference in August 2014 is the sheer number of current financial/market extremes.  Analyst John Hampson prepared a list of all-time records that is impressively long:

Here are some of the all-time records delivered in 2014:

If we had to summarize the current set of extremes in risk appetite, valuations and sentiment, we might state the Bear case as: These extremes characterize the tops of asset bubbles that inevitably deflate in dramatic fashion, despite the majority of participants denying the asset class is in a bubble.

Conversely, we might state the Bull case as: The fundamentals of low interest rates, abundant liquidity, slow but stable growth and rising corporate profits support current measures of value, confidence and risk appetite.

For context, let’s go back in time to the Great Housing Bubble circa 2006-07, when the official and mainstream media narrative denied that housing had reached bubble heights even as the housing market was increasingly dependent on often-fraudulent stated-income (a.k.a. liar loans), interest-only adjustable rate mortgages (ARMs) for sales and mortgage originations.

A report by the U.S. General Accountability Office (GAO) found that almost 80% of all interest-only adjustable-rate mortgages (ARM) and Option ARMs nationwide were stated-income in 2006. In effect, prudent risk management had been thrown out the window. But participants chose to focus on the supposedly solid fundamentals of housing to rationalize their confidence in what was an increasingly obvious Ponzi scheme based on fraud and borrowers who were bound to default once the bubble popped. 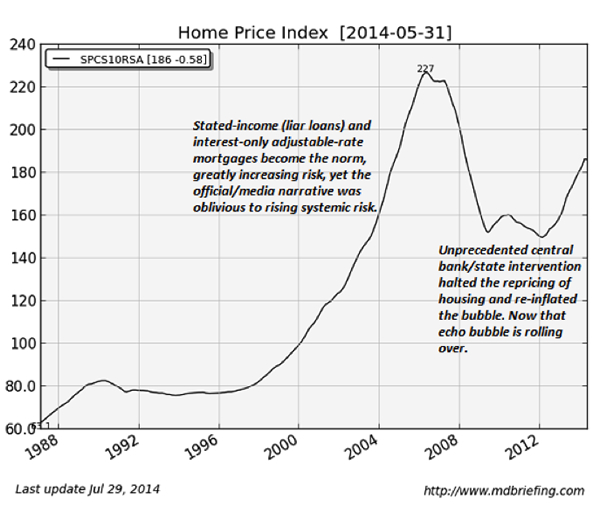 In other words, even as valuations, risk appetite, complacency and Bullish sentiment were reaching extremes, participants and Status Quo observers were confident that these bubble valuations were the New Normal.

Those who are confident that the current stock market is fairly valued have to explain why the many current extremes are different this time from previous asset bubbles, and provide an explanation of why extremes can continue indefinitely or be worked off without affecting price more than a few percentage points.

Indeed, what characterizes Bull markets is their ability to work off extremes of complacency (i.e. low volatility) and overbought conditions with only modest declines in price (for example, the S&P 500 is currently down 3.4% from its closing high around 1,988).

But the weight of these numerous extremes is significant, and a detached observer would naturally wonder if such a wide spectrum of extremes can be worked off without affecting price much.

The prudent observer would also ask: Have stocks been pushed to their current valuations by these extremes, or are these extremes merely temporary spikes of exuberance that have little to do with the fundamentals driving valuations higher?

It’s a critical question. For if extremes in risk appetite and sentiment have underpinned the market’s rise, then as these tides recede, price will inevitably follow.

If these extremes are merely temporary spikes that can dissipate without effecting price, then we have to ask: If this is the case, then what are participants afraid of?

We know participants are afraid of something, because the Put/Call Ratio—a measure of participants buying hedges (put options) against a downturn—has skyrocketed to a multi-year high in the past week: 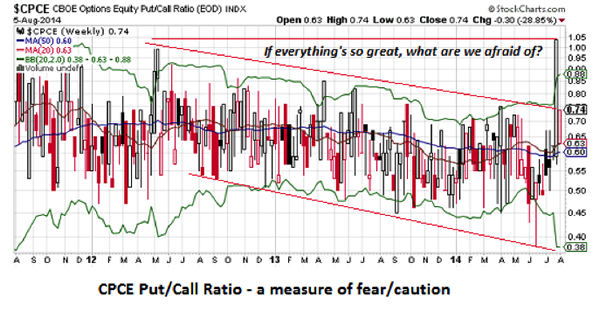 This ratio has traced out a declining channel for the past two years. If nothing fundamental has changed, then what are we afraid of right now?

The Challenge To The Bulls

Those who are confident in the Bull case—that rock-solid fundamentals will drive stocks higher—have a daunting task ahead: they need to explain away the obvious spike in fear/caution, and explain why all these extremes in valuations, sentiment, leverage and complacency have no real bearing on the rock-solid fundamentals.

But given that the psychology of bubbles is characterized by precisely this rationalization of why extremes don’t matter,  Bulls must also explain why their rationalizations don’t mark this as the top of an asset bubble that is remarkably similar in terms of extremes to recent bubbles in housing and stocks.

In Part 2: Prepare For The Bear, we take a look at changing fundamentals that may affect the market’s five-year Bullish bias. We’ll look at how the fundamentals of the Bull case have been weakened or threatened, and determine whether indeed we are witnessing a key moment of direction-reversal in the markets.

This essay was first published on peakprosperity.com.