Denial doesn't change reality. It only cripples our response to reality.

Psychologists and behavioral economists have found that we deceive ourselves (conceal the truth) to serve our own interests. Perhaps this is why the mainstream ignores the Id Monsters in the shadows: shadow banking, shadow housing inventory and shadow liabilities.

Let's start with shadow banking. Shadow banks are hedge funds and other entities that engage in financial business without being banks. Shadow banking is now larger than conventional banking in the U.S.: via Zero Hedge: The Historic Inversion In Shadow Banking Is Now Complete.

The global picture isn't much different. Shadow banks control 5 times as many assets as public financial institutions. Note that most of the shadow banking sector is in the U.S. and Europe: 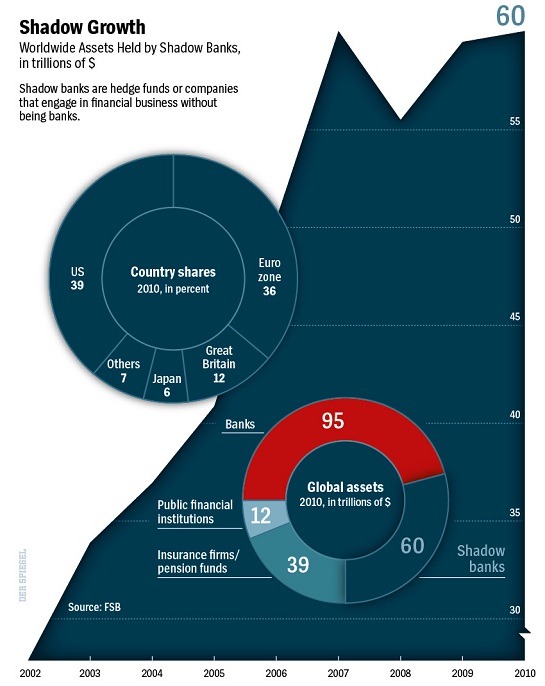 This is not an accurate reflection of China's financial dynamics. In China, the public financial sector is a shadow banking system, with monumental debt sitting on the books of local governments, all supported by the collateral of land stolen from peasants and developed by crony-capitalist partners of government officials.

Much of the wealth extracted by officials and crony-capitalists is held is shadow-banking "wealth management products."

The point here is that the shadow banking systems in Japan and China are enormous but because their financial systems are structured differently, a conventional Western definition of shadow banking (hedge funds, etc.) completely miss the gargantuan shadow banking sectors of Asia.

The irony is that the more the Central States attempt to rein in shadow banking, the more fragile the financial system becomes. Shadow money escapes the State's grasp via any number of means, while the thousands of pages of regulations that were supposed to address shadow banking only burden legitimate banks with pointless friction, rendering them increasingly fragile.

Housing has recovered for two reasons:

1. The Federal government has socialized the mortgage industry, guaranteeing over 90% of all mortgages originated

2. Mortgage lenders have withheld homes off the market to restrict supply, thus driving prices up. 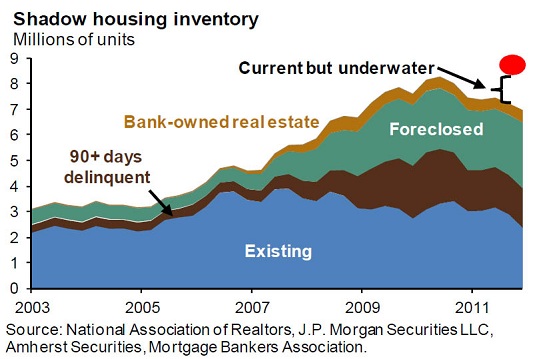 This strategy of artificially restricting supply while socializing mortgages has worked to a point, but housing is vulnerable to any slackening in demand or political pressure to limit the socialization of mortgages. For example, FHA, which has done all the heavy lifting since Fannie Mae was recognized as insolvent, will soon need a taxpayer bailout. Will the public ever tire of subsidizing a manipulated housing market? Stay tuned.

The liabilities of the Federal and state governments are wildly, grossly underestimated, for the reason stated above: if we admit the truth that the promises made cannot possibly be kept, then our own share of the swag may be threatened. So instead we lie to ourselves so we can lie to the world with an easy conscience.

Take a look at the structural mismatch of Federal revenues and spending: 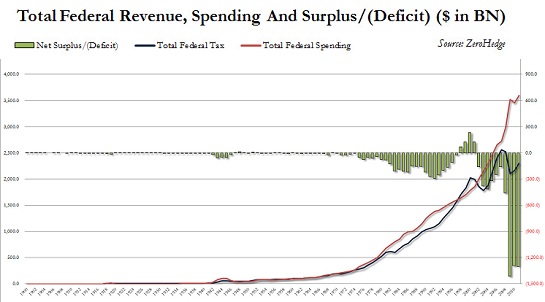 Here is a snapshot of impossible promises. Note that this chart dates from 2006, when all the world was in a bubble of credit and phantom assets; the true picture is now much worse. But what's noteworthy is even back in the "good times" the CBO (Congressional Budget Office) foresaw that tax revenues would flatline.

I would submit that tax revenues have topped out and will start declining, for structural reasons beyond the reach of politicos. Go ahead and raise taxes on everyone, or the top 10%, or some mix of both. People will avoid taxes by making less income, moving assets elsewhere, spending less or moving their enterprise to the cash-informal economy. 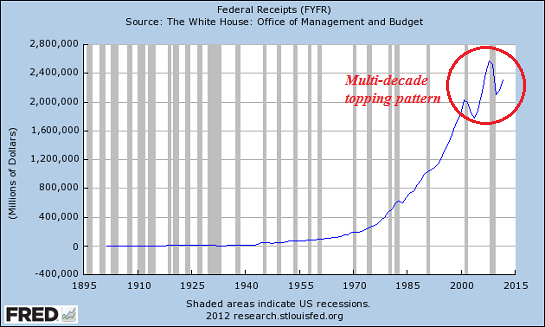 Federal spending has flattened after following an exponential curve upward for decades, but the 10,000 Baby Boomers entering Social Security and Medicare every day from now until 2025 will push spending higher. 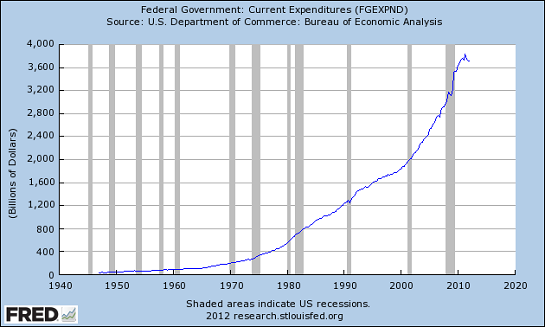 Estimates of future liabilities that exceed tax revenues run from $83 trillion to $120 trillion. Why the big gap? Federal officials are paid to underestimate future costs of these programs, and every one of their projections has been revealed as hopelessly lowballed.

For example, the main Social Security trust fund was projected a few years ago to be rock-solid until 2030. That date was recently revised to 2017. Now that Social Security expenditures are far higher than revenues, the "yikes" moment is anticipated to be 2015.

Denial doesn't change reality. It only cripples our response to reality.