Why the Fed Has to Raise Rates

No empire has ever prospered or endured by weakening its currency.

A great many insightful commentators have made the case for why the Fed shouldn't raise rates this month--or indeed, any other month. The basic idea is that the Fed blew it by waiting until the economy is weakening to raise rates. More specifically, former Fed Chair Ben Bernanke--self-hailed as a "hero that saved the global economy"--blew it by keeping rates at zero and overfeeding the stock market bubble baby with quantitative easing (QE).

Now that the Fed isn't feeding the baby QE, it's throwing a tantrum.

On the other side of the ledger is the argument that the Fed must raise rates to maintain its rapidly thinning credibility. I have made both of these arguments: that the Bernanke Fed blew it big-time, and that the Fed has to raise rates lest its credibility as the caretaker not just of the stock market but of the real economy implodes.

But there is another even more persuasive reason why the Fed must raise rates. It may appear to fall into the devil's advocate camp at first, but if we consider the Fed's action through the lens of Triffin's Paradox, which I have covered numerous times, then it makes sense.

The core of Triffin's Paradox is that the issuer of a reserve currency must serve two quite different sets of users: the domestic economy, and the international economy.

Those who argue the Fed can't possibly raise rates in a weakening domestic economy have forgotten the one absolutely critical mission of the Fed in the Imperial Project is maintaining U.S. dollar hegemony.

No nation ever achieved global hegemony by weakening its currency. Hegemony requires a strong currency, for the ultimate arbitrage is trading fiat currency that has been created out of thin air for real commodities and goods.

Another critical element of U.S. hegemony is to be the dumping ground for exports of our trading partners. By strengthening the dollar, the Fed increases the purchasing power of everyone who holds USD. This lowers the cost of goods imported from nations with weakening currencies, who are more than willing to trade their commodities and goods for fiat USD.

The Fed may not actually be able to raise rates in the domestic economy, as explained here: "But It's Just A 0.25% Rate Hike, What's The Big Deal?" - Here Is The Stunning Answer.

But in this case, perception and signaling are more important than the actual rates: by signaling a sea change in U.S. rates, the Fed will make the USD even more attractive as a reserve currency and U.S.-denominated assets more attractive to those holding weakening currencies.

What better way to keep bond yields low and stock valuations high than insuring a flow of capital into U.S.-denominated assets?

If stocks are the tail of the bond dog, the foreign exchange market is the dog's owner. Despite its recent thumping (due to being the most overloved, crowded trade out there), the USD is trading in a range defined by multi-year highs. 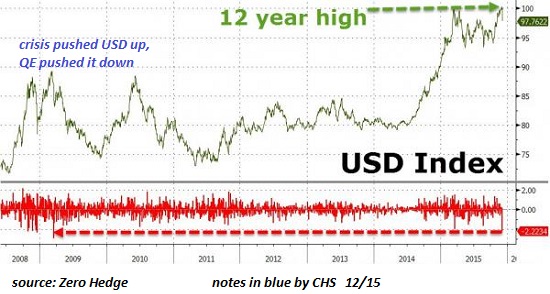 The Fed's balance sheet reveals its basic strategy going forward: maintain its holdings of Treasury bonds and mortgage-backed securities (MBS) while playing around in the repo market in an attempt to manipulate rates higher. 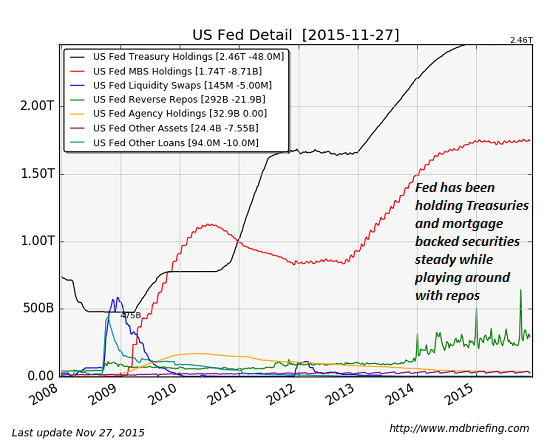 Whether or not the Fed actually manages to raise rates in the real world is less important than maintaining USD hegemony. No empire has ever prospered or endured by weakening its currency.