The Fallacy that Weakening Your Currency Generates Prosperity

Those demanding that the purchasing power of the currency be devalued are impoverishing everyone who holds the currency.

Of the many economic policies that are accepted as true yet are absolute nonsense, perhaps none is more achingly nonsensical than the notion that weakening a nation's currency will magically make that nation prosperous.

Like the equally nonsensical Keynesian Cargo Cult's misplaced obsession with "aggregate demand" driving "growth," the idea that devaluing one's money makes one more prosperous does not make even rudimentary sense.

By lowering the yield on bonds (the favored method of devaluing one's currency), the leadership inflates enormous credit/asset bubbles as everyone seeks to borrow nearly-free money to buy real-world assets that generate income streams. This fatally distorts the domestic economy and creates the potential for crisis in the foreign exchange (FX) market.

The obsession with devaluing one's currency is rooted in the idea that exports are the key to growth, and the only way to boost exports in a world awash in virtually everything is to beggar thy neighbor by lowering the cost of one's exports in other currencies by devaluing your own currency more than competitors are devaluing their currencies.

The problem with this idea is that the cost to the entire economy exceeds the modest gains in exports generated by beggar thy neighbor devaluation. In most economies, exports are a modest sector of the overall economy. In the U.S., exports are around 13.5% of the economy: $2.35 trillion in a $17.4 trillion economy.

U.S. Exports Hit New Annual Record, Reaching $2.35 Trillion in 2014. The U.S. exported $1.64 trillion in goods in 2014, including capital goods, consumer goods, petroleum products, foods, feeds, and beverages, and automotive vehicles and parts. The U.S. exported $710 billion in services in 2014, including travel, transport, charges for the use of intellectual property, and financial services sectors.

What all those demanding the destruction of the currency never mention is the other way to boost exports: improving productivity and making products that are better than those made in competing nations.

The reason why there are so many voices pleading for a weak currency is this boosts exports without having to actually boost productivity. It's boosting exports with sleight of hand rather than by doing the hard work of breaking down the obstructions to improving productivity in the domestic economy: cartels, quasi-monopolies enforced by the central state, over-regulation by the state, the financial skims imposed by central banks obsessed with boosting bank profits at the expense of everyone else, and so on.

If the state uses its power to protect the privileges of the few at the expense of the many, productivity stagnates--which is precisely what is happening. Central banks lowering the yield on capital to zero distorts the incentives to invest and breeds rampant speculation, at the expense of investments in productivity. 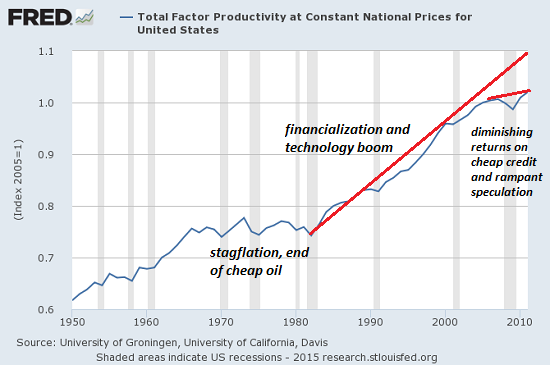 There's another problem with depreciating one's currency as a politically expedient quick-fix: competing nations won't sit still while you take market share away from them via a devalued currency: they will respond by competitively devaluing their currency, which feeds the beggar thy neighbor cycle that ends up beggaring every nation that attempts to out-devalue everyone else.

In effect, those demanding that the purchasing power of the currency be devalued are impoverishing everyone who holds the currency. This isn't the path to prosperity; it is the sure path to impoverishment.

As I noted in an earlier post, No empire has ever prospered by weakening its currency. Reducing the purchasing power of one's money is the road to ruin, not prosperity.