The upside is ephemeral, illusory or wishful thinking; the downside is real and lasting.

There's no upside left--not just in the real economy, but in jobs, politics or policy tweaks. Yes, there will be huge relief rallies in the stock market--relief that the Fed is still omnipotent, that the Fed didn't destroy the world by withdrawing liquidity, etc., etc., etc.--but in terms of sales and profits, there's no upside left: an increasingly nervous upper middle class is reining in profligate spending, while everyone below the top 10% is running out of credit cards, student loans, etc. to tap.

Whatever surplus the real economy generated has been skimmed by financiers, lenders and the central state. Stock buybacks have boosted the wealth of corporate managers and institutional owners while creating zero jobs; lenders have feasted on high-interest credit cards, federally backed student loans and subprime auto loans that are immediately spun off to credulous suckers (Widows and Orphans Fund of Norway, et al.) as high-yield securitized debt.

Anyone working for Corporate America or government has little upside but plenty of downside: bonuses are being slashed, divisions closed, sold off or privatized in the case of government, all to cut costs.

State and local pension funds, bloated by seven years of speculative frenzy, are about to start bleeding from every orifice as reality and risk intrude on the central banks' fantasy of never-ending asset bubbles.

Whatever pension and bennies you were promised--start practicing your fractions, because only a fraction of the bloated promises made by politicos desperate to get re-elected can be paid in the real world.

Doing a great job will either get you fired or overworked: no upside there. If you have the courage (or foolish devotion to truth) to be honest, then you'll be fired as a disruptive "non-team-player" who stepped on too many toes in the pursuit of excellence.

Or if you knuckled under and kept the truth to yourself but managed to get the impossible tasks completed despite the incompetence and/or shoddy work ethic of your managers and peers, you'll get promoted to a job that requires twice the responsibility and workload for a 10% raise.

Anyone taking one of the hundreds of thousands of low-paying service-sector jobs has limited upside in pay and benefits; the corporate owners skim whatever upside there is because labor is in surplus except for narrow fields of expertise.

Productivity gains have been skimmed by corporate owners or the managers: Wage Gains: For Your Boss - Yes; For You - Not So Much (Zero Hedge) 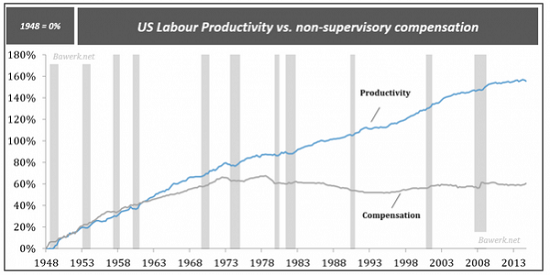 It's all downside, Baby.

The legions living off these inefficient, bloated systems will destroy any real reforms and anyone who dares propose them. The only available process of radical downsizing /rationalization is collapse. That's The Upside of Down (a book I highly recommend).

I don't blame anyone for trying to save their job, division or agency; but the systemic cost of protecting privileges, bureaucracies and cartels is collapse.

But labor isn't the only thing that's in surplus--so is capital. That's why the yield on capital is near-zero or below zero. This has driven money managers to accept extremely dangerous levels of risk to chase yields. That central banks have masked the risk by claiming an omnipotence that cannot exist in the real world has only increased the systemic risks of implosion.

As for the central banks' favored optical distortion device, the stock market--what will drive long-term upside once the market is de-FANGed? Another raft of absurdly overvalued Unicorn stocks?

With risk piling up and yields crashing, there is only downside, Baby.

Meanwhile, the engine of distributed wealth creation, people willing to risk their labor and capital on new enterprises, is cratering: 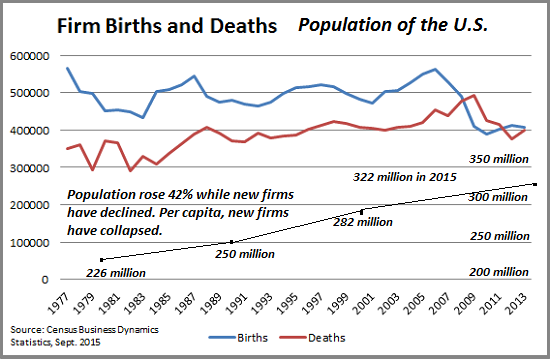 There's no upside to risking everything when the commercial building owner, bank and local / federal government skim whatever you earn to the point that you're losing money every month.

Oh, wait--there is some upside: the black market/cash economy. Those who sidestep the burdens of regulation, litigation and taxes have plenty of upside. But it's all downside for everyone collecting government paychecks and benefits paid with taxes, because the cash economy generates zero income tax revenue and very little junk fees.

That only increases the burden being loaded on the tax-donkeys who have no choice but to pay higher taxes and the legitimate businesses getting socked with ever-higher junk fees and regulatory costs.

The upside is ephemeral, illusory or wishful thinking; the downside is real and lasting.