Could Central Banks Dump Gold in Favor of Bitcoin?

All of which brings us to the "crazy" idea of backing fiat currencies with cryptocurrencies, an idea I first floated back in 2013, long before the current crypto-craze emerged.

Exhibit One: here's your typical central bank, creating trillions of units of currency every year, backed by nothing but trust in the authority of the government, created at the whim of a handful of people in a room and distributed to their cronies, or at the behest of their cronies.

And this is a "trustworthy" currency? 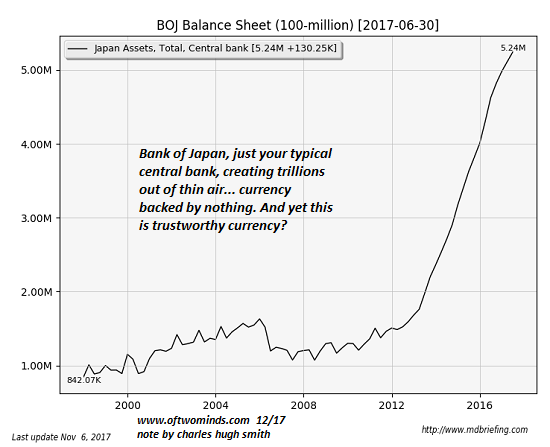 Exhibit Two: central banks can't become insolvent, we're told, because they can create as much currency as they want, whenever they want. And this is a "trustworthy" currency? 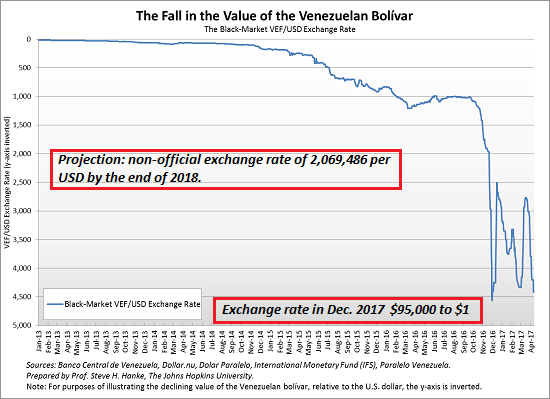 Yes, this was once a "trustworthy" currency.

While many people expect China to issue a gold-backed currency some day, they overlook the inconvenient reality that China is creating far more fiat currency than it is adding in gold reserves. They also overlook that gold-backed means nothing if the currency isn't convertible into gold.

All of which brings us to the "crazy" idea of backing fiat currencies with cryptocurrencies, an idea I first floated back in 2013, long before the current crypto-craze emerged: Could Bitcoin (or equivalent) Become a Global Reserve Currency? (November 7, 2013)

Since there is no real-world commodity backing the digital currency, its value must be based on scarcity and its ubiquity as money. The two ideas are self-reinforcing: there must be demand for the digital money to create scarcity, and the source of demand is the digital currency's acceptance as money that can be used to buy commodities, goods, services and (the ultimate test) gold.

Speaking of gold, correspondent Liberty Philosopher recently posed a scenario that was new to me: if gold continues losing value, could central banks dump their gold in favor of cryptocurrencies?

Yes, I realize this is anathema to those who anticipate a gold-backed currency becoming the dominant form of centrally issued currency, but the idea of governments that have debauched their currencies building reserves of decentralized and limited-in-issuance cryptocurrencies may not be as farfetched as you might imagine.

If the price of gold were to continue to decline, my thought is that governments would be under pressure to sell the reserve asset that was declining in value, because the continuing decline in value would call into question their ability to repay their debts. They couldnt just sit there and allow their reserves to decline in value year after year. They would have to act. If the need for having some kind of hard currency reserve remains (creditors may not want to accept newly printed bank notes in lieu of hard reserves), and they are forced to begin selling their gold reserves, what other hard reserve asset could they obtain or purchase? I think they could become purchasers of the most valuable cryptocurrencies as a replacement for their gold reserves.

The ideal reserve gains in purchasing power over time. If Venezuela had purchased bitcoin in size when it was $100, or even $1,000 in January 2017, its own currency wouldn't be heading to near-zero quite so quickly.

In my book A Radically Beneficial World, I proposed that nations which had debauched their centrally issued fiat currency could acquire the labor-backed currency I propose as reserves.

The acquisition of decentralized cryptocurrencies as reserves may sound crazy now, but as central banks destroy the purchasing power of their fiat currencies, all sorts of ideas that seem crazy now will start looking practical once the death spiral of the current unstable monetary regime begins.