Misunderstanding the Economics of Robotics

Robots are only cost-effective in the narrow niches of commoditized tasks.

In the view of Universal Basic Income (UBI) advocates, substituting robots for human labor will not only free virtually all humans from working, it will also generate endless wealth because the robots will be doing almost all of the work.

To reach a more realistic understanding of the economics of robots, lets return to author Peter Druckers maxim: enterprises dont have profits, enterprises only have expenses. In other words, from the outside, it looks as if businesses generate profits as a matter of course.

Enterprises dont have profits, enterprises only have expenses captures the core dynamic of all enterprises: the only reliable characteristic of enterprises, whether they are owned by the state, the workers or private investors, is that they have expenses. Profits--needed to reinvest in the enterprise and build capital--can only be reaped if revenues exceed the costs of production, general overhead and debt service.

Robots are complex machines that require substantial quantities of energy and resources to produce, program and maintain. As a result, they will never be super-cheap to manufacture, own or maintain.

Robots, and the ecosystem of software, engineering, spare parts, diagnostics, etc. needed to produce, power and maintain them, are a large capital and operational expense.

Robots only make financial sense in a very narrow swath of commoditized production, or in situations such as war or hazardous rescue missions where cost is not the primary issue.

Compare the following two tasks and the cost and complexity of the robots needed to complete them in a cost-effective manner.

Task one: move boxes around a warehouse with flat concrete floors and fixed shelving mounted with hundreds of sensors to guide robots.

Task two: navigate extremely rough and uneven terrain with no embedded sensors, dig deep holes in rocky soil, and plant a delicate seedling in each hole. Each hole must be selected by contextual criteria; there is no pre-set grid pattern to the planting.

The first task has all the features that make robots cost-effective: easily navigable flat floors, fixed, easily mapped structures embedded with multiple sensors, and a limited, easily programmable repertoire of physical movements: stock boxes on the shelving, retrieve boxes from the shelving. The compact working space makes it practical to reprogram, recharge and repair the robots; spare parts can be kept onsite, and so on.

The second task--one of the steps in restoring a habitat--has none of these features. The terrain is extremely uneven and challenging to navigate; the varied surfaces may be hazardous in non-obvious ways (prone to sliding, etc.); there are no embedded sensors to guide the robot; its difficult and costly to service the robots onsite, and the task is extremely contextual, requiring numerous judgments and decisions and a wide variety of physical steps, ranging from the arduous task of digging a hole in rocky ground to delicately handling fragile seedlings.

Exactly what sort of robot would be capable of completing these tasks without human guidance? A drone might be able to ferry the fragile seedlings, but any drone capable of landing and punching a hole in unforgiving ground would be very heavy. Combining these disparate skills in one or even multiple robotsthe heavy work of digging a hole in rocky soil on uneven ground, embedding a fragile seedling in just the right amount of compost and then watering the seedling deeply enough to give it a chance to survivewould be technically challenging.

And what profit is there to be earned from this restoration a public-land habitat? Since the habitat is public commons, there is no customer base to sell high-margin products to. If the state is paying for the job, it chooses the vendor by competitive bidding. Given the conditions, a vendor with human labor will likely be more reliable and cheaper, as this is the sort of work that humans are supremely adapted to perform efficiently.

Given that restoring a habitat generates no profit, perhaps the work is done entirely by volunteers.

In any of these cases, a costly array of robots facing a daunting challenge that could cause multiple failures (robots sliding down the slope, seedlings crushed, too little compost, compost over-compressed, water didnt soak in, etc.) is simply not cost-effective. 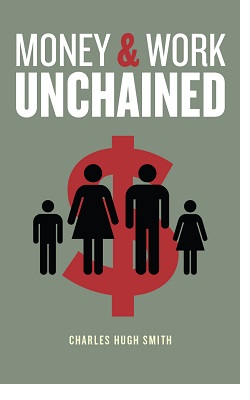 You see the point: humans have few advantages in a concrete floor warehouse with fixed metal shelving. Robots have all the advantages in that carefully controlled environment performing repeatable, easily defined tasks. But in the wilds of a hillside jumble of rocks, fallen trees, etc., handling tasks that require accuracy, strength, judgment, contextual understanding and a delicate touch, humans have all the advantages.

In other words, robots are only cost-effective in the narrow niches of commoditized tasks: repeatable tasks that are easy to break down into programmable steps that can be performed in a controlled environment.

Those with little experience of actually manufacturing a robot may look at a multi-million dollar prototype performing some task (often under human guidance, which is carefully kept off-camera) and assume that robots will decline in price on the same trajectory as computer components.

But the geometric rise in computing power and the corresponding decline in the cost of processing and memory is not a model for real-world components such as robots, which will continue to be extraordinarily resource and energy-intensive even if microchips decline in cost.

Vehicles might be a more realistic example of the cost consequences of increasing complexity and the consumption of resources: vehicles havent declined in cost by 95% like memory chips; theyve increased in cost.

Self-driving vehicles are another example of how commoditized automation can be profitable performing a commoditized task. First, roadways are smooth, easy to map and easy to embed with sensors. Second, vehicles are intrinsically complex and costly; the average price of a vehicle is around $40,000. The sensors, electronics, software and motors required to make a vehicle autonomous are a relatively modest percentage of the total cost of the vehicle. Third, manufacturing vehicles is a profitable venture with a large base of customers. Fourth, the actual tasks of drivingnavigating streets, accelerating, braking, etc.--are relatively limited in number. In other words, driving is a commoditized task that lends itself to automation.

Once again, robots have multiple advantages in this commoditized task as they are not easily distracted, dont get drunk, and they dont fall asleep. Humans have few advantages in this environment. And as noted, manufacturing autonomous vehicles will likely be a highly profitable business for those who master the processes.

Since so much of the production of goods and services in the advanced economies is based on commoditized tasks, its easy to make the mistake of extending these very narrowly defined capabilities in profitable enterprises to the whole of human life. But as my example illustrates, a wide array of work doesnt lend itself to cost-effective robots, as robots have few if any advantages in these environments, while humans are supremely adapted to doing these kinds of tasks.

In effect, proponents of Universal Basic Income (UBI) assume robots will be able to perform 95% of all human work, ignoring the limitations of cost: robots will only perform work that is profitable, and profitable work is a remarkably modest subset of all human labor.

But this is not the truly crushing limitation of robots; that limit is intrinsic to the economics of automation.