The Global Economy Could Fall Farther and Faster Than Pundits Expect

The core narrative of central bank/cartel capitalism is centralized agencies have the power to limit downturns and extend credit-based "good times" almost indefinitely. The centralized power bag of tricks includes fiscal policies such as deficit spending to boost "aggregate demand" in downturns and monetary policies such as lowering interest rates to zero and buying assets, a.k.a. quantitative easing.

If we crawl under the barbed wire and escape the ideological Keynesian Concentration Camp, we find thinkers such as Ugo Bardi, John Michael Greer and Dimitry Orlov, whose work explores the dynamics of collapse, resilience and sustainability.

All three have added a great deal to my own (emerging) understanding of the many dynamics of collapse.

We can summarize the dynamics of collapse in many ways; here's one: collapse is latent fragility manifesting. A familiar (and tragic) health analogy offers an example: a middle-aged man doesn't appear ill, a bit thick around the middle perhaps, but neither he nor his intimates can see the fragility of his clogged arteries and blood-starved heart. Seemingly "out of the blue," the man has a massive heart attack and passes from this Earth, to the shock of everyone who knew him.

Financial collapse isn't "out of the blue," any more than a heart attack is "out of the blue." Actions and choices have consequences, and as resilience and redundancy are slowly stripped from complex systems, systemic fragility builds beneath the surface. At some difficult-to-predict point, a threshold is reached and the complex system fails.

The problem for "growth" based on the fragile margins is that the entire system becomes fragile as a direct result of this dependence on fragile margins. The current global real estate bubble is predicated on one condition: that the supply of corrupt Chinese officials fleeing China with ill-gotten millions to invest overseas is endless.

This is why financial panics and collapses always appear (like fatal heart attacks) to be "out of the blue" to conventional economics. 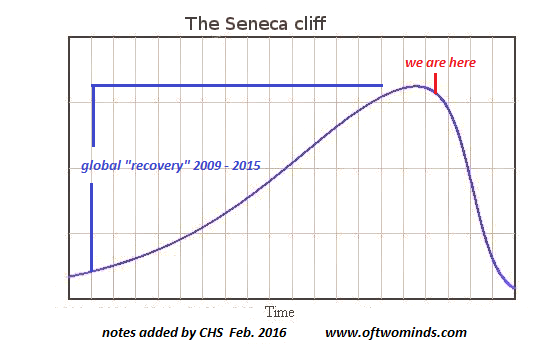 Recall that the global "recovery" 2009 - 2015 was entirely based on the expansion of debt taken on by marginal borrowers. Systemic fragility doesn't respond to central bank jawboning or Keynesian claptrap; unlike those "policy tools," fragility is real.