I had to chuckle at the breathless February 4 BusinessWeek feature: The Economy: How Real Was the Prosperity?

How did a poor dumb writer like me (and many other bloggers) beat BusinessWeek's huge staff of professional journalists like a gong, getting the story they are just now addressing by over two years?

Your answer, whatever it may be, says volumes about the pathetic cheerleading state of the mainstream financial media.

What's even more stunning is that the BusinessWeek story ran charts which are eerily similar to charts you've seen on the Web for years--there's absolutely nothing new in the BW story except the tacit admission of journalistic incompetence that the "story" was ignored until events forced BW's hand.

OK, you were right. Nice. But what have you done for me today? Jeez, what a demanding audience! A guy can't even rest on his laurels. So you want a snapshot of the future? I can't provide that, but let's start with a quote from one of the great traders of all time, George Soros:

"Economic history is a never-ending series of episodes based on falsehoods and lies, not truths. It represents the path to big money. The object is to recognize the trend whose premise is false, ride that trend, and step off before it is discredited."

So what's the trend now? It's been down as the mainstream media and various other players have caught on to the inevitability of recession. But a reversal--yes, a trend whose premise, that everything's not as bad as we thought, is false--may well be working its way to the surface. Consider this 5-year chart of the Dow Jones Industrial Average: 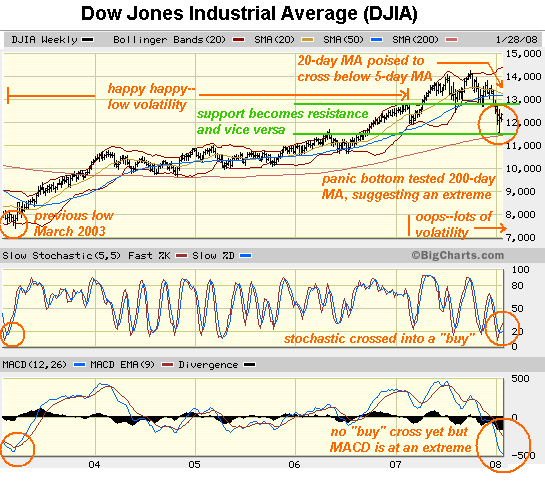 Looking at the economy, the skeptic would wonder how the stock market could rally. That's where Mr. Soros steps in to remind us that traders aren't interested in the economy per se, they're interested in the trend. And there are various signals (stochastic cross, MACD extreme, widening Bollinger bands, etc.) which suggest the downward trend of the past few months may well reverse.

For how long? Until the trend reverses. Of course the market could swoon once again and even retest the 11,500 level in the short-term. But this long-term chart suggests a primary trend reversal is becoming likely.

It is frustrating to a fundamental analyst to be told the market has virtually no relation to reality or the truth; it should, it should! But alas, it doesn't. The economy stinks, but if the DJIA clears resistance around 12,800, it could conceivably hit a new high. Is that a prediction? No, just a way of saying the trend goes on until it reverses.

As Mr. Soros put it: "The object is to recognize the trend whose premise is false, ride that trend, and step off before it is discredited." We would do well, I think, to ponder that, even if it runs counter to what we currently believe.


Readers Journal has been updated! New comments by Michael Goodfellow and others have been added:

Thank you, Kelly M. ($25), for your generous donation in support of this humble site. I am greatly honored by your contribution and readership. All contributors are listed below in acknowledgement of my gratitude.

Thank you, Michael S. ($15), for your much-appreciated donation in support of this humble site. I am greatly honored by your contribution and readership. All contributors are listed below in acknowledgement of my gratitude.