A titanic political battle is brewing between the parasitic aristocracy, the dependent class and the two classes creating value with their labor.

In the conventional view, America's socioeconomic classes are divided by income and wealth into various layers of Wealthy, Middle Class and Poor.

If we extend the analysis presented in Why Employment in the U.S. Isn't Coming Back (January 29, 2013) and Why Employment Is Dead in the Water (January 28, 2013), we get an entirely different framework that breaks naturally into four classes:

There are of course various distinctions that must be made within each broad class, but the point is the financial health of the nation ultimately depends on creating surplus value--value in excess of the costs of production and overhead.

Wealth that is incapable of generating new wealth is consumed, i.e. eating our seed corn: once the investable capital is gone, it is no longer available to leverage new wealth creation, and the nation spirals into poverty and conflict.

In the conventional view, the wealthy subsidize the poor via taxes and donations to charity (i.e. noblesse oblige). But the conventional framework ignores the key question of where the wealthy obtained their fortunes, and the consequences of that wealth acquisition on the larger economy.

If the wealthy parasitically skimmed their wealth, they are in effect depriving the economy of capital that could have been productively invested elsewhere. If they created value far in excess of the costs of their enterprise, then they were conduits of high-value creation.

Here is a snapshot of parasitic wealth skimming: the financial aristocracy skims roughly 5% of the nation's entire output (GDP) from the 60% of the populace that are debt-serfs (the top 5% have wealth that is not debt-dependent, and the bottom 35% are too poor to have any credit). 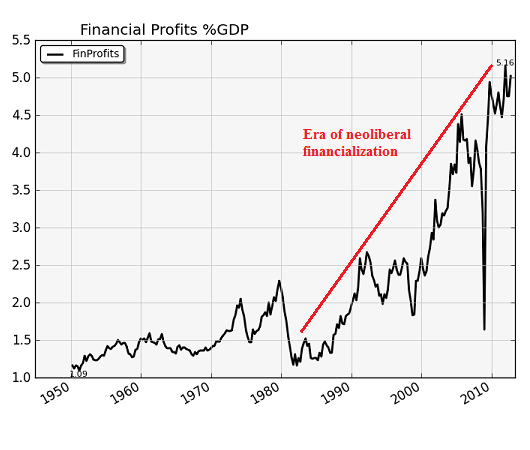 Financial profits per capita (per person): this eliminates the abstraction of numbers in the hundreds of billions of dollars by measuring the parasitic skim extracted from each American: 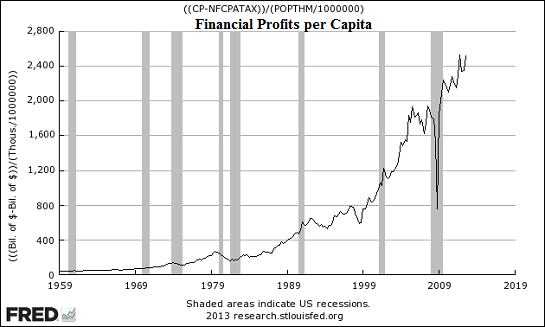 The financial sector is only the most visible part of the parasitic skim; most of the skim is hidden within cartels enabled and enforced by the Central State (Federal government).

2. The cartel enforces a socio-political agenda that has nothing to do with the ostensible purpose of the cartel's operations.

This describes the national security cartel, the sickcare cartel, the higher-education cartel and the drug-war/gulag cartel, to name just the most obvious.

The national security cartel absorbs hundreds of billions of dollars annually, yet the value of trillion-dollar weapons systems like the F-35 are rapidly diminishing in an era of networked drones.

The sickcare cartel now absorbs almost 20% of the nation's entire economy (GDP) yet the health of the populace measurably declines by most international metrics.

The higher-education cartel manages to expand its share of the national income even as the cartel's output--the relevancy and value of its product, a college degree-- is increasingly marginalized. (Students: You Are Exploited Debt-Serfs April 12, 2011)

Overcrowded classes now routinely view coursework on large screens that is drawn from the Internet rather than live lectures--lessons the students could get for free on their own. Textbooks that cost $150 each (how's that for cartel pricing?) cover material that is also available online for free or a very low cost. Meanwhile, administration costs are replacing instruction as the primary costs of the cartel:

No wonder higher education and healthcare are "rights." That agenda guarantees the cartels' control of the national income will only expand.

The drug-war/gulag cartel consumes billions of dollars annually on suppressing marijuana and jailing drug users and nickel-bag dealers, while fully legal and readily available alcohol kills tens of thousands annually via vehicle accidents, murders committed while intoxicated, liver disease, etc., none of which can be traced to marijuana useage.

Forgotten thanks to the relentless drug-war/gulag cartel propaganda is the fact that U.S. physicians routinely prescribed cannabis in the late 19th as a cure for a variety of common ailments. (For the record, I am not a user attempting to justify my usage; this is simply unassailable historical fact.)

Since the value created by these cartels is far less than their costs, they are all part of the parasitic aristocracy skimming wealth rather than creating it.

As noted in the previous essays on employment, once an economy's cost basis rises above the value created by most labor, it is no longer financially possible to pay people to perform low-value creation work.

Robots and software become the only sustainable way to get the work done for a cost that is lower than the value created. Robot Economy Could Cause Up To 75 Percent Unemployment. As I explained in Why Employment in the U.S. Isn't Coming Back, ever-higher labor and overhead costs make this the only path open to enterprises that aren't subsidized or protected by the government.

What we need to consider is what happens as the parasitic and dependent classes take an ever-larger share of the national surplus while the classes creating most of the value decline in size and political influence.

This has nothing to do with what people "deserve" or what they've been promised; it has everything to do with what is economically sustainable. The conventional political discussion is focused on what everyone is receiving; the discussion that matters is how much value is being created, and can that wealth support a parasitic aristocracy, politically untouchable cartels and a vast and growing class of State dependents.

Based on income and taxes paid, it appears the high value creation class has shrunk to around 20% of the workforce, as the top 20% pay roughly 80% of the income and payroll taxes.

In general terms, there are 150 million people reporting earned income, i.e. working at some sort of job or self-employment. Roughly 38 million are part-time, and so full-time workers number around 112 million. As noted in Why Employment Is Dead in the Water, 38 million American workers earn less than $10,000 per year, a number that aligns with the number of part-time employees; 50 million earn less that $15,000 a year and 61 million earn less than $20,000 annually.

In broad-brush, the bottom 40% of wage earners work in low-value creation jobs. Their wages are capped by the value their labor creates. The top 20% are in high-value creation jobs and the middle 40% fill the spectrum between $100,000 and $21,000 a year in earned income.

Looking ahead, we can discern a time when the class creating most of the value and paying most of the taxes declines to the point that the value created is no longer large enough to support both a parasitic aristocracy and a vast class of dependents (children, retirees, disabled, unemployed, etc.) while the majority of wage earners are barely getting by on their declining household incomes. Recall that there are about 307 million Americans and roughly a third have living-wage jobs, i.e. full-time jobs.

That sets the stage for a titanic political battle--one that could trigger a constitutional crisis--between the parasitic aristocracy, the dependent class and the two classes creating value with their labor.

In this context, America is filling the gap between the value we create and what we spend by borrowing $1 trillion+ a year on the Federal level and hundreds of billions more on the local-government and private-sector levels. All this debt isn't being "invested" in new value-creation; it is funding consumption and cartel skimming on a monumental scale.

To receive a 20% discount on the print edition: $19.20 (retail $24), follow the link, open a Createspace account and enter discount code SJRGPLAB. (This is the only way I can offer a discount.


NOTE: gifts/contributions are acknowledged in the order received. Your name and email remain confidential and will not be given to any other individual, company or agency.
Thank you, Jerzy W. ($100), for your outrageously generous contribution to this site --I am greatly honored by your steadfast support and readership.