Ours is a dysfunctional debt-based Empire that buys the complicity of its debt-serfs with entitlement bread and circuses.

The road to debt-serfdom is paved by the banks and enforced by the Central State. If there is any point that is lost on ideologues, Progressive and Conservative alike, it is this: the first-order servitude and second-order tyranny of debt-serfdom can only occur if the banks' power is extended and protected by an expansive Central State. 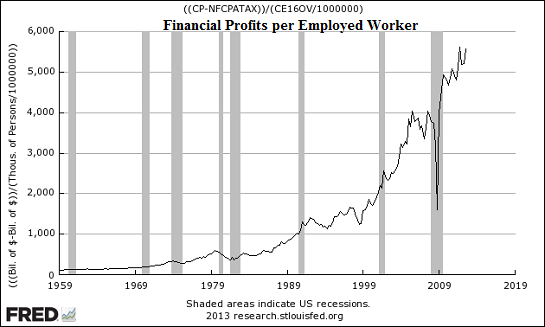 Answer these questions before reaching for your ideological blanket:

1. How many banks would loan penniless, near-zero-income students $100,000 if the State did not backstop and ruthlessly enforce its parasitic, exploitive "student loan" programs? Answer: none.

The consequence if the tyrannical State ceased to enforce the debt-serfdom of Student Loans: the Education Cartel would collapse in a odoriferous heap, and the banking Aristocracy would be stripped of a highly profitable State-run business.

2. Under what conditions would banks originate mortgages if the State did not guarantee mortgages via FHA and the other socialized-mortgage agencies? Answer: 30% to 35% down, hefty points and a higher rate of interest than FHA loans.

We can find the answer by examining the conditions banks demand for non-State backed loans. If the State wasn't backstopping the risk, what bank would be insane enough to originate a 30-year fixed mortgage at 1 point over official inflation and a negative rate when measured in real inflation? It makes no sense without State subsidies and guarantees.

What percentage of the mortgage market is purely private, i.e. not backstopped by FHA et al.? About 5%, and the terms of these private loans are considerably stiffer than those originated under the taxpayer-funded umbrella of FHA.

In other words, debt-serfdom is not possible without the State enabling and enforcing the banks' power. Blaming the banks for imposing debt-serfdom is like blaming the junkie for picking up a free bag of smack or a shark for wolfing down a seal: the banks will pursue the fattest, easiest profits out of basic self-interest, just like the rest of us.

If the banks can capture the State's regulatory and political machinery for a modest investment in bribery (oops, I mean political contributions, lobbying and revolving-door positions), then why wouldn't they do so?

There is precious little evidence that anyone in the current political Aristocracy has read the Federalist Papers, other than to pass an exam, and more's the pity. That a State run by people whose grasp of American history extends all the way back to the previous election cycle (or in extreme cases, to the Reagan era that began in 1981) is dysfunctional is unsurprising.

Madison feared both a central bank and a presidency that morphed into a functional monarchy. Madison's fears of a central bank were shared by his decidedly non-Federalist friend Thomas Jefferson, whose vision of a rural, localized America generally ran counter to the Federalists' keen awareness that a strong central state was necessary to provide for a defense of the nation and to act as an impartial enforcer of transparent markets and a prudent money/credit system.

(I say generally, as Jefferson was persuaded to execute the Louisiana Purchase, a decidedly Federal project of expansion, and he kept the Bank of the United States intact under his able Secretary of the Treasury, Albert Gallatin.)

The proper role of the Federal government in Madison's view was to act as a "disinterested and dispassionate umpire between different passions and interests."

In my analysis, the political Aristocracy running the U.S. has fulfilled Madison's nightmare, as it effectively operates a monarchical Empire on the Roman model. Though Louis XIV of France famously held that "L'etat, c'est moi"-- the state, it is me-- in the Roman and British empires, the monarchy/emperor system was a functional oligarchy in which the supposedly absolute monarchy/emperor had to consider the views and interests of the aristocracy.

A monarchical Empire is thus operated by a small aristocracy with a shared world view (i.e. Empire) and a very limited spectrum of opinions: that is the American Central State in a nutshell.

Alexander Hamilton, also a Federalist, understood the critical role of credit in fueling innovation, expansion and trade. He favored a central bank that issued sound money and prudent credit, on the 1780s Bank of England model. That the central bank would become the subservient handmaiden of private investment and commercial banks was incomprehensible.

Here is what has been lost in the debt-serf America we now inhabit: Albert Gallatin observed that America's rapid, diversified economic development resulted from "the absence of those systems of internal restrictions and monopoly which continue to disfigure the state of society in other countries."

If only our "leaders" read or understood Madison, Hamilton and Gallatin. But alas, they are supremely ignorant Oligarchs through and through, pleased to enforce debt-serfdom and then buy the complicity of the serfs with Federal entitlements and subsidies.

That too is the Roman model: a dysfunctional debt-based Empire ruled by a self-serving Elite which buys the complicity of its serfs with bread and circuses.


NOTE: gifts/contributions are acknowledged in the order received. Your name and email remain confidential and will not be given to any other individual, company or agency.
Thank you, George S. ($10), for your most generous contribution to this site --I am greatly honored by your support and readership.