The velocity of money is in free-fall, and borrowing, squandering and printing trillions of dollars to prop up a diminishing-return Status Quo won't reverse that historic collapse.

Courtesy of Chartist Friend from Pittsburgh, here are three charts overlaying the velocity of money and the Federal surplus/deficit. The charts display the three common measures of money: M1, M2 and MZM. From the St. Louis Federal Reserve site:

M1 includes funds that are readily accessible for spending. M1 consists of: (1) currency outside the U.S. Treasury, Federal Reserve Banks, and the vaults of depository institutions; (2) traveler's checks of nonbank issuers; (3) demand deposits; and (4) other checkable deposits (OCDs).

The correlation of deficit spending and money velocity is especially striking in the chart of M2 velocity. 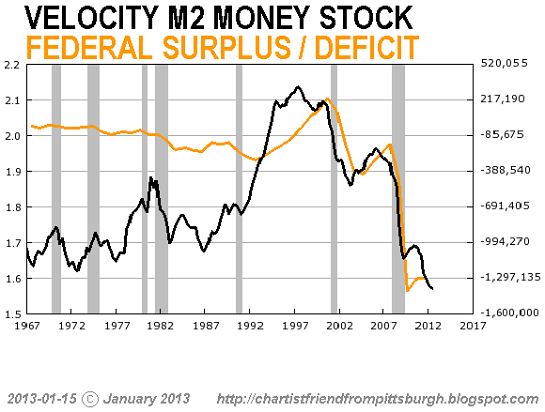 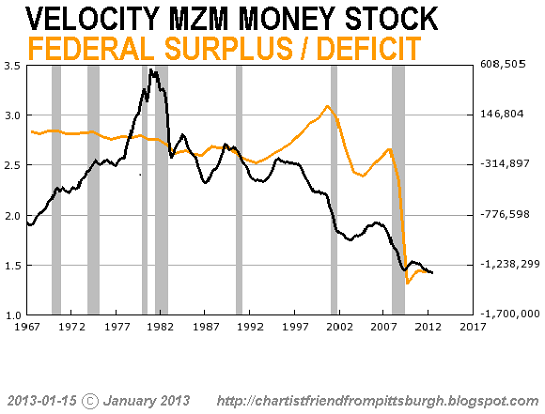 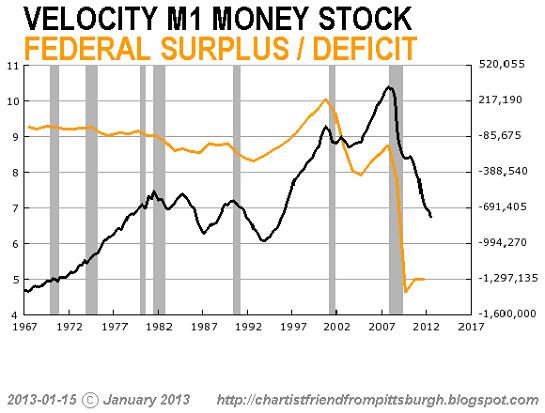 Alternatively, both declining money velocity and soaring deficits reflect a contracting, post-credit-bubble economy. It is interesting to compare when the various measures of money velocity bottomed and topped out:

-- M1 velocity rose straight through the inflationary 1970s (no surprise there), chopped around the expansionary 1980s and then climbed along with the Bull market in stocks from 1994 to a peak in 2007, matching the peak in stocks and housing almost perfectly.

-- M2 velocity first peaked during the height of inflation in 1981 (when interest rates also peaked), bottomed in 1987 and then tracked the stock market and economy higher, reaching a much higher peak in 1997, much earlier than M1 velocity. M2 fell substantially to a low in 2002 and then rebounded modestly to a lower peak in 2007, after which it collapsed.

The most striking feature of these charts is the complete collapse of money velocity. MZM and M2 have collapsed to historic lows, while M1 has fallen back to 1982 levels.

In this context, we can view unprecedented Federal deficit spending as a misguided attempt to compensate for the implosion of money velocity. I say "attempt" because the Treasury borrowing and blowing $6 trillion over the past five years and the Federal Reserve printing $2 trillion, backstopping the parasitic financial cartel with $16 trillion and buying over $1 trillion each of mortgage securities and Treasury bonds has only kept the economy stumbling along at essentially zero growth while real wages have declined by 7% to 9%.

This stupendous creation of money and unprecedented fiscal stimulus has had zero effect on money velocity. This conclusively shows that fiscal and monetary stimulus are not fixing what's broken with money velocity.

Please see these entries for more on why this is so:

Why Austerity Is Triggering a Crisis (January 7, 2013)

Keynesian stimulus policies (deficit spending and low-interest easy money) create speculative credit bubbles. As the above charts illustrate, post-bubble economies do not respond to additional stimulus because the economy is burdened by impaired debt and phantom collateral.

In sum, the U.S. economy is a neofeudal debt-serf wasteland with few opportunities for organic (non-Central Planning) expansion. As a result, the velocity of money is in free-fall, and borrowing, squandering and printing trillions of dollars to prop up a diminishing-return Status Quo won't reverse that historic collapse.

Put another way: we've run out of speculative credit bubbles to exploit.


New instrumental song (5:36) by CHS and Coconut Cosmos: Alex and Daz Theme (raggae/rock/jazz with a blistering solo--don't miss it!)


LAST WEEK OF DISCOUNTS: My new book Why Things Are Falling Apart and What We Can Do About It is now available in print and Kindle editions--10% to 20% discounts.


NOTE: gifts/contributions are acknowledged in the order received. Your name and email remain confidential and will not be given to any other individual, company or agency.
Thank you, Barney S. ($5), for yet another extremely generous contribution to this site --I am greatly honored by your continuing support and readership.