The fundamentals of demographics, stagnant household income and an overbuilt retail sector eroded by eCommerce support only one conclusion: commercial real estate in the U.S. will implode as retail sales and profits weaken.

The first installment of our series on U.S. real estate by correspondent Mark G. focused on residential real estate. In Part 2, Mark explains why the commercial real estate (CRE) market is set to implode.

In the early stages of the sub-prime mortgage crisis it was widely believed that US commercial real estate (CRE) would manage to dodge the bullets. In the end CRE was found to be as vulnerable as anything else. 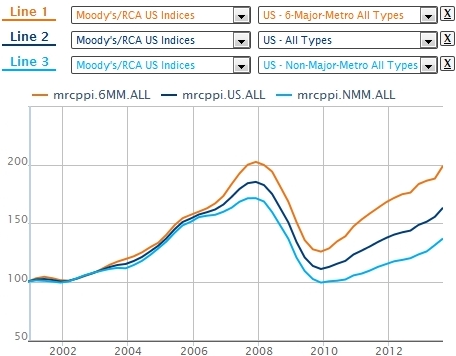 These three graphs of relative prices show that in CRE the core is doing better than the periphery. The gap in relative price performance of major metro CRE over smaller cities and towns has approximately doubled from where it was in 2008.

And as with residential real estate, some CRE sub-sectors and cities are obtaining far greater benefit from bailout, stimulus and quantitative easing programs than other areas:

Commercial real estate has a more complex structure than residential real estate. There is greater specialization in function. For instance strip shopping centers and indoor malls are generally not exchangeable with warehouse facilities.

We can simplify this a bit by classifying CRE by consumer sector and function. Industrial real estate will not be considered in detail. Current industrial construction spending is near a record high. But the value of current industrial CRE can still be depressed due to existing plant obsolescence and rapid shifts in activity location.

This leaves us to consider consumer retail and consumer service CRE. 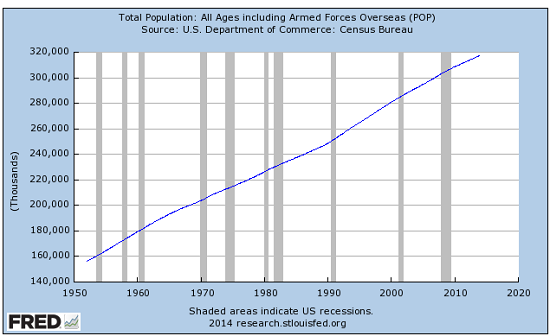 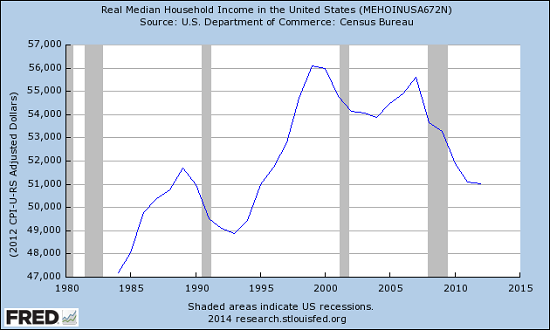 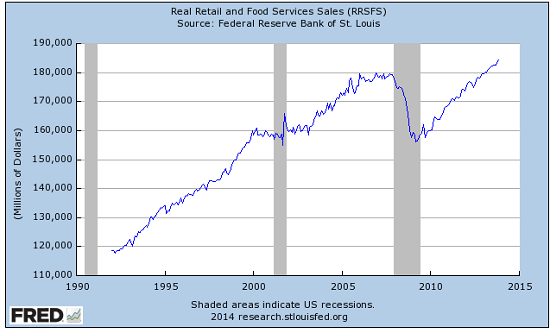 Real inflation adjusted total retail spending has increased slightly over its peak in 2007. 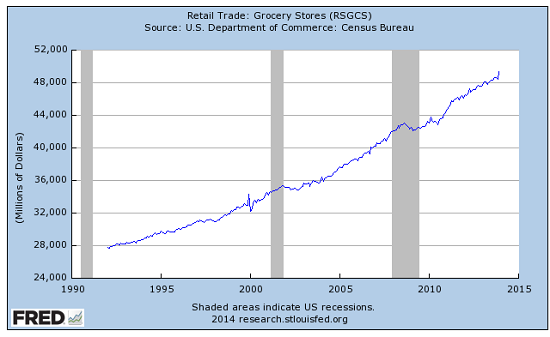 Essentially all of this increase has occurred in food spending. (A smaller portion has gone into clothing). And this is the only reasonable expectation given the twin conditions of an increasing total population and a declining average income per consumer. We can also note that food is a miniscule part of eCommerce. The retail food trade occurs almost entirely in neighborhood groceries, markets and convenience stores. The other non-food retail sectors are flat to declining. But within these sectors there is a large zero-sum game being played out between eCommerce and local bricks n mortar stores:

The Rise of eCommerce 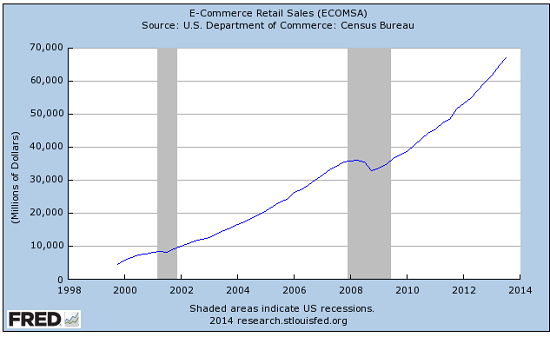 Since 2008 eCommerce retail sales have nearly doubled. But as we just saw, the entire increase in total consumer spending since 2008 is accounted for by the increased food sales which occur at local markets. eCommerce is therefore taking sales away from other local retail sectors. And the biggest single loser is: 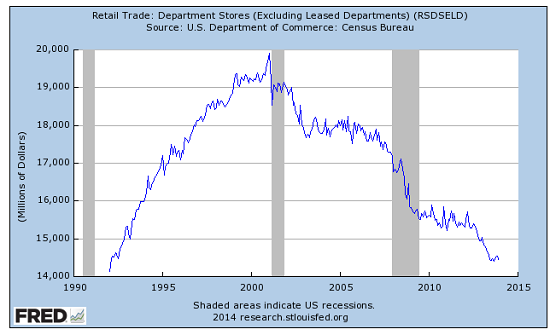 This macroeconomic data is well-supported by the current financials of both Sears and JC Penney. Sears trailing twelve month (ttm) earnings per share are - $14.11. This loss will increase once Sears reports its fourth quarter earnings at the end of February, 2014. Sears is widely expected to lose one billion dollars in 2014. J.C. Penney meanwhile is currently reporting ttm losses of -$7.32 per share.

One or both of these chains will be in bankruptcy by 2015 even if the current recovery continues. And outright liquidation of one or both companies is at least as likely as reorganization. There is little reason to believe either of these companies would be more viable following mere debt reduction.

The third major department store chain is Macys, which is still reporting profits. Oddly enough Macys management celebrated their 2013 holiday season by announcing 2,500 permanent layoffs from their local retail department stores. This was paired with a mid-December announcement of an increase of 1,500 employees in a new eCommerce fulfillment center in Oklahoma.

In these circumstances it is unsurprising that retail CRE prices are showing weak recovery. 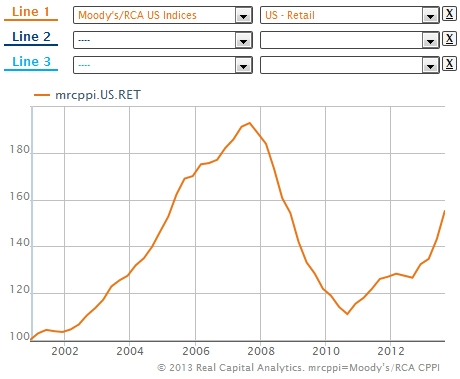 There are approximately 1,100 indoor shopping malls in the USA. Sears has about 2,000 stores. JC Penneys has almost exactly 1,100 stores. There are very few malls that dont have at least one of these chains. The vast majority of malls have both as major anchor stores. Macys is typically the third major anchor now. A regional department store chain or two round out the large anchor stores.

A virtual stroll down the typical mall concourse will reveal plenty of other money losing chain retailers with names like Radio Shack et al.

Every time a mall store closes shoppers lose another reason to go to the mall. Dead mall syndrome will soon afflict most of this sector.

In addition to decaying tenant revenues, the mall owning Real Estate Investment Trusts are dangerously overleveraged with low-cost to free ZIRP and QE funding. Now that the Federal Reserve is tapering QE, their financing costs will be rising as commercial balloon mortgages come due and have to be rolled over. And since the typical commercial mall mortgage does carry a large balloon payment at the end, they have to be refinanced. Assuming honest loan underwriting a higher risk premium will also be attached due to the deteriorating retail fundamentals of the tenants.

General Growth Properties (GGP) is probably in the best condition. This is because GGP just exited a Chapter 11 reorganization in 2010. It was placed into involuntary bankruptcy in 2009 by two mortgagors holding matured recourse balloon mortgages. GGP was understandably unable to refinance these balloons in the spring of 2009.

This entire sector will collapse when the next recession appears.

And since history hasnt ended, the next recession will appear at some point. It may be appearing already. At the beginning of October, 2013 the analyst consensus for retail profit growth for the strongest October  December holiday quarter was 5.5%. At the beginning of the reporting cycle in January expectations were down to 0.5% profit growth. That is a 90% reduction in analyst expectations in just three months.

Barring a turnaround, many retail chains still reporting profits will be reporting quarter-on-quarter profit declines in April. And by the end of the third quarter more will start reporting outright losses.

Part 3 will examine the other major part of local consumer oriented CRE. These are consumer services like neighborhood banking, investment, insurance and other services. Experience to date demonstrates that in the next few years the internet, expert software systems and robotics/automation will eliminate 50% and more of the jobs formerly associated with these businesses. These same trends will also shift most of the surviving positions away from the traditional storefront strip center and local office park locations.

Thank you, Mark, for this comprehensive analysis. We look forward to reading Part 3.


Of related interest: The Retail Death Rattle (The Burning Platform)