All the phantom wealth piled up in China's boost phase is now melting down, and the China Syndrome will trigger a meltdown in global phantom assets. 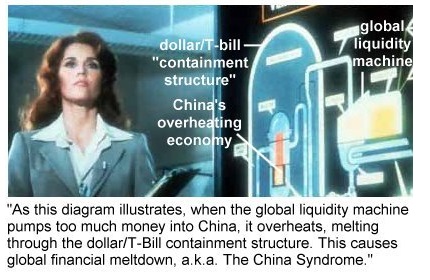 In today's world, the financial meltdown in China has burned straight through the global financial system to the U.S. financial markets. The mainstream financial media is delighted to promote the many links between the U.S. and Chinese economies when the two economies are feeding each other's expansion in a tightly coupled virtuous cycle.

But once China's slowdown starts impacting the American economy, the mainstream financial media trundles out the usual pundit suspects to declare that the U.S. and Chinese economies are decoupled, so a meltdown in China will have little impact on America--and vice versa.

The rationalizations for this decoupling are many--and specious. Exports are actually only 10% of China's economy, we're assured, so any slowdown in China will be modest and of little relevance to the U.S. economy.

Various experts also assure us that China's vast stash of foreign reserves and U.S. Treasuries will enable it to quickly smooth over any spot of bother in its currency (RMB/yuan) resulting from capital flight out of China.

None of these rationalizations change the fact that China is integral to the global financial markets, and so its slowdown and capital flight are toppling carry trade and other risk-off financial dominoes.

China is tightly coupled to the U.S. and global economies via capital flows and supply/demand. It's important to understand that demand drives profits on the margins: of ten sales, the first nine sales just cover production and overhead costs; only the last sale generates substantial profits.

This decline in marginal demand is crushing commodity-based economies and triggering recessions as profits, sales and wages all decline.

The tidal wave of cash flooding out of China has provided marginal demand for high-priced real estate in Europe and the U.S. From London flats to Chateaux in France to single family homes in Vancouver B.C. and Southern California, trillions of yuan have escaped China and flowed into pricey real estate, pushing prices into the stratosphere.

Now that trillions of yuan of phantom wealth are disappearing in China, those immense capital flows into Western assets are drying up. A staggering percentage of China's household wealth is tied up in illiquid and overvalued real estate. The wealth that is yet to be lost as China's markets transmit the reality that the fuel of financialization has been consumed and the resulting losses will be in the trillions of dollars, not yuan.

The fundamental context is that China's economy has traced out an S-Curve--as have previous fast-developing nations such as Japan and South Korea.

The S-Curve can be likened to a rocket's trajectory: first, there's an ignition phase, as the fuel of financialization and untapped productive capacity is ignited.

The boost phase may last for several decades as credit-fueled production and consumption expand:

But then the fuel of financialization is consumed, and the previously fast-growing economy coasts on momentum. Depending on how much leverage, corruption and wealth has piled up in the boost phase, this phase may last a few years. This is the top of the S-Curve.

As the economy weakens, the momentum is to the downside. Everything that worked in the boost phase--every investor and leader was a genius and could do no wrong--reverses: nothing works any more. Investors lose every bet and leaders' efforts to reverse the decline are ham-handed failures.

This decline is inevitable in fast-expanding economies that play fast and loose with credit/debt and leverage. All the phantom wealth piled up in China's boost phase is now melting down, and the China Syndrome will trigger a meltdown in global phantom assets.

Admin note: I will be busy with family commitments this month. As a result, blog posts will be sporadic and email responses will be near-zero. Thank you for your understanding.

My book on the emerging economy is now available as a audiobook: Get a Job, Build a Real Career and Defy a Bewildering Economy (Audible.com).

My new book is in the top 10 of Amazon's Kindle ebooks > Business & Money > International Economics: A Radically Beneficial World: Automation, Technology and Creating Jobs for All. The Kindle edition is $9.95 and the print edition is currently discounted to $20.82.