Trump as Lightning Rod--Not Just for Disaffected Progressives, But For Panicked Insiders

The Eastern Establishment fears and loathes Outsiders, and seeks to destroy them, usually via the mainstream media.

Political agnostics who are skeptical about Big Government "solutions," left or right, view the current hullabaloo about the Trump presidency with some detachment. What's remarkable to us is the extremism, not just of those bitter about Clinton's loss, but by insiders who are threatened by the possibility Trump may upset their insider skims and scams.

As an opening observation, I don't recall bitter Nixon supporters issuing death threats to performers at John Kennedy's inauguration in 1961--and the 1960 election was extremely close.

I also don't recall bitter Gore supporters issuing death threats to performers at G.W. Bush's inauguration in 2001--even though the 2000 election came down to a few hundred votes in Florida.

Trump is a lightning rod for a spectrum of people and organizations. Let's see if we can separate the spectrum into socio-political groups. 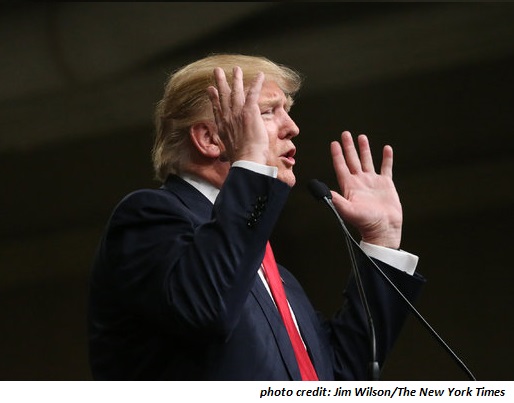 In times of turmoil, identifying a bogeyman/woman as the cause of the turmoil is a classic mechanism for shirking responsibility and agency. This is the psychological source of witch-hunts (it's all the witches' fault!), scapegoating, show trials, and so on: it isn't our fault things are falling apart, or the fault of our institutions--it's the bogeyman/woman's fault.

This transference/projection concentrates the blame and responsibility on The Other--a scapegoated group, or even better, one individual or a small group. Those making the accusation reckon pointing the finger at some target lets them off the hook: I am blameless, it's all his/her fault.

Trump is tailor-made for the part of Bogeyman--ditto the Russians. Decades of films depicting the heroic Americans besting the low-down dirty Commies seem to have seeped into the American Id: when in doubt, blame the Russians. If they are temporarily unavailable for scapegoating, then blame an Asian bogeyman.

For Progressives, symbolism is more important than substance. Never mind that the incomes, wealth and opportunities of the bottom 95% have steadily eroded in the eight years of the Obama presidency, or that an American neocon-neoliberal foreign policy was running amok globally. To Progressives steeped in the mythology of political correctness, the symbolism of the speech acts being uttered mattered far more than the substance or the consequences.

President Obama did not just promise hope and change--he was a legal-eagle master of delivering the symbolic speech acts that Progressives longed to hear, because they confirmed the world-view of legalisms, "rights," and all the other high points of the mythology of political correctness.

In other words, we don't actually have to threaten the status quo by changing anything, all we have to do is utter the correct phrases, and the erosion of civil liberties, opportunity and wealth will all magically vanish in the warm and fuzzy phraseology of political correctness.

The Clintons masterfully worked their way into the Insider Circle, despite starting on the Outside.

Once you understand this narrative, you realize the party affiliation of the candidate is simply a matter of convenience; what really matters is their standing within the traditional Eastern Establishment. Will they faithfully carry water for the Establishment, i.e. be a loyal Insider, or do they pose a threat to the power and wealth of the Insiders, i.e. an Outsider?

The Eastern Establishment fears and loathes Outsiders, and seeks to destroy them, usually via the mainstream media. That the corporate media targeted Nixon is well-known. Though few discuss it now, it was equally true that the corporate media ceaselessly bashed and ridiculed Jimmy Carter, "peanut farmer," goofy grin, etc. After he was safely out of office and couldn't threaten the Eastern Establishment's power, skims and scams, Carter was quickly rehabilitated.

The Establishment's fear and loathing is laughably obvious. Why else drum up the hysterical, absurd narrative that Russia is responsible for Trump's election? The entire media blitz was a transparent attempt to discredit the results of American democracy because the Insider unexpectedly lost. Now the Establishment--from academia to the C.I.A.--is in full-blown panic, because all their precious skims and scams are for the first time in decades, at risk of being throttled or reduced.

Trump isn't just a lightning rod for delusional Progressives who were happy to see their real-world fortunes erode away as long as the Insiders in charge kept muttering the desired symbolic speech acts; he is also a lightning rod for Insiders fearful that their Insider apple cart is about to be upended, and they might actually have to work for a living, or actually compete in the real world--something they know they are ill-prepared to survive.