Why Our System Is Broken: Cheap Credit Is King

Cheap credit--newly issued money that can be borrowed at low rates of interest--is presented as the savior of our economic system, but in reality, it's why our system is broken. The conventional economic pitch goes like this: cheap credit enables consumers to buy more goods and services (and since the system needs growth or it implodes, that's good).

Last but not least, low rates of interest enables the government at all levels to borrow money at relatively low cost.

That all sounds good in theory, but let's see how cheap credit works in the real world.

The first thing we observe is those closest to the central bank credit spigot get the lowest rates and nearly unlimited lines of credit. J.Q. Citizen may be thrilled to get a 4% annual-rate mortgage, but the mega-millionaire closer to the credit spigot can borrow 10 times as much as J.Q. can, and at half the rate of interest.

Mega-corporations and financiers can borrow billions at rates as low as 1%, which given an official inflation rate of 2%, is actually a negative rate of real interest.

Money-center banks own the credit spigot, so they can create money out of thin air at .5%.

In other words, cash isn't king in this perverse system: cheap credit is king. Those with access to cheap unlimited credit can scoop up all the productive assets, greatly increasing their wealth--and they can buy the political class, too, with campaign contributions and donations to false-front foundations.

Here's an example of the perverse incentives and unintended consequences this unlimited credit unleashes in the real economy. Let's say I'm a financier who is close to the credit spigot. I borrow $100 million at 1.25% (or sell $100 million in bonds yielding 1.25%) to buy a company that yields 4.25% in after-tax profits. 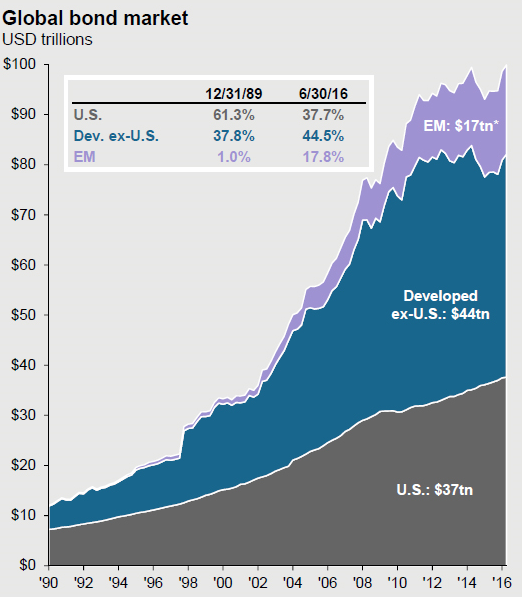 Buying the $100 million company costs me nothing but the monthly interest payments. Since the company yields 4.25%, I am already netting a 3% return.

But why settle for a meager annual income of $3 million for doing absolutely nothing? If I sell 80% of the company to pension funds and other institutions for $100 million, I can pay off the $100 million I borrowed to buy the company and keep the 20% I now own free and clear. This transaction nets me $20 million profit for doing nothing but leveraging my access to cheap credit to buy real assets.

If I hold my $20 million stake, it earns a hefty $850,000 annually--once again, for doing nothing but accessing cheap unlimited credit.

In other words--anyone who can borrow $100 million at low rates of interest is instantly wealthy because they can outbid everyone who has to pay higher rates to buy productive real assets.

This is why our system is broken: cheap credit has enabled the rich to become immensely richer while producing nothing of value--no additional goods or services have been produced by these financier skims. My example is just one example of many such skims: corporations borrowing billions on the bond market to buy back shares is another. 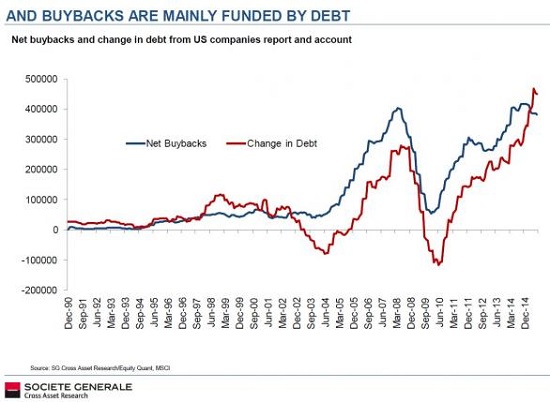 Compare J.Q. Public's struggle to buy a home with the ease of financiers buying hundreds of homes. After years of scrimping and saving, J. and Suzy Q. have saved up the 20% needed to buy a $200,000 home with 20% down ($40,000). Careful analysis of local rents and other methods of valuing housing suggest the house would be a bargain at $180,000 and a bit rich at $220,000--above that, it isn't worth buying as the costs of the mortgage are too high compared to the rent that the house would fetch.

The financier with $100 million in cheap credit has no such difficulties. He doesn't need any cash down--he borrows $100 million from a money center bank or from the bond market. Since his borrowing costs are half of J. Suzy Q's mortgage expenses, he can bid $250,000 for the home, blowing J. and Suzy completely out of the bidding.

And since the financier knows the central banks are busy spewing trillions in new cheap credit to those closest to the credit spigot, he knows he can flip the house to another institutional owner for a hefty profit. Cheap unlimited credit inflates asset bubbles, which benefit those who bought the assets cheap with cheap borrowed credit. 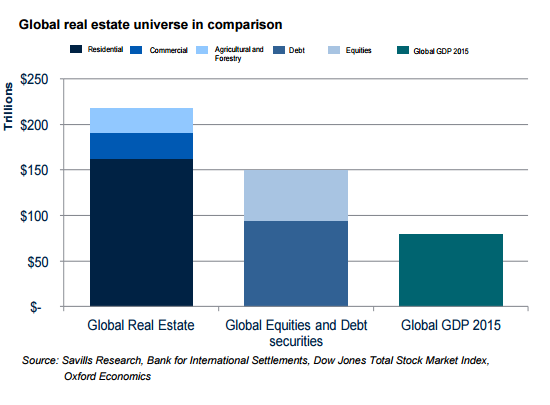 So the house is sold for $350,000 a few years later to an institutional buyer. J. and Suzy Q. are now completely priced out of the market; they now need $70,000 down, and they remain at a disadvantage because their mortgage has a much higher rate than the debt of the financiers who are competing with them. 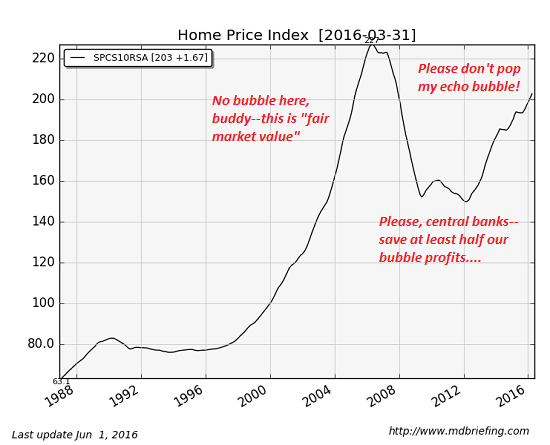 Cheap unlimited credit for financiers and corporations has incentivized parasitic, zero-productive churning of credit and capital and inflated bubbles that enriched the wealthy. Sure, the top 5% who own stocks, shares of enterprises and homes in left and right-coast hot-spots have done very, very well for themselves--but nowhere near as well as those at the top who have leveraged cheap unlimited credit into billions in risk-free profits.

You want to fix the economic system, reduce political bribery and reduce rising income inequality? Shut off the cheap unlimited credit spigot to banks, financiers and corporations. If everyone with good credit had to pay 6% to borrow money, regardless of their position in the wealth-power pyramid, perverse incentives for parasitic skimming would take a major hit.