Our Financial Buffers Are Thinning

The fragility of our financial buffers will only be revealed when they fail in the next crisis.

While buffer has a specific meaning in chemistry, I am using the word in the broad sense of a reserve resource that absorbs the initial destructive impacts of crises or system overloads. Marshland along a sea coast is a buffer against destructive storm waves, for example.

A savings account acts as a buffer against financial drawdowns or losses of income that would otherwise quickly cascade into a full-blown crisis.

Redundancy of resources can act as a buffer. If an airline maintains an aircraft in reserve, this reserve plane acts as a buffer against the disruption to the airline's scheduled flights should one of its aircraft be unexpectedly removed from service by a mechanical failure. The reserve aircraft can replace the plane that was withdrawn from service with minimal disruption.

Stockpiles act as buffers against supply disruptions. A storage tank of oil buffers a refinery against any delay in its incoming shipments of crude oil. Supplies of food and water buffer against severe natural disasters that disrupt regional water service and food deliveries.

Credit can act as a financial buffer against unexpectedly high expenses or declines in revenue. If a tire on our vehicle goes flat during a road trip and we only have a few dollars cash, a credit card buffers the disruption by funding the replacement tire and labor.

But over-using credit can end up thinning our financial buffers. If someone starts using their credit card not as an emergency buffer but to augment their cash income--in effect, acting as if the borrowed money was a pay raise rather than a loan--their credit line diminishes to near-zero and when they actually need credit for an emergency, it's no longer available.

A key feature of buffers is that it's difficult for observers to tell if they've been thinned to the point where they can no longer stave off disruption. Outside observers can't tell if the oil storage tank is full or empty, or if an individual's credit card is maxed out or has a completely untapped credit line.

In terms of our economy, there are indications that our financial buffers are thinning to the point of failure. Millions of households have less than $500 savings--an essential, basic buffer against unexpected expenses.

Millions of households have borrowed money to make up for stagnating or declining income. Charting master Lance Roberts of Real Investment Advice published this chart showing how debt has been used to maintain households' standards of living: 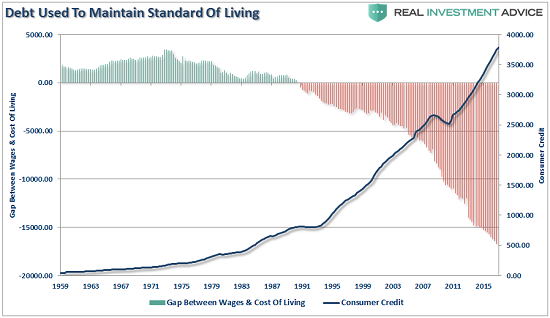 The ability of governments to borrow and spend during recessions is a key macro-economic buffer. But instead of slowing fiscal borrowing and spending, the U.S. government has ramped up borrowing immensely, thinning the buffer available for future fiscal stimulus:

If we survey the financial landscape for fully intact buffers, we find none. Every buffer has been thinned by the past eight years of extreme monetary and fiscal policies and financial leverage, that is, debt piles ever higher on an unchanged foundation of collateral.

All the buffers that absorbed the shock waves of the 2008-09 Global Financial meltdown have been drained or thinned to the point that they no longer have the capacity to absorb the next global financial crisis. From the outside, the "tank" may appear full, but it's almost empty.

The fragility of our financial buffers will only be revealed when they fail in the next crisis.