The Real Cause of the Opioid Epidemic: Scarcity of Jobs and Positive Social Roles

The employment rate for males ages 25-54 has been stairstepping down for 30 years, but it literally fell off a cliff in 2009.

We all know there is a scourge of addiction and premature death plaguing the nation, a scourge that is killing thousands and ruining millions of lives: the deaths resulting from the opioid epidemic (largely the result of "legal" synthetic narcotics) are mounting at an alarming rate:

The unsavory truth was reported by the Los Angeles Times last May (2016) in a scathing investigative series: 'You Want a Description of Hell?' Oxycontin's 12-hour problem.

There are plenty of other participants who share responsibility for the public health and law-enforcement disaster: physicians who all too readily passed out prescriptions for powerful synthetic opioids like aspirin; the government agencies that approved the synthetic heroin as "safe" (heh) and paid for their distribution via Medicaid, the Veterans Administration, etc., and the patients who all too willingly accepted the false promises of synthetic opioids.

But what's missing from the public conversation is the underlying cause of the epidemic: a structural scarcity of paid work and positive social roles for vast swaths of America's workforce.

We all know what paid work means: jobs. Positive social roles include jobs--supporting oneself and one's family provides purpose, meaning, identity and a source of pride, all atrributes of positive social roles--but the concept extends beyond work to any role in which the participant feels needed and that offers dignity: this includes volunteer, guardian, mentor, coach, etc., many of which are unpaid.

A significant essay in the March/April issue of Foreign Affairs describes The Dignity Deficit: Reclaiming Americans' Sense of Purpose (subscription or registration required)

At its core, to be treated with dignity means being considered worthy of respect. Certain situations bring out a clear, conscious sense of our own dignity: when we receive praise or promotions at work, when we see our children succeed, when we see a volunteer effort pay off and change our neighborhood for the better. We feel a sense of dignity when our own lives produce value for ourselves and others. Put simply, to feel dignified, one must be needed by others.

The recent decline in male employment in the peak earning years (ages 25-54) is striking: the employment rate for males ages 25-54 has been stairstepping down for 30 years, but it literally fell off a cliff in 2009. Is it coincidental that the opioid epidemic took off around 2010? I don't think so. 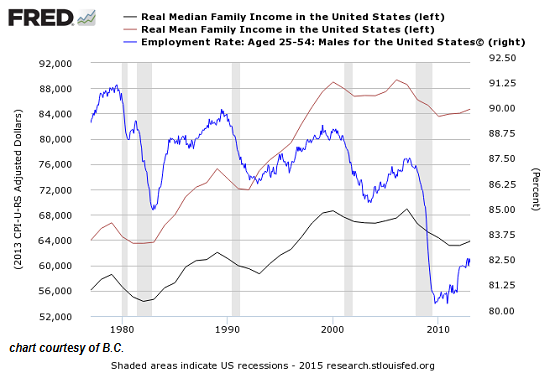 How do you support a consumer economy with stagnant incomes for the bottom 90%, rising basic expenses and crashing employment for males ages 25-54? Answer: you don't. The males working in two-income families in the top 10% of the work force are doing just fine. It's the bottom 50% of households that earn a fraction of the top 10% that reflect the decline of paid work for males below the top 20% or so: 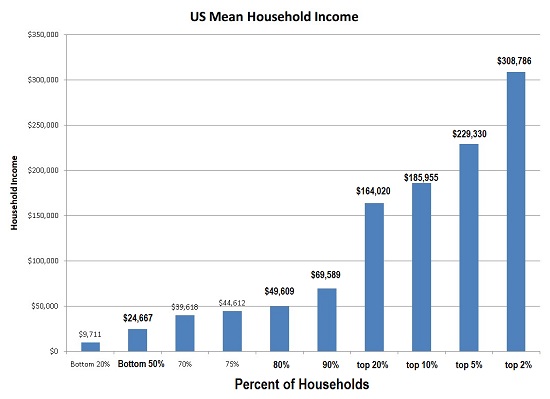 The labor force participation rate (percentage of the civilian populace that is in the labor force, i.e. either working or actively seeking employment) has been crashing since 2000. 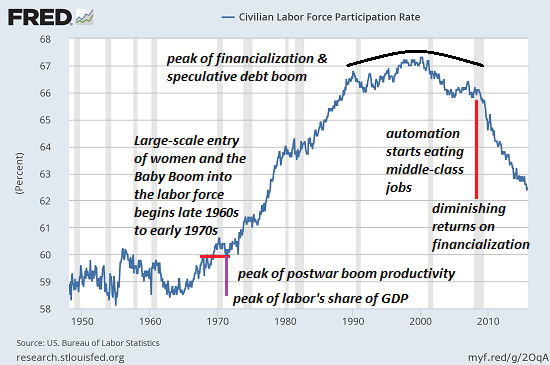 The participation rate of males has been in structural decine for decades. The entire 30-year boom in employment from 1970 to 2000 bypassed much of the male labor force. 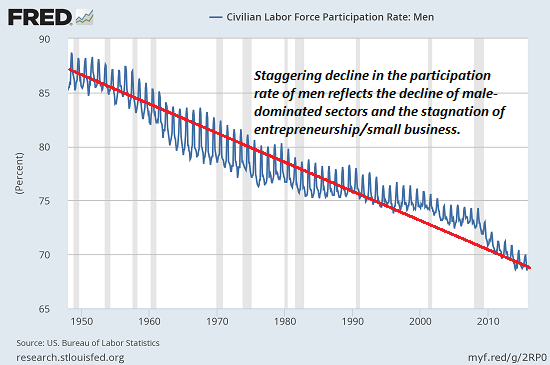 Faced with a scarcity of jobs and social roles that provide the dignity of being needed and productive, people slip into the toxic depths of the opioid epidemic. As I keep saying here, We Need A 'Third' Economy, a community economy that provides an abundance of both paid work and positive social roles. I outline such a system in my book A Radically Beneficial World.