Just how bad could the housing bust get? How about half of all urban homes being in foreclosure? As stunning or unbelievable as that may sound, it already happened once in the U.S., in the Great Depression, as documented in this report: Lessons from the Great Depression (St. Louis Federal Reserve).

Though history doesn't repeat, it certainly echoes, and the parallels between the present and 1934 are particularly sobering. The only "missing ingredient" to a full-blown depression is job loss/income contraction, and many of us foresee a long, painful wave of lay-offs and downsizing on a global scale just beginning.

How did half the nation's urban housing end up in foreclosure? All too easily, it seems; eerily, the slippery slope seems remarkably like the present:

Here are excerpts from the report:

A study of 22 cities by the Department of Commerce found that, as of January 1, 1934, 43.8 percent of urban, owner-occupied homes on which there was a first mortgage were in default. The study also found that among delinquent loans, the average time that they had been delinquent was 15 months.

Among homes with a second or third mortgage, 54.4 percent were in default and the average time of delinquency was 18 months. Thus, at the beginning of 1934, approximately one-half of urban houses with an outstanding mortgage were in default (Bridewell, 1938, p. 172).

For comparison, in the fourth quarter of 2007, 3.6 percent of all U.S. residential mortgages and 20.4 percent of adjustable-rate subprime mortgages had been delinquent for at least 90 days.

Thus, consistent with Fishers (1933) classic "debt-deflation" theory, the burden of outstanding mortgage debt increased sharply during the contraction phase of the Great Depression and economic recovery did not begin until the real value of outstanding debt had begun to decline. 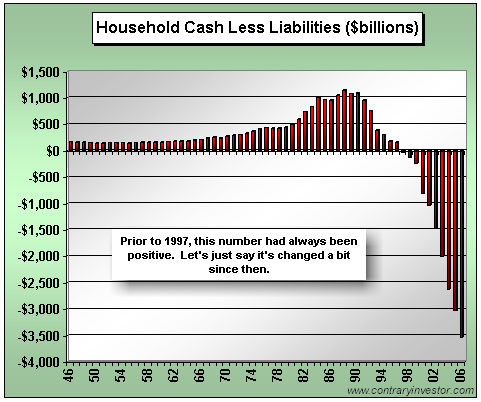 As residential property became increasingly leveraged during the 1920s, the declines in household incomes and wealth after 1929 made servicing that debt especially difficult for homeowners.

Thus, on the eve of the Great Depression, many homeowners were not well positioned to withstand the substantial decline in income or house prices that would occur over the next three years.

Refinancing was common and easily accomplished in the 1920s, an environment of rising incomes and property values, but next to impossible during the Depression. Falling incomes made it increasingly difficult for borrowers to make loan payments or to refinance outstanding loans as they came due.

The report details how loose lending standards during the 1920 Housing Boom contributed to the severity of the Bust:

Thus, although the proximate cause of the high rate of loan delinquencies and foreclosures during the 1930s was the economic depression, the likelihood of default on any given loan apparently was influenced by the characteristics of the loan itself.

Do you reckon that 20% default rate in the subprime mortgage market reflects a similar dynamic?

In another parallel, the state and Federal governments jumped in to "solve" the problem with new government-backed refinancing and by "freezing" the foreclosure process.

Interestingly, the Pareto Principle's 20% (the 80/20 rule) shows up twice: the Federal agency created to refinance every homeowner in trouble ended up owning 20% of all mortgages in the country, and 20% of those mortgages still entered foreclosure.

33 states enacted legislation providing relief for those with delinquent mortgages, including 28 states that imposed moratoria on home foreclosures (Poteat, 1938).

The Home Owners Loan Corporation (HOLC) was created as an agency of the Federal Home Loan Bank Board by an act of Congress in 1933. The HOLC was authorized for a period of three years to purchase and refinance delinquent home mortgages, including mortgages on properties that had recently been foreclosed on.

Still, as late as 1941, the HOLC held about 10 percent of the value of outstanding residential mortgage debt. Of the approximately one million loans made by the HOLC, some 20 percent ended in foreclosure or voluntary transfer of the underlying property to the HOLC. Foreclosures peaked during the recession of 1937-38.

The justification for government intervention remains the same as well:

The right of lenders to foreclose on collateral is the main reason why the interest rates on secured loans, such as home mortgages, are typically much lower than those on unsecured loans, such as credit card debt. Ordinarily, mortgage foreclosures receive little notice from the public because they have little impact on parties other than the delinquent borrower.

Are there any differecnes between then and now? The report's author worries that there is one key difference: the appetite for risk is so pervasive and ravenous now that any bail-out may well feed further speculative lending. And moratoriums, as popular as they might be politically, merely hinder the "work-through" required to restore the credit markets:

Some policies, including a government bailout of delinquent loans or expanded loan guarantees, could also encourage increased financial risk-taking and thereby lead to further instability in the future.

Other actions, such as a government-imposed moratoriumon loan foreclosures, could simply delay inevitable adjustments that are necessary to restore the functioning of mortgage and housing markets.

Such direct government intervention could also increase the cost of loans for future borrowers by encouraging lenders to add a premium to loan interest rates to compensate for the risk that government officials might re-write the terms of loan contracts.

Conceivably, a bailout would more likely encourage risky behavior in the present situation (in which lax underwriting was an important cause of the increase in defaults) than during the Depression (when a sharp decline in economic activity was the main cause of defaults).

So what finally restored the housing/credit markets and the U.S. economy? Borrowing and spending trillions of dollars to fight World War II. (The U.S. government borrowed about $500 billion during the war which adjusted for inflation would be trillions in current dollars.)

Unfortunately, that's not an option now; we've already borrowed trillions to fight distant wars and other government spending, and we've relied not on domestic savings but on willing foreign buyers of our debt to do so.

As the global economy contracts, so will global savings which can be channeled into buying U.S. T-bills and other debt. Since we'll be unable to "borrow our way out of this mess," then what is the ultimate solution? Start saving and investing, and write off the trillions in bad debt crippling the credit markets.

The government propaganda machine and the TV pundits will have you believe there will be no recession and no job losses. We shall see who's right: the cheerleaders and their ginned-up statistics, or those of us who see severe job losses as the inevitable consequence of a credit contraction.

Thank you, T. Simms ($25), for your unexpected and very generous donation via mail to this site. I am greatly honored by your support and readership.