One of the more pernicious side-effects of spiraling healthcare costs is the weight they're adding to U.S. city, county and municipal agency budgets just as revenues are plummeting and fuel/input costs are skyrocketing. 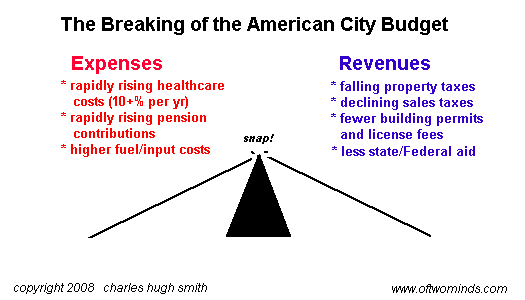 Every city, university, transit agency, school district and local government entity which has promised public union employees (labor and labor overhead is typically about 75% of their budgets) full healthcare insurance and plummy pensions in "good times" is now facing the unhappy fact that these labor benefits are completely unaffordable in an era of falling revenues and shrinking pension fund earnings.

With revenues plummeting from all sources--state and Federal grants, property taxes, building permit fees, real estate transaction fees, sales taxes, business taxes based on gross receipts, fees and on and on--the unsustainability of the promised benefits is starkly revealed.

Adding to the burden is the decline in pension fund returns, which then force the city or agency to ante up more of the pension costs out of current revenues. And with many municipal pensions bloated to levels private sector workers can only fantasize about--80% pay after 20 years, a pension "earned" after only seven years of service, even if you're only part-time, etc.--then the pension-fund deficit is like a fiscal monster eating unprepared local government budgets alive.

Adding to the burden is a bloated payroll which has grown like Topsy in the past decade. If you comb your local city or county budget, you'll very likely find that the payroll "headcount" has expanded considerably since 2000.

Now like every other human being with "entitlements," these employees have a strong sense of, well, entitlement. If the City of Vallejo is any guide, the public unions will grudgingly offer modest snips here and there as expenses are rising by 10% or more and revenues are falling like granite boulders tossed off a cliff.

The first ball has yet to be pitched in the first inning of the recession, so various budget tricks are sufficing for many cities and agencies: dumping spending into the next fiscal year (amazing what miracles can be had by shifting spending a mere week), selling bonds based on future lottery revenues (the latest lunacy here in California), purposely understating expenses and overstating revenues, etc. etc.

But as the ballgame gets under way in earnest, the tricks and smoke-and-mirrors will no long suffice--huge tax increases will be proposed, or huge cuts in payroll will be made, or the city/agency will declare bankruptcy and let the judge void all the unsustainable labor contracts and start over with what actually matches revenues.

Unhappily for the employees and managers, cities and counties can't just print money; they have to live within their revenue or sell "infrastructure" capital improvement bonds.

With housing values dropping, unemployment rising, healthcare premiums and co-pays climbing, and "junk fees" shooting up like rockets--you know, the fee to go to a park, the parking ticket that's now $45, the fishing license that doubled in price, and so on, ad nauseum--taxpayers are in no mood to grant government's wish for huge tax increases so they can cover every employees' family (you really have 12 kids, or are those your siblings' kids you're insuring for "free"?) and fund a pension for everyone who worked 6 or 7 years and then bailed.

As I have suggested here before, pension funds' nifty returns during the past decade were based on the same financial sector flim-flammery which is now blowing up. Real estate is tanking and the stock market won't be far behind. Bonds are supposedly "safe" because "the Fed will keep interest rates low forever," but unfortunately the market sets rates in the real world and rates are rising, making all current bonds in pension fund portfolios about as valuable as 3-day old fish that's been left to "age" in the summer sun.

Corn futures are doing just dandy right now but most pension funds aren't allowed to "speculate" in futures or short the market; and so there really isn't much they can invest in that isn't losing value.

In other words, Pandora's Box has been opened and the contents aren't crowd pleasers. As noted here yesterday, healthcare premiums are rising 10% a year, year over year, and with the financial sector blowing up and the economy tanking, you can forget the fat pension-fund returns--now we have to fund those pensions out of cash revenues even as those revenues shrivel like a lettuce leaf in Death Valley.

While sales receipts of gasoline are rising (due to skyrocketing prices), the sales of everything else is dropping, slashing tax receipts at every level and of every kind. Small businesses and franchises are vanishing like card tables in a hurricane, and they're taking their receipts and taxes with them. 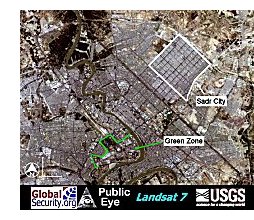 Which brings us to Sadr City (formerly Saddam City/Al Thawra) , the sprawling, notoriously crowded slum in Baghdad, Iraq. As you can see from this satellite photo (courtesy of www.globalsecurity.org), Sadr City is a nicely geometric slum not far from the heavily fortified, clean, well-lighted and well-fed enclave of the U.S.A., The Green Zone. (Such a pleasant sounding name in a desert, eh? I doubt that Orwell could have done any better.)

With absolutely no pleasure, since I live in a city heading for massive cuts or insolvency, I submit Sadr City is a model of sorts for American cities: a slum with few government services run by religious and/or paramilitary organizations.

Meanwhile, a short distance away, the wealthy enclave has erected walls or barriers (visible or not, they're there) and hired a private militia (Hi, I'm your friendly Blackwater "Neighborhood Watch" guy) to keep the rabble and stench safely at a distance.

This is nothing new, of course; the wretched, overcrowded Paris slums of 1877 so accurately described by Emile Zola in L'Assommoir

did not adjoin the ritzy part of town, to be sure. And the "Green Zone" enclave for the well-heeled is standard urban planning in Third World mega-cities. (See Planet of Slums

by Mike Davis for more on mega-slums.)

It was a lot more fun being a politician back in the good old days before 2008 when revenues were rising and you could bring smiles to faces with increases in benefits, add more people to the payroll and provide more services to citizens; the future won't be quite so joyful for those tasked with balancing an impossibly skewed and broken budget.

As always, everyone won't believe that the gravy train is now a smoking pile of rubble by the tracks; there has to be more money somewhere, just go get it! But there won't be any more money, they'll be less, and less next year and even less the year after that, for quite some time.

Trash pickup will slip in frequency, and perhaps angry strikes will disrupt service entirely. Taxpayers will have their own well of anger, for many of them will be jobless or benefitless or living off a part-time job or reduced hours. They will not be in any mood to sympathize with angry public employees. There will be enough anger and frustration for everyone to get a nice big helping, but not enough money or solutions except the hard kind that nobody wants to hear.

As I have noted here before, the foundation of local taxes is small business, and small business is exactly who can't afford the taxes already being levied. They will fold up and leave empty warehouses and retail spaces rather than lose money. Even the big chains are closing stores by the dozens--in my neighborhood, Ross, Sees Candy and Barnes and Noble, to name but a few.

If anyone working for a city or agency thinks this trend will reverse any day now, they will be very disappointed by the gathering momentum of businesses shuttering and tax revenues dropping year after year after year. "You can't get blood from a turnip," the old saying goes, and the citizen without a job is a turnip, and a small business losing money is a turnip, too. Even people with jobs but no more commissions or benefits are turnips. They have enough money for rent and food and gas or subway fare, and nothing else.

The city can pick up the sales tax on gasoline and a few non-food items at the supermarket, and a few bucks' tax on cellphone charges, but that's all it will get. The more the city charges for access to pools and parks and services which were once free to taxpayers, the less such services will be used. After all, You can't get blood from a turnip.

We Will All be Better Off with Falling House Prices
(Paul Tolnai, June 18, 2008)

New commentaries on diet/lifestyle and Something Amiss added:

Thank you, William S. ($15), for your extremely generous fourth donation to this site. I am greatly honored by your support and readership.