Many observers focus on the economic causes of the widening wealth inequality, but the divide appears to be both cultural and financial.

To say there are haves and have-nots and two major political camps does not distinguish this era from any other. But despite this surface similarity to previous eras, there is a palpable zeitgeist that the nation is bifurcating into two camps which no longer overlap or communicate using the same cultural signifiers and symbology.

There is also a growing awareness that the divide between very wealthy and the middle income households has widened into an enormous canyon of inequality: 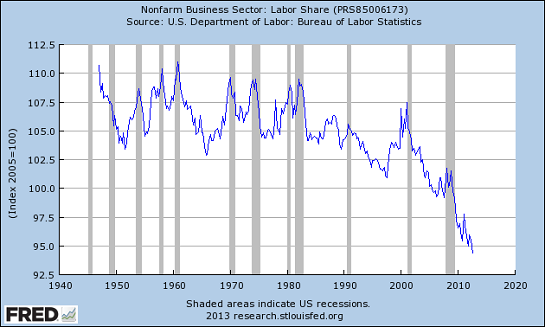 Politically, I have long commented on the rising political divide not between the "two sides of the same coin" parties but between those who depend on and support the Savior State and those who pay the majority of taxes that fund the Savior State. This has created the divide feared by the Founding Fathers, The Tyranny of the Majority.

A neofeudal Elite rules the roost but the Savior State buys the complicity of the lower classes with entitlements and social programs.

Tyranny of the Majority, Corporate Welfare and Complicity (April 9, 2010)

According to demographer Joel Kotkin, California has become a two-and-a-half-class society, with a thin slice of "entrenched incumbents" on top (the "half class"), a dwindling middle class of public employees and private-sector professionals/technocrats, and an expanding permanent welfare class: about 40% of Californians don't pay any income tax and a quarter are on the Federal Medicaid program.

I would break it down somewhat differently, into a three-and-a-half class society: the "entrenched incumbents" on top (the "half class"), the high-earners who pay most of the taxes (the first class), the working poor who pay Social Security payroll taxes and sales taxes (the second class), and State dependents who pay nothing (the third class).

This class structure has political ramifications. In effect, those paying most of the tax are in a pressure cooker: the lid is sealed by the "entrenched incumbents" on top, and the fire beneath is the Central State's insatiable need for more tax revenues to support the entrenched incumbents and its growing army of dependents.

This leads to a systemic question: Is Democracy Possible in a Corrupt Society? (November 12, 2012)

We can phrase the question as a corollary: in honor of my book Why Things Are Falling Apart and What We Can Do About It (print) (Kindle), let's call it WTAFA Corollary #1:

In other words, if the citizenry cannot dislodge a parasitic, predatory financial Aristocracy via elections, then "democracy" is merely a public-relations facade, a simulacra designed to create the illusion that the citizenry "have a voice" when in fact they are debt-serfs in a neofeudal State.

Many observers focus on the economic causes of the widening wealth inequality, but the divide appears to be both cultural and financial. Author Charles Murray describes a cultural divide that informs the political and economic divides that are obvious to all in his book Coming Apart: The State of White America, 1960-2010.

Murray has collected evidence that Caucasian America has bifurcated into cultural/social haves and have-nots: the haves are married, have college degrees, avoid military service, are less likely to attend religious services, and have little contact with those outside their own upper-middle class.

The have-nots are divorced/single parents, less educated, are more likely to serve in the military and attend church, and earn much less than the haves.

The social glue that binds the nation includes these core values: the Constitution (and particularly the Bill of Rights), that no one is above the law, and upward mobility, that anyone born without privilege or wealth can attain status, wealth and power by exerting their own will and initiative.

What Murray suggests is not that upward social mobility has ceased, but that it's become more difficult for the have-nots to join the haves, not necessarily for lack of opportunity but for the values-based reasons he describes.

In my analysis, the cultural upper class has the income and connections to build abundant human and social capital, while the lower class has neither the values-tools, income or connections to assemble these critical building blocks of wealth.

This sociological/economic reality is ideologically inconvenient on a number of fronts, largely because it ties "personal choice" issues such as marriage to what appears to many to be a strictly economic issue.

The resentment toward the privileged class that is bubbling up suggests people don't need to read a lengthy sociological study to sense the divide is widening. The Mobile Web technology boom in San Francisco has sent rents and resentments to new heights: In defense of San Francisco's techies (S.F. Chronicle)

A growing number of San Franciscans are fed up, not just with startups, but with techies in general. With their apps and (company) buses, their gourmet coffee and skinny jeans, their venture capital wishes and IPO dreams. They're tired of watching rents soar, friends forced to relocate and beloved neighborhoods drained of diversity.

I understand the frustration, but wonder: Are we embracing a soft xenophobia applied to a sector rather than a race, to some cohesive elite tech class that doesn't exist outside of our own minds?

The buses roll up to San Franciscos bus stops in the morning and evening, but they are unmarked, or nearly so, and not for the public. They have no signs or have discreet acronyms on the front windshield, and because they also have no rear doors they ingest and disgorge their passengers slowly, while the brightly lit funky orange public buses wait behind them. The luxury coach passengers ride for free and many take out their laptops and begin their work day on board; there is of course wifi. Most of them are gleaming white, with dark-tinted windows, like limousines, and some days I think of them as the spaceships on which our alien overlords have landed to rule over us.

Sometimes the Google Bus just seems like one face of Janus-headed capitalism; it contains the people too valuable even to use public transport or drive themselves. In the same spaces wander homeless people undeserving of private space, or the minimum comfort and security; right by the Google bus stop on Cesar Chavez Street immigrant men from Latin America stand waiting for employers in the building trade to scoop them up, or to be arrested and deported by the government. Both sides of the divide are bleak, and the middle way is hard to find.

I think Solnit's point touches on two key dynamics: the shrinking middle, and the casual privilege of those with earning power and the resentment of the increasingly powerless.

This is hardly unique to America: Priced out of Paris: global cities pricing out the upper-middle class.

Is this the result of capitalism? The question is an active one, for example Capitalism and Inequality: What the Right and the Left Get Wrong (Foreign Affairs, March/April 2013; the article is behind their paywall; check out a copy at your local library).

While capitalism certainly rewards the most productive (in the context of whatever incentives are in place) and creatively destroys what is no longer productive/profitable, we have to differentiate between classical open-market capitalism and the state-cartel (crony) version that is passed off as capitalism for PR purposes.

Then there are the economic forces that are sweeping aside the old structures not just in America but in China, Europe and elsewhere:

1. Automation, software and robotics are eliminating human labor on a vast scale.

2. Financialization has given those with capital and access to financier expertise ways to skim great wealth from the system without creating any value whatsoever.

These are dynamics that don't track neat ideological lines, nor do they lend themselves to tidy, simplistic solutions. Before we propose fixes, perhaps we need to do more work on understanding the many interconnected feedback loops in the widening bifurcation of the nation.


NOTE: gifts/contributions are acknowledged in the order received. Your name and email remain confidential and will not be given to any other individual, company or agency.
Thank you, David E. ($5), for your very generous contribution to this site -- I am greatly honored by your support and readership.