Can We See a Bubble If We're Inside the Bubble?

We want this time to be different so badly, we can almost taste it.

If you visit San Francisco, you will find it difficult to walk more than a few blocks in central S.F. without encountering a major construction project. It seems that every decrepit low-rise building in the city has been razed and is being replaced with a gleaming new residential tower.

Parking lots have been ripped up and are now sprouting condos and luxury rental flats.

This boom is not overly surprising, given the centrality of San Francisco and the S.F. Bay Area in the Hipster-Techie Mental Map which I have sketched here for those who may still suffer from delusions that Washington D.C. and New York matter--(hint: they don't.) 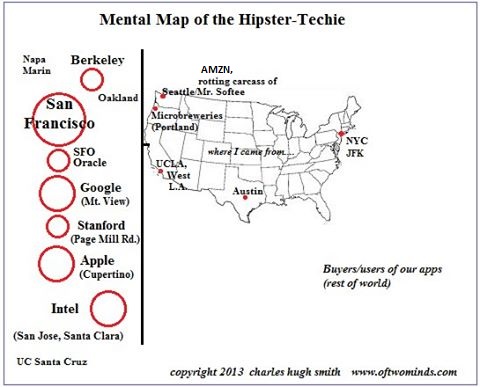 The influx of mobile/software tech into the S.F. Bay Area has triggered not just a boom in tech but in all the service sectors that cater to well-paid techies. This mass of new people has created traffic jams that last virtually all day and evening, and overloaded the area's BART transit rail system such that trains at 11 pm are as jammed as any during rush hour.

This phenomenal building boom is truly something to behold, as it has spread from S.F. to the East Bay as workers priced out of S.F. move east across the Bay, driving up rents to near-S.F. levels.

Yes, rents and home prices are starting to soften, but this hasn't changed the general view that this is only a moderation of a long-term uptrend with no end in sight.

This is of course a modern analog of the Gold Rush in the 1850s, and the previous tech/building boom in the late 1990s: an enormous influx of income drives a building boom and a mass influx of treasure-seekers, entrepreneurs, dreamers and those hoping to land a good-paying job in Boomland.

The same phenomenon has been visible in the Oil Patch states every time oil/gas skyrocket in price.

We know how every boom ends--in an equally violent bust. Yet in the euphoria of the boom, it's easy to think this one will last longer than the others.

I distinctly recall the mass excitement of COMDEX in 1999, the big computer-tech trade show in Las Vegas. The city was packed, the convention centers were packed, and an enormous banner announcing the then revolutionary slogan "the network is the computer--Sun Microsystems" welcomed the faithful.

I saw Bluetooth demonstrated for the first time in that show (at a Motorola booth), and dozens of other consumer technologies that never quite caught on--kits to turn your PC into a TV, etc.

Now we see the same euphoria in the FAANG stocks, Big Data, A.I., crypto-currency Initial Coin Offerings (ICOs) and so on.

A year later the bubble had burst, and a decade later Sun Micro had lost its edge and would end its glorious run in the ignominy of being sold to Oracle for pennies on the dollar.

Rents in San Francisco are now so obscene that there is even a parody in which Hitler tries to rent a flat in S.F.

Across the Bay in Oakland, new relatively large 1-bedroom flats with Bay views are asking $3,300 a month. The same flat in S.F. would fetch $4,000 or more per month. Techies working for free on a buddy's start-up have famously rented the space beside the washing machine in a laundry room for $400 a month. 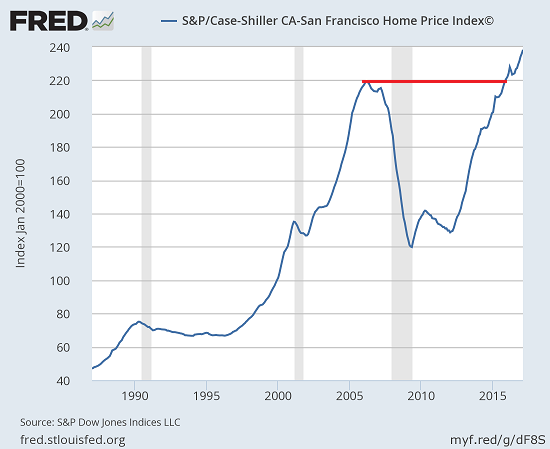 How many average workers can afford to pay $40,000 a year in rent? After taxes, even techies earning $80,000/year would have little to show for their labor once they paid $40K after $20K in taxes and deductions have been subtracted from their annual wage.

The current Gold Rush will collapse, and as the newly fired marginalized workers pack up and leave, nobody will be renting the flats for $4,000/month. The owners will try reducing the rents to $3,000/month, and with no takers, they will go bust and the gleaming towers will be auctioned off. Eventually rents will decline to what people can actually afford.

This process will take a few years, as owners are reluctant to accept secular declines in rent and the resulting insolvency. Restaurants and other secondary businesses that arose to serve the techies will hang on, paying insane rents, for a few months and then give up losing money and close.

The bubbles in Seattle and Portland that so many view as permanent features of their rising wealth will also succumb to gravity.

We naturally cling to the euphoria and glory of a boom; they generate such hope and positive emotions. The bust is no fun at all, a slow cascade of layoffs, insolvencies, moves to cheaper and far less exciting locales, busted dreams and all the mourning that accompanies the shattering of dreams and hopes.

Knowing all this doesn't prepare us for the bust, any more than the initial signs of a boom prepared us for the bubble. We want this time to be different so badly, we can almost taste it. But this time is only different on the margins; the flavor of the bust remains the taste of ashes.