Debt Has No Consequences? Color Me Skeptical

The entire status quo is based on the delusion that rapidly rising debt will never generate any negative consequences.

Here's a chart of America's national debt, extended a mere dozen years into the future: the current $20 trillion in debt will double to $40 trillion, and that assumes 1) trillions of dollars in private and local government pensions don't implode and have to be bailed out by the federal government, a bail-out that will have to be paid by borrowing more money, 2) a recession doesn't slash federal tax revenues, 3) Universal Basic Income (UBI) doesn't become policy, adding $1+ trillion in additional borrowing annually--and so on. 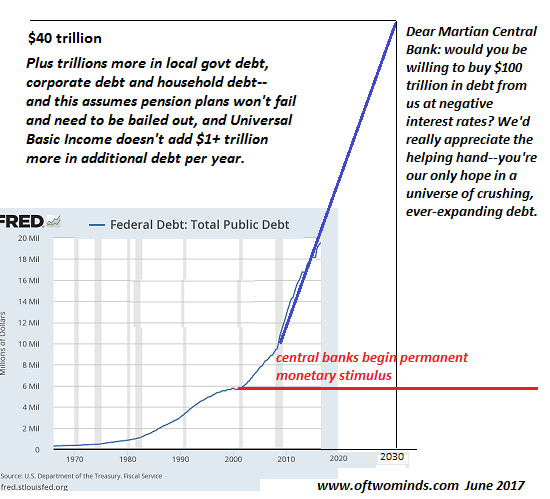 Color me skeptical that doubling the debt in 12 years won't have any negative consequences. Let's start by noting that federal debt is only the tip of America's total debt load, which is rising fast in all sectors: federal, state/county/city, corporate and household.

The consensus is that all this debt will have no negative consequences because 1) interest rates will remain near-zero forever and 2) it's all "investment", right? Actually, no; the vast majority of this debt is consumption, not investment, or even worse, it simply services existing debt or funds speculative gambling (stock buybacks, etc.)

Recall that every debt is somebody's asset. Debt jubilees sound great to debtors, but not so appealing to insurance companies, pension funds, mutual funds, etc. that own the debt and rely on the income from that debt to pay pensioners their pensions, settle insurance claims, etc.

A meaningful debt jubilee would wipe out the pension and insurance sectors, not to mention trillions in IRA and 401K accounts invested in various debt instruments.

Some well-meaning observers reckon we could manage a mini-jubilee by giving every household $100,000 that would have to be spent paying down debt. Those without debt could keep the "free money" and use it as they wish.

This would instantly require $11 trillion in new federal debt. There is no such thing as "free money" in our system: money is borrowed into existence. All this would do is transfer some private debt to the public sector, i.e. to future taxpayers. How is that fair?

You see the rub here: wiping out debt also wipes out the very assets and income streams that keep our economy functioning in the current status quo. How about those super-low interest rates? What's the interest bill at 2.5% interest on $40 trillion. A cool $1 trillion a year.

The federal government collects roughly $3 trillion in tax revenues annually. $1 trillion in interest payments would soak up a third of all tax revenues, requiring massive, politically impossible cuts in spending, or even more borrowing.

As for the fantasy that tax revenues will climb as steeply as debt--color me skeptical, as wages and corporate profits are both stagnating.

The entire status quo is based on the delusion that rapidly rising debt will never generate any negative consequences. Color me skeptical of that working out in the real world.