After last week's dramatic bailout of Bear Stearns, the world is waiting for the proverbial "next shoe to drop" in the global financial crisis. Too bad the crisis isn't a two-legged creature: it's a centipede. 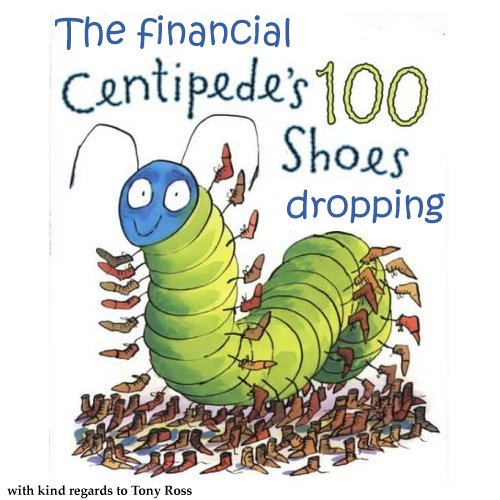 With a respectful tip of the hat to Tony Ross's wonderful children's tale, Centipede's One Hundred Shoes

let's start a list of some of the next 99 shoes to drop. In no particular order:

1. Recent new home buyers sue builders and lenders over bogus inflated appraisals. KB Home sued over appraisals. It seems KB Homes used a house in the same subdivision which it claimed was sold for $475K when the county records indicate it was sold to the new home buyer for $407K. Oops! Our bad. Now go away. Not so fast, KB Homes and Countrywide.

4. Buyers of mortgage-backed securities suing investment banks for misrepresenting of the assets' risks.

6. Plaintiffs' lawyers seeking whatever deep pockets remain amidst the carnage (i.e. "grab-bag of lawsuits against everyone involved")

7. Non-U.S. banks getting judgments against U.S. investment banks and ratings agencies in overseas courts which then put the entire U.S. judicial system in an awkward light. Everyone knows the mortgage-backed securities were fraudulent; so a British or German judgment will be rejected despite the fact the U.S. entity has branches in the EU?

8. Food riots increase in the Mideast, Egypt, China, the Philipines, etc. as food prices continue to skyrocket. Rice up 60%. Hmm. How many people depend on rice for their survival?

12. As oil plummets, Venezuela, Iran, Nigeria, et. al. suffer financial and social turmoil as their budgets are slashed. Oil-export states which spend much of their petroleum revenues on social welfare programs to placate their populace will be in big trouble.

14. Oil exporting states' own consumption, being heavily subsidized, doesn't drop as global demand drops. This further squeezes the exporters: as more of their oil is consumed by their citizenry for peanuts/barrel, there is even less to sell overseas.

15. Consumer spending will slow further and faster than analysts expect. Consumers borrowed $3 trillion above long-term trendline spending 2000-2007. (source: this week's BusinessWeek.) "Tapped out" doesn't quite do justice to what lies ahead.

18. The world realizes the Fed just burned its last belt of heavy ammo, and the hordes of financial banshees keep coming. Sure, the Fed can lower interest rates again but the mortgage rates don't drop. It can 'save" another tottering financial institution but trust has been destroyed between financial institutions.

19. The home ATM machine is not only broken, it's hauled to the dump. Let's lower the Fed rate to 1%--will that magically increase the value of homes in an environment of tight lending standards, risk aversion and massive inventories of unsold houses and condos? No. So take the home ATM (mortgage equity extraction) machine to the dump, or sell it for scrap.

20. A counterparty to a bunch of toxic derivatives goes under, lighting a chain of derivative failures which launches the "liquidity crisis" to a new level. Fed's rescue halted a derivatives Chernobyl (for now) (link courtesy of U. Doran)

21. Massive reductions in real estate valuations gut local government property tax revenues. With less money to spend, local governments have no choice but to lay off hundreds, then thousands, of employees.

22. Non-U.S. investors give up on the dollar and long-term Treasuries, buy only 90-day T-Bills. The entire "bailout" exercise and "tax rebate" is essentially funded by non-U.S. capital; as that capital dries up/goes away in disgust, America's borrowing binge dries up too--even at the Federal level.

23. Non-U.S. investors who came to U.S. financial institutions' rescue with fresh capital suffer staggering losses in a few months. Twice burned--by the dropping dollar and now by the institutions such as Citi and Bear which misrepresented their risks--the non-U.S. Posse stops coming to the rescue of defaulting U.S. institutions.

25. A major U.S. company reports a dramatic quarterly reduction in profits. With U.S. stock markets barely off their all-time highs, this "surprise" sends the markets reeling.

26. Subprime crisis spreads to all mortgage classes. As this chart shows, there are plenty of other mortage classes ripe for defaults/late payments/foreclosures: not just ARMs but balloon payment loans, FHA, VA, properties with second and third mortgages, etc.:

27. Wal-Mart and the Chinese government join in a class-action lawsuit against American consumers, demanding they increase their spending despite the recession. Just joking; as the saying goes, "you can't get blood out of a turnip."

These are just a few of the "other shoes waiting to drop"--I'm sure you can add a dozen or two off the top of your head.

Thank you, Eric A. ($20), for your generous financial support of this humble site, and most especially for your wise words of encouragement. I am greatly honored by your contributions and readership. All contributors are listed below in acknowledgement of my gratitude.