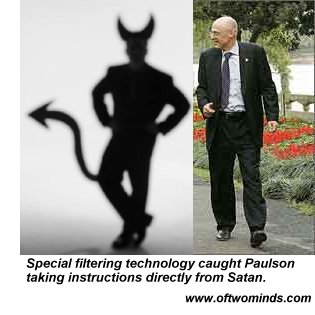 I was preparing to write a nuanced, subtle analysis of the U.S. financial system's regulatory failures and the inadequacy of Treasury Secretary Henry Paulson's proposals to "fix" the system (double entendre intended) when I came across a document which proves beyond a shadow of doubt that Hank Paulson is working directly for the Devil.

I know this is a shocking revelation, and unfortunately I can't scan the incriminating document, as it was written in goat's blood and only becomes visible for extremely short periods when sluiced with a secret Dark Arts formula (eye of a newt, etc.)

Despite the difficulties, I was able to transcribe the text, which is reprinted below just as it was written.

To provide the proper context for understanding the fiendish cleverness of Paulson's "reform" proposals, let's turn to a cogent quote from Gullivers Travels by that incomparable satirist Jonathan Swift, courtesy of frequent contributor U. Doran:

"They look upon fraud as a greater crime than theft, and therefore seldom fail to punish it with death; for they allege, that care and vigilance, with a very common understanding, may preserve a mans goods from thieves, but honesty has no defence against superior cunning; and, since it is necessary that there should be a perpetual intercourse of buying and selling, and dealing upon credit, where fraud is permitted and connived at, or has no law to punish it, the honest dealer is always undone, and the knave gets the advantage."

Here's the letter from the Devil to Paulson:

You have outdone yourself once again, my loyal servant, with these fraudulent, deliciously deceptive proposals to reform the utterly corrupt financial system you exploited so profitably as head of Goldman Sachs.

My plans for the destruction of the United States of America have been going along rather swimmingly until we rushed things a bit with Bear Stearns--ah, the wondrous power of pure, unmitigated greed! It remains my favorite tool--and calls for reform were suddenly everywhere.

The rules which would have undone us were simple indeed, as you know all too well:

As you know, Hank, transparency, mark-to-market and strictly enforced regulations of all banks, broker-dealers and financial institutions would deal a death blow to my plans to destroy the U.S. via destruction of its financial system. Having sold your soul to me for the glory and riches you received at Goldman Sachs, you had to comply with my orders to destroy any such useful regulations with cunning "fixes" of your own.

Though I counted on your native feral survival instincts, I did not expect a plan of such evil genius. Imagine how foolish and naive humans must be to accept your "fix"! My mind boggles at the ease with which you have conned the gullible gallery of idiots in Congress and the mainstream media:

1. you diminish the powers of the Federal agencies and favor the "shadow government" Federal Reserve, which is not even a government agency but a private institution
2. Instead of proposing transparency, you are adding another layer of secrecy in what the Fed can investigate and do to "fix" future problems
3. Enable more "self-regulation" (hahahaha, I can't stop laughing at this one! You really are a comedian!)

I am still amused that the American populace hasn't noticed that you, Master of the Dark Arts at Goldman Sachs, have been duly appointed as the wolf assigned to guard the sheep. Now you have suggested opening the rusty wire fencing and lighting the opening so your brethren can more easily slip in and slaughter as many sheep as they wish--and the American sheep sit there mesmerized by my other crowning achievement, the TV, blithely accepted that the most voracious, cleverest wolf is now their "guardian." Never in my wildest imaginations did I hope for such gross stupidity, ignorance and naivite.

Keep up the fine work--

Your Lord and Master,

Lest you think I exaggerate: please read the following excerpts and commentaries:

Government interventions always bring disruptions, but when Washington meddles in financial markets, the potential for the sort of distortion that obscures proper incentives is especially large, due to our markets' complexities. Even Robert Rubin, the Citigroup executive and former Treasury secretary, has admitted he had never heard of a type of contract responsible for major problems at Citi.

Capitalism isn't supposed to work like this, and before the advent of modern finance, it usually didn't. Market values fluctuate, but -- in the absence of fraud -- billion-dollar companies do not evaporate. Yet it's worth noting that Lehman Brothers, stock also fell by half and then recovered within a 24-hour span. Once, investors could get a read on financial firms' assets and risks from their balance sheets; those days are history.

Firms now do much of their business off the balance sheet. The swashbuckling Bear Stearns was a party to $2.5 trillion -- no typo -- of a derivative instrument known as a credit default swap. Such swaps are off-the-books agreements with third parties to exchange sums of cash according to a motley assortment of other credit indicators. In truth, no outsider could understand what Bear (or Citi, or Lehman) was committed to. The thought that Bear's counterparties (the firms on the other side of that $2.5 trillion) would call in their chits -- and then cancel their trades with Lehman, perhaps with Merrill Lynch and so forth -- sent Wall Street into panic mode. Had Bear collapsed, or so asserted a veteran employee, "it would have been the end: pandemonium and global meltdown."

Harun also sent along this story,

and made these comments:

The Fed doesn't want another BSC because there is probably no entity with the capital to buy another failed institution. How many bullets does the Fed have left?

I find it somewhat ironic that Paulson, fresh from years of financial alchemy, wants to expand the powers of the banking cartel. It is as if no one remembers that by default he played a part and therefore is partly responsible for what is happening today.

But it seems (as much as I don't like the banking cartel having more power) that Paulson and the Fed realized that WS firms do create credit money (fiduciary media) and left unchecked as it has been leaves the system vulnerable to serious dislocations.

However, if the Fed can't or won't recognize "bubbles" and act, all of this will be academic.

We should be wary of the Fed having sprawling powers. It potentially means that no big institution will be allowed to fail, meaning this could easily segue into normalizing the socialization of losses. We must remember that this is a private organization, its officials are not publicly elected. It is not transparent or accountable like the SEC or CFTC. And without sweeping reforms in regards to transparency and accountability I would vigorously resist the expansion of the Feds powers.

Back in earlier times in America, before the Central Bankers took over, there were lots of financial institutions in the country. Most were fiercely independent and they played a key role in the development of the nation. That was a time when the White House was able to dictate to the banks and financial interests rather than today's mirror/reversed situation where bankers largely tell the government what to do.

So the Banker's Revolution begins Monday and the choice is simple:

We can take the easy way which means more government and a furtherance of the recent price fixing in markets...I'm sorry; maintenance of market stability. Come to the great casino, no losers here. Good times, but more regulations, less freedom of choice and a bigger and meaner Big Brother. Did someone over there lose? Well, you just chip in and pay for their losses. The house will keep a share for its hard work, of course.

Or, we can take the hard path and limit bankers, contain government, hold greedy speculators accountable, and let the markets clean themselves. And if we make bad choices, we will live with those. Hard times for a while, but 30% interest rates can be beaten back to 8%, states can legislate usury, and the wealthy elite 'ruling class' can be sent packing: Those who would export our jobs, leave our borders unfenced, and abdicate their responsibilities to preserve sound money, are welcome to leave.

So give it some thought this weekend. Which side will you choose? Soft and Easy but totally Ruled, or Hard and Thrifty - yet FREE?

U. Doran recommended this from Peter Schiff: Bail me out Bennie (Financial Sense)

and this history of The Federal Reserve System

Thank you, readers, for the recommendations and thank you Harun for the comments and Michael for the haiku. I for one feel better knowing about Hank and Lucifer. Now who appointed Hank? Hmm....

Thank you, William M. ($50), for your extremely generous contribution to this humble site. I am greatly honored by your support and readership. All contributors are listed below in acknowledgement of my gratitude.