Astute reader Trey S. recently posed an important question which is of pressing concern to all of us:

Not sure if you have an insights, but I've been trying to look at non-bubble markets like Raleigh, North Carolina to see if the housing crash will hit all of America or just bubble markets. In November, home sales in downtown Raleigh - a prime gentrifying neighborhood - just stopped. I mean they hit a wall. I've been waiting for spring to see if it's a seasonal slow down or if the bubble effect is spreading.

My dad owns a construction company in Charlotte, another area that is 'strong,' but he says construction activity has halted. On a typical day, his phone would ring 80-100 times; yesterday it rang twice. This seems counter to what analysts describe happening in North Carolina.

In my mind this is the big question: If housing problems are truly contained to bubble cities, we'll be all right as a nation. But if Austin and Raleigh crash then we really are headed to the Great Depression, part II.

Since the Fed stopped the cycle in 2001-2003 by dropping rates to essentially zero, then the U.S. has not had a healthy business-cycle contraction since a brief recession in 1991. Now that credit has been so thoroughly abused, the contraction will feed on itself, as suggested by the following diagram. 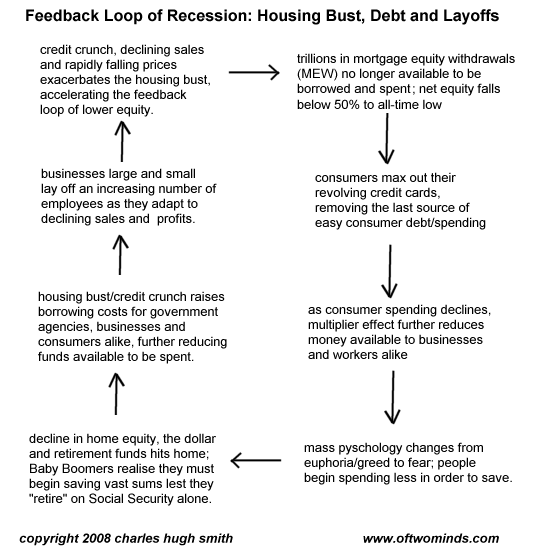 The most important driver of easy-to-access and easy-to-spend cash has been the home. As these quotes reveal, home equity extraction has totalled trillions of dollars in the housing bubble: a staggering $863 billion was withdrawn in a mere three months at the top of the mania in 2005.

I have been unable to locate any reliable statistics on whether the vast majority of this was extracted in bubble-mad cities, but it seems the entire nation indulged in massive equity withdrawal.

As recently as the first quarter of 2007, American homeowners pulled out $450 billion from their homes and presumably blew most of it (there really is no way to know, but borrowers' claims to have "invested" 40% of the proceeds are suspect, to say the least.)

In the most recent quarter (Q4 2007), borrowing fell dramatically to $145 billion for the three month period. In other words: the home ATM is running out of cash.

In the first quarter, "home equity extraction: net of fees fell 8% to $449.6 billion at a seasonally adjusted annual rate from the fourth quarter, the lowest since the fourth quarter of 2003 well below the peak of $863.7 billion in the third quarter of 2005. The data are prepared by Fed economist James Kennedy according to a model he built with Mr. Greenspan; they aren’t from an official Fed publication.

Based on the Q4 GDP data from the BEA, my advance estimate for Mortgage Equity Withdrawal (MEW) is approximately $145 Billion for Q4 (just under $600 billion on a SAAR- seasonally adjusted annual rate) or 5.6% of Disposable Personal Income (DPI).

Given this massive extraction of equity, it is not surprising that U.S. homeowner equity has fallen to an all-time post-world War II low:

Homeowner equity falls below 50%. What's really sobering is that almost 40% of all residential units in the U.S. are not mortgaged, i.e. are "feee and clear." If we subtract this equity, then the remaining 60% of houses and condos obviously retain far less than 50% equity. (Statistical links can be found in Can 4% of Homeowners Sink the Entire Market? (February 21, 2007)

When credit cards put you in jeopardy

Consumers have racked up more than $2.2 trillion in purchases and cash advances on major credit cards in just the last year. And it's become a habit for them to spend more than they have. The overall credit card debt grew by 315 percent from 1989 to 2006, according to public policy research firm Demos.

Harun also sent in this link to a Jim Juback video suggesting that the housing bust is by default also a retirement bust:

We all know the housing bust has created an economic slowdown, a home-building depression and a credit crunch. But no one is talking about the retirement crisis, says MSN Money’s Jim Jubak -- even though soon-to-retire boomers have just lost a whopping $2 trillion in home equity.

Additionally, as Harun noted in a recent email, the Pareto Principle won't go away:

According to Paulson only 2% of borrowers are in trouble (therefore everything should be okay). Then why all the turmoil? Why all the bailout talk? Why is Bernanke in a panic?

The only answer that makes sense but everyone is overlooking is, leverage. Mortgages are the underpinning of hundreds of trillions in derivatives. A small percentage of defaults is enough to cause massive de-leveraging. v If 2% is causing all this trouble, I hate to see what happens at 4% (64/4 rule).

It seems the subprime mortgage default rate is already well in excess of 4%:

The Pareto Principle has been covered a number of times here:

The Great Fall: How Suburbs De-gentrify to Ghettos (November 20, 2007)

Here is a New York Times story on the decline in consumer spending:

The Buck Has Stopped :

BEN S. BERNANKE, the Federal Reserve chairman, told Congress last week that fighting off a possible recession in the United States was Job 1 for his crew. But a consumer-led recession has already begun, according to a new index that reflects how much money Americans can actually spend right now.

The new indicator comes courtesy of Charles Biderman, the founder and chief executive of TrimTabs Investment Research, a proprietary research firm in Santa Rosa, Calif. “The big picture is: the amount of money people have to spend, which includes money on real estate transactions, is plummeting, and it started to break down in October,” he said.

And in the "unintended but disasterous consequences" column, chalk up hapless governmental agencies completely unrelated to the housing bubble getting nailed for much higher borrowing costs:

So what happens when people stop eating out as often, stop buying carpeting and furniture in vast quanities, cut back on Starbucks lattes, and on and on? Sales slow, and businesses lay off employees. Those newly unemployed have a lot less money to spend, and so consumer spending erodes further in a feedback loop with no apparent end.

Apologists--even otherwise smart people--suggest that consumer spending might drop $300 billion or so--no big deal in a $14 trillion economy. I beg to differ.

First off, let's not forget the multiplier effect. Your $40 spent in a restaurant goes to the establishment's landlord, who spends some of that money, to food distributors, to employees, and so on, all of whom spend money which ends up in other workers' pockets. So the economy doesn't just "lose" your $40 when you don't spend it--everyone in the food chain down the line also loses a little. Cumulatively, that adds up to 3 times the initial amount spent/not spent.

Second, consider the enormous sums of mortgage equity and credit card debt which is no longer available to be borrowed/spent. We can debate the actual number which was borrowed and spent over the past few years, but let's just guesstimate it was $5 trillion. Considering that $863 billion was borrowed in only three months of 2005 (an annual rate of $3.4 trillion), and $2 trillion was added to revolving credit cards in just 2007, this number seems very conservative. In other words, the actual amount would seem to approach $10 trillion based on the statistics given above:
MEW $3.4 trillion in 2005
MEW $2 trillion in 2006
MEW $600 billion in 2007
Credit card cash withdrawals and new unpaid balances: $4 trillion

We could also add in auto loans and other debt, but let's keep it rounded to trillions.

Next thing you know, the same apologists will be hyping the wonderful "fact" that 85% of the populace "still have a job." Uh, isn't that a warm and fuzzy way of saying the unemployment rate is 15%--and climbing?


Readers Journal has been updated! As always, readers have shared incisive commentaries on key issues such as pharmaceutical ads and the demise of house flippers/speculators: There's also a new thought-provoking essay by contributor Chuck D. and a new short poem by Verona, My Second Self.
Special bonus update: Recommended Books/Films has been updated with dozens of new books and films. Scroll all the way to the right to see our exciting new film categories, "French Tough-Guy Films" and "Guy Films (no Merchant-Ivory!)". Great fun. If you think all French movies are romantic triangles or cuddly movies like "Amelie," prepare to be blown away.
NOTE: contributions are humbly acknowledged in the order received. Your name and email remain confidential and will not be given to any other individual, company or agency.

Thank you, William S. ($15), for your sustaining, amazingly generous support of this humble site. I am greatly honored by your contributions and readership.