The current de facto policy of inflating asset bubbles to spark a "wealth effect" is no substitute for policies that make it less burdensome to start new enterprises and hire employees.

The Status Quo is shameless when it comes to hyping the recovery by whatever metric is most positive. Recently, that has been the stock market, but if GDP rises significantly (and recall GDP increases if the government borrows and blows money), then that number is duly trotted out by politicos and Mainstream Media toadies.

If we scrape away this ceaseless perception management, we find that legitimate broadbased prosperity is always based on rising employment and increased purchasing power of wages. The phantom wealth that is conjured by asset bubbles vanishes when the bubbles inevitably pop, leaving all those who borrowed against their ephemeral bubble wealth hapless debt-serfs.

Since very few households own enough productive assets (i.e. financial assets above and beyond the family home equity) to replace earned income (i.e. a job) with unearned income, rising asset yields and prices do little to improve household wealth or income.

For context, the U.S. has about 307 million residents and about 110 million households. Roughly 112 million people have full-time jobs and about 38 million are self-employed or have part-time jobs.

Recall that thanks to the Federal Reserve's zero-interest rate policy (ZIRP), $1 million invested in short-term Treasury bonds earns around $10,000 a year in interest--less than a job paying minimum wage. Owning $1 million in stocks that pay a 2.5% dividend yields $25,000 a year in income, considerably less than the median wage of around $35,000. So even $1 million isn't necessarily generating enough income to replace earned income (wages).

If prosperity ultimately depends on employment and earned income (wages), how are we doing as a nation? Unfortunately, the answer is "terrible." As a percentage of the population, full-time employment is down. Only 36% of the population has a full-time job.(Charts 1 & 3 were reprinted by permission from mdbriefing.com; charts 2,4 & 5 are courtesy of frequent contributor B.C.): 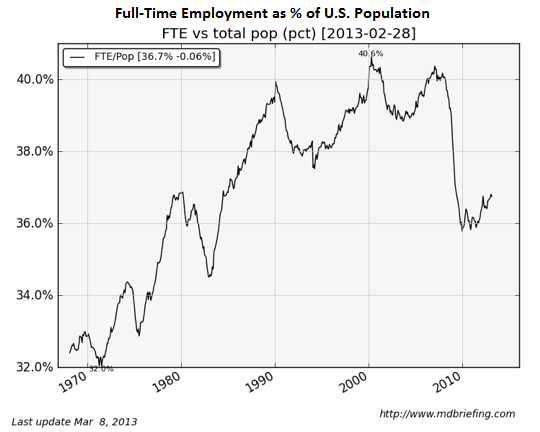 It is also down on a per capita (per person) basis: 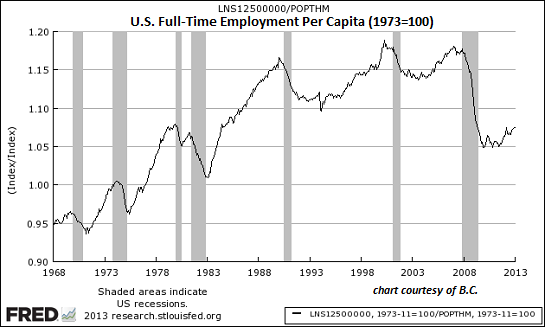 Meanwhile, an increasing percentage of jobs are part-time. When the media reports that the number of those employed has gone up, note they never break down how many of those new jobs were full-time and part-time. 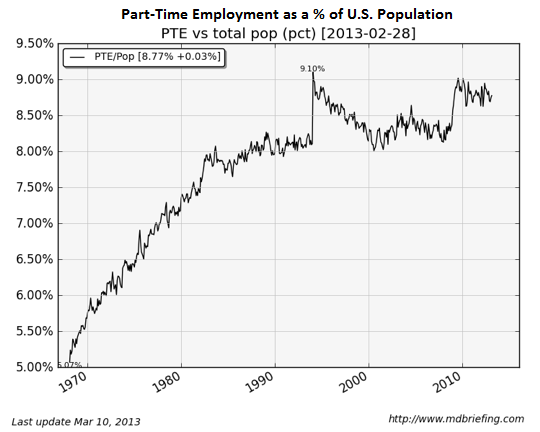 Total civilian employment is also down: 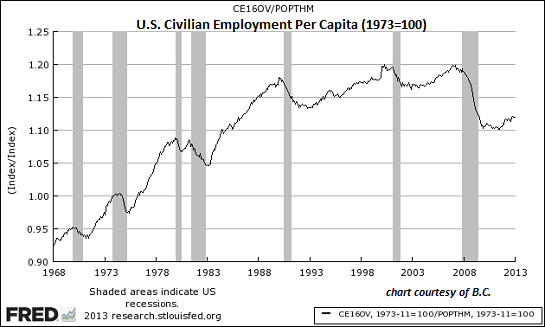 If we adjust GDP for the growth of M2 money supply and population, we find the broadest measure of the U.S. economy is tanking. 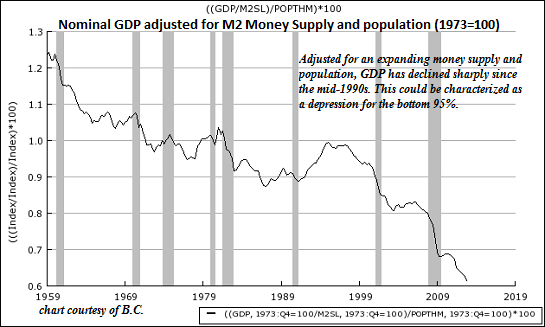 As for wages, I have often reprinted this chart by Doug Short: adjusted for official inflation, real wages are down by 7% - 8%.

(Doug recently reported on net worth, which has nominally matched previous levels but adjusted for official inflation is down 12% from its peak: Household Net Worth: The "Real" Story.)

Adjusted for inflation, the median income for the lower 90% of wage earners (138 million people) has been flat since 1970--forty years. Only the top 10% (14 million people) actually gained income, and only the top 5% gained significantly (+90%).

Clearly, current policies are not very employment-positive. We could start by noting that the only way 90% of the populace can buy more goods and services is if the cost of living declines, i.e. deflation.

We might also concede that saddling employers with skyrocketing healthcare costs is a tremendous drag on hiring. There is nothing sacrosanct about employer-paid health coverage; it was more an historical accident than a well-planned policy. It may be time to scrap employer-paid healthcare and set up a prevention-only national system and open the healthcare field to true competition. A Sustainable National Healthcare System: Prevention Only (August 20, 2012).

Perhaps corporate taxes could be radically lowered for companies that invest in domestic human capital. Were the nominal corporate tax rate 0% for companies that produce goods and services in the U.S. with U.S. workers, we might find such incentives yield significant employment dividends even as corporate tax revenues decline. (If more enterprises are launched and more people are employed, taxes will rise without needing to boost tax rates.)

The current de facto policy of inflating asset bubbles to spark a "wealth effect" is no substitute for policies that make it less burdensome to start new enterprises and hire employees.


NOTE: gifts/contributions are acknowledged in the order received. Your name and email remain confidential and will not be given to any other individual, company or agency.
Thank you, Ralph S. ($5/month), for your monstrously generous subscription to this site --I am greatly honored by your support and readership.