No conventional scenario accounts for the methodical disabling of the communications systems, the bizarre altitude changes and professional navigation to way points, or the presumed turn south and a flight path that extended to at least 8:11 a.m.

UPDATE ON POSSIBLE DEBRIS: the 24-meter (79-feet) object is located far to the south of the search field indicated on the map below. The remote area is known as a floating junkyard, so while this could be yet another false lead, it appears to be the only credible lead at this point: If this is the debris of Malaysia Airlines Flight 370, what happens next?

Every plausible theory about what happened to Flight 370 has to not only fit the most reliable facts (radar tracks and satellite data) but basic geography. A widely circulated scenario proposed by Chris Goodfellow theorizes that a fire (from either a smoldering front tire or electrical fire) filled the cockpit with smoke and caused the pilots to head for the nearest major runway which happened to be to the west on Langkawi.

The reason why the transponder and ACARS systems were deactivated is the pilots pulled all the fuses in an attempt to control the electrical fire.

In Goodfellow's reconstruction, this gallant effort failed and the pilots were overcome by fumes and lost consciousness. The aircraft then flew on the westward heading on autopilot until it ran out of fuel and crashed into the sea.

THis scenario has been critiqued on a number of points: Here's What Pilots Think About The New Idea That The Missing Plane Flew For Hours After A Fire Killed The Pilots documents that full-face oxygen masks were easily accessible, nixing the notion that the pilots could not possibly have had time to radio air traffic control.

A Startlingly Simple Theory About the Missing Airliner is Sweeping the Internet. Its Wrong addresses other problems with the scenario.

I've prepared a map with the "it has to be somewhere along this line" arc based on satellite data and Flight 370's last known west-bound heading. This heading has been confirmed by both Malaysian and Thai military radar.

if the pilots lost consciousness and the aircraft continued west on autopilot, the 777 would have been approaching India before its fuel ran out and and it ditched into the sea. This is not even close to the arc traced by the satellite transmission at 8:11 a.m. 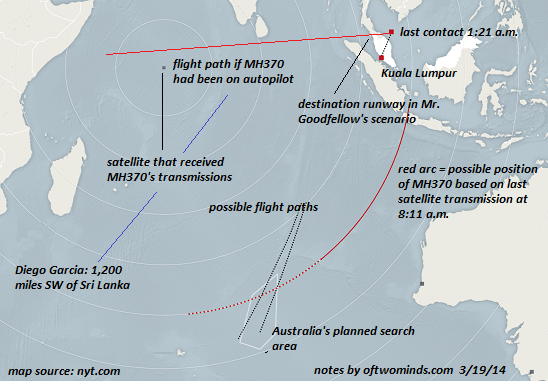 The satellite data also conflicts with theories that have Flight 370 being diverted to Diego Garcia, a U.S./British military base 1,200 southwest of Sri Lanka, which is well away from the arc.

The problem is that various pieces of data do not support conventional scenarios based on past losses of commercial airliners. We can start with the fact that the Boeing 777 is one of the safest aircraft in commercial use. The only fatalities occurred quite recently as a result of pilot error.

The fire scenario in which pilots can't find time to radio ATC (air traffic control) but they manage to navigate multiple way points using the flight computer is not plausible. Not only do the masks and the safety record of the 777 make this a stretch (not to mention that a DC-8 is not necessarily a useful analogy to a 777) it's not yet clear (due to conflicting reports) whether the pilots could deactivate the ACARS system from the cockpit; some reports suggest that requires opening a floor compartment in the aisle outside the cockpit.

The methodical disabling of the two separate communications systems is inconsistent with an emergency that allowed the pilots enough time to change course via the flight computer, navigate to way points and change altitude.

The bizarre altitude changes (climbing to 45,000 feet, well beyond the aircraft's designed ceiling and then descending to 23,000 feet, according to Malaysian military radar) and lengthy flight path along navigational way points do not align with the pilot suicide scenario. In the two previous instances of pilot suicide (both denied by the host nations for reasons of face), the suicidal pilot dove the aircraft into the sea early in the flight.

The complex flight path westward does not align with this unless the pilot was aiming to ditch the aircraft beyond the reach of recovery. And if this were the goal, why climb to 45,000 feet and then descend to 23,000?

My pilot sources report that the 777 (along with all other commercial aircraft) are designed to fly within a narrow envelope of efficiency to conserve fuel. It's pushing the envelope hard to take an almost fully loaded airliner above its designed ceiling (around 43,000 feet). What possible motivation could there have been for this action, and the subsequent drop to 23,000 feet?

A struggle with hijackers comes to mind, but there is no solid evidence that any of the passengers or other crew members had the motivation or training to hijack the aircraft and either fly the 777 in the professional manner demonstrated or coerce the pilots to disable the communications systems and proceed west.

The passage over known Malaysian military bases suggests to some observers that the pilots may have been trying to draw a response, i.e. force the Malaysian Air Force to scramble fighters, but this did not happen.

That leaves a struggle between captain and co-pilot as one explanation for the wild changes in altitude, but if that occurred, the rogue pilot retained control and the communication systems remained off.

Since there is no evidence (after 12 days) that Flight 370 headed north and landed or crashed on land, official speculation has turned to the southern arc.

In order to reach the southern reaches of the arc, Flight 370 had to have turned south sometime after Malaysian and Thai military radar lost contact with the 777 around 2:30 a.m. Once again, this decision (the only possible choice left if the northern route has been ruled out) does not align with hijacking aimed at stealing the aircraft or holding the passengers hostage, given the paucity of potential landing sites. And if the presumed hijacking was intended to be an act of terrorism that murdered all 239 people on board, why fly the 777 six hours beyond the point when the presumed hijackers took control of the cockpit?

While it is certainly possible that the pilots were incapacitated by some event after they turned the aircraft south and the 777 flew on autopilot until it crashed somewhere close to this arc, the fact that the aircraft was obviously being piloted up to that turn south only deepens the mystery.

No conventional scenario accounts for the methodical disabling of the communications systems, the bizarre altitude changes and professional navigation to way points, or the presumed turn south and a flight path that extended to at least 8:11 a.m., almost six hours after the aircraft flew beyond the Malaysian military radar's range.

Although there is no public indication that the SOSUS system detected an acoustic signal that could have been Flight 370 crashing into the sea, we can anticipate that no public announcement would be made. Rather, various naval assets would be directed to search in the appropriate area.

Unfortunately, even if the black box is recovered, we may never know what transpired in the cockpit from 1:00 a.m. on, as the black box only records the previous two hours of cockpit voice data (it records 25 hours of other flight data). If the aircraft was on autopilot those last two hours (or was flown by a silent human pilot), there may well be little record of events in the cockpit prior to the two-hour mark.

It increasingly appears to be a mystery that will never be solved with any certainty.

My previous entry on Flight 370:

Thanks to Roy M., M33 and others for correcting my egregious error on the map.