Since stock markets are ultimately underpinned by corporate profits, let's ask: What factors could crush profits in 2016?

The basic idea of a balance sheet recession (attributed to Richard Koo) has been well-publicized: when the liability (debt) side of household and business ledgers reach danger heights, stakeholders respond by reducing debt and increasing savings rather than increasing spending and debt.

The result is a slowdown, a balance sheet recession.

What do we call a recession triggered by a collapse in profits? Corporate profits have soared to unprecedented heights in the "recovery" of 2009-2015: it's certainly been more than a recovery in terms of corporate profits: 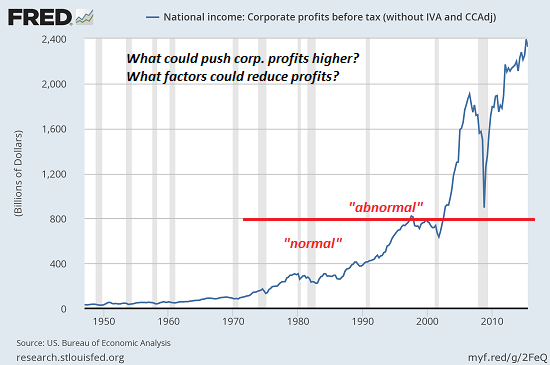 What's left to push profits even higher? The mainstream answer is: just more of the same: more global growth, more expansion in emerging markets (EM), renewed monetary and fiscal stimulus in the developed markets (DM), and the tailwind of lower energy costs.

The possibility that the era of unprecedented profits might have been an aberration and is now drawing to a close does not register in the mainstream financial media. If we look at the red line I drew on the chart, it's easy to see the incredibly abnormal rise in corporate profits in the era of rapid globalization and financialization, both driven by cheap-money policies of central banks.

Note that profits literally exploded once central banks opened the credit spigots, and lending standards were loosened to the point there were no real standards (2002 onward).

The problem with bubble valuations is revealed when participants must sell to pay down debt. When the debt-monkey can't be dislodged from the debtor's back, assets must be sold. And in the thin, rarefied air of most markets, any real selling quickly crashes valuations, which were predicated on more buyers, not more sellers.

The initial wave of selling assets to pay down debt has already crushed emerging markets. Relatively modest selling in developed markets pushed many markets into Bear territory (down 20% or more).

Since stock markets are ultimately underpinned by corporate profits, let's ask: What factors could crush profits in 2016?

1. stronger U.S. dollar: as many of us foresaw, the stronger USD has pummeled U.S. corporate profits, much of which are earned overseas in other currencies:

Anyone who thinks the USD will give up its gains is dreaming:

Why the Dollar May Remain Strong For Longer Than We Think (September 17, 2014)

2. Emerging markets consumption is weakening. Crush a nation's currency and stock market, and spending atrophies. When spending sags, so do profits.

4. China. Imports to China are cratering. Profits will crater, too.

6. Diminishing returns on lower interest rates. Refinancing old debt at super-low rates boosted profits wonderfully the first time around, now, not so much: rates have been low for so long, there's no juice left in that lemon.

7. Energy savings have been banked. Airlines have feasted on record profits resulting from plummeting fuel costs, but the big gains have already been banked. If oil drops below $30/barrel, a few dollars can be picked up, but they won't match the gains reaped when oil fell from $100 to $30/barrel.

8. Risk-on borrowing is drying up. The global booms from 2002 - 2008 and 2009- 2015 were both driven by trillions of dollars of new (borrowed) money being dumped into risk-on assets--real estate development, stocks, junk bonds, shadow banking loans, etc.

This tide is now receding.

Elevated corporate profits since 2009 have largely reflected mirror image deficits in the household and government sectors, as households have taken on debt to maintain consumption despite historically low wages as a share of GDP, and government transfer payments have expanded to fill the gap, with 46 million Americans now on food stamps  a five-fold increase in expenditures since 2000.

Essentially, corporations are selling the same volume of output, but paying a smaller share in wages, with deficits in the household and government sectors bridging the gap. As households and government have shoveled themselves further into the hole, corporate profits have climbed higher on the adjacent pile of earth. Deficits of one sector emerge as the surplus of another.

If you think all this is a solid foundation for ever-higher profits, by all means go buy stocks with all four feet. But don't be surprised if the rest of the market disagrees at some point--for example, when even flim-flam accounting can't hide the fact that profits are in a free-fall back to "normal" levels 60% below current levels.