The Conflict within the Deep State Just Broke into Open Warfare

The battle raging in the Deep State isn't just a bureaucratic battle--it's a war for the soul, identity and direction of the nation.

When do the unlimited powers of the Intelligence/Security agencies threaten America's domestic and global national interests? The CIA and its political enablers claim the agency's essentially unlimited powers, partially revealed by Wikileak's Vault 7, pose no threat to America's interests, since they are intended to "defend" American interests.

This is the wormhole down which civil liberties and democracy have drained. It is an extraordinarily defining moment in American history when the director of the FBI publicly declares that there is no such thing as "absolute privacy" in the U.S.

In effect, privacy is now contingent on the level of interest the Security State has in the private conversation/data. If we read the U.S. Constitution, we do not find such contingencies: civil liberties are absolute. Post-1790 presidents have temporarily mooted civil liberties in time of war, and the CIA-led camp of the Deep State has justified its unlimited powers by effectively declared "a state of war is now permanent and enduring."

So what's left to defend if America has become the enemy of civil liberties and democracy, i.e. become a totalitarian state ruled by Security Services and their political henchmen and apologists?

I have long suggested that the tectonic plates of the Deep State are shifting as the ruling consensus has eroded. Some elements of the Deep State--what I call the progressive wing, which is (ironically to some) anchored in the military services-- now view the neocon-CIA (Security State)-Wall Street elements as profoundly dangerous to America's long-term interests, both domestically and globally.

I have suggested that this "rogue Deep State" quietly aided Donald Trump (by subtly undermining Hillary Clinton's campaign) as the last best chance to save the nation from the neocon's over-reach that the Establishment's Wall Street-funded leadership (Bush, Clinton, Obama, et al.) has overseen--including granting the CIA and its allies virtually unlimited powers unhindered by any effective oversight.

This profound split in the Deep State has now broken into open warfare. The first salvo was the absurd propaganda campaign led by Establishment mouthpieces The New York Times and The Washington Post claiming Russian agents had "hacked" the U.S. election to favor Trump.

This fact-free propaganda campaign failed--having no evidence didn't work quite as well as the NYT and Wapo expected-- and so the propaganda machine launched the second salvo, accusing Trump of being a Russian patsy.

The evidence for this claim was equally laughable, and that campaign has only made the Establishment, its propaganda mouthpieces and the neocon Deep State look desperate and foolish on the global and domestic stages.

The desperate neocon Deep State and its Democratic Party allies went to absurd lengths to undermine Trump via the "Boris and Natasha" strategy of accusing Trump of collaborating with the Evil Russkies, even going so far as to briefly exhume former President G.W. Bush from deep-freeze to make a fool of himself, saying the Trump-Evil Russkies connection should be "investigated."

Now the rogue elements have launched a counterstrike--Vault 7. Here is one example of how quickly the CIA's over-reach has been absorbed by the body politic: 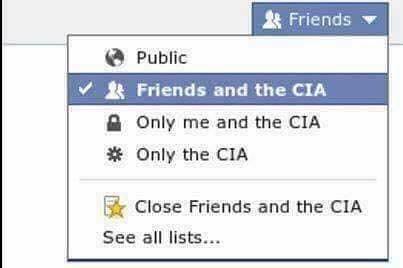 We now know that the CIA maintained a special program (UMBRAGE) to mimic Russia-based hackers and create false trails back to fictitious "Russian hackers." A number of highly experienced analysts who reviewed the supposed "Russian hacks" had suggested the "evidence" smelled of false trails-- not just bread crumbs, but bread crumbs heavy-handedly stenciled "this is Russian malware."

The body count from Vault 7 has not yet been tallied, but it wouldn't surprise me if former President Obama and his team eventually end up as political casualties. Non-partisan observers are noting all this over-reach occurred on Obama's watch, and it hasn't gone unnoticed that one of Obama's last executive orders stripped away the last shreds of oversight of what could be "shared" (or invented) between the Security Agencies.

Indeed, the entire leadership of the Democratic Party seems to have placed all their chips on the increasingly unviable claim that the CIA is the squeaky clean defender of America.

Vault 7 is not just political theater--it highlights the core questions facing the nation: what is left to defend if civil liberties and democratically elected oversight have been reduced to Potemkin-village travesties?

If there are no limits on CIA powers and surveillance, then what is left of civil liberties and democracy? Answer: nothing.

The battle raging in the Deep State isn't just a bureaucratic battle--it's a war for the soul, identity and direction of the nation. Citizens who define America's interests as civil liberties and democracy should be deeply troubled by the Establishment's surrender of these in favor of a National Security State with essentially no limits.

Americans tasked with defending America's "interests" globally should be asking if a CIA/NSA et al. with unlimited power is detrimental to America's soft and hard power globally, and toxic to its influence.

The answer is obvious: a CIA with unlimited power and the backing of a corrupt Establishment and media is more than detrimental to America's soft and hard power globally--it is disastrous and potentially fatal to America's interests, standing and influence.

Those of us on the sidelines can only hope that the progressive wing of the Deep State, the rogue elements who see the terrible danger of an unlimited National Security State, will succeed in undermining the powerful political support for this toxic totalitarian regime.