How the Middle Class Lifestyle Became Unaffordable   (May 7, 2014)


There are four structural drivers behind the soaring costs of the middle class lifestyle.

Why have the costs of a middle class lifestyle soared while income has stagnated? Though it is tempting to finger one ideologically convenient cause or another, there are four structural causes to this long-term trend:

2. Systemic headwinds to the current version of capitalism

The key take-away here is that the first two causes are structural and cannot be changed by passing a law or funding another state bureaucracy. Though many believe they can tax global corporate capital to eliminate wealth inequality, capital is mobile and will move to where it can expand. The dominance of money in politics also means that the political machinery is for sale to the highest bidder, which just so happens to be global capital.

No wonder the middle class is evaporating. These trends are far more powerful than the proposed solutions.

Let's start with Baumol's cost disease, named after economist William J. Baumol, whose work with William G. Bowen I described in Productivity, Baumol's Disease and the Cliff Just Ahead (December 8, 2010).

Baumol examined the relationship between productivity and cost, and found that productivity in labor-intensive services (for example, nursing and teaching) had intrinsically lower rates of productivity increases than goods-producing industries.

The performing arts offers a striking example: it takes the same time to learn and play a Mozart concerto now as it did in 1790, so productivity gains will be modest.

Note how manufactured goods such as TVs, clothing and autos fell in price while education and healthcare soared. Baumol foresaw the crunch that his theory predicted: as healthcare and education took a larger share of the national income/GDP, taxes would have to rise substantially to pay for those services.

He described the social choices we faced in a seminal 1993 paper: Health care, education and the cost disease: A looming crisis for public choice.

Baumol under-estimated the power of the low-productivity sectors such as healthcare and higher education to exploit political capture to increase their share of the national income. In other words, the extraordinary rise in healthcare and higher education costs arise not just from the low productivity of these sectors, but from their cartel power to obscure the true costs of their bloat and push prices higher.

Baumol also failed to appreciate how the state (government) is the willing partner in this exploitation of low productivity. The state enforces the monopoly pricing power of these cartels. As a result, potential gains in productivity from technology are suppressed to protect the cartels from any real competition. (The same can be said of the military-industrial complex and other state-protected cartels.)

That's how we end up with college degrees and medical procedures that cost more than a house.

The second set of systemic cost drivers were identified by Immanuel Wallerstein, who views these forces as threats to capitalism's prime directive, which is to accumulate more capital:

1. Urbanization, which increases the cost of labor

2. Externalized costs (dumping private waste into the Commons, environmental damage and depletion, etc.) are finally having to be paid

I covered these headwinds to capitalism in Is This the Terminal Phase of Global Capitalism 1.0? (February 8, 2013).

In brief, urbanization drives wages higher, regardless of the era or economic system, and external costs such as pollution and depletion must eventually be paid out of labor and capital alike. The demand for more state services is unquenchable, and the state responds by buying off key constituencies with more benefits.

The State has two core mandates: enforce quasi-monopolies and cartels for private capital, and satisfy enough of the citizenry's demands for more benefits to maintain social stability.

If the State fails to satisfy enough of the citizenry's demands, it risks social instability.

That is the nation-state's quandary everywhere. With growth slowing and parasitic cartels increasingly difficult to maintain and justify, the State has less tax income to fund its ever-expanding social spending.

In response, the State raises taxes and borrows the difference between its spending and its revenues. This further squeezes spending as the cost of servicing debt rises along with the debt. The rising cost of debt service is an ever-tightening noose that cannot be escaped. 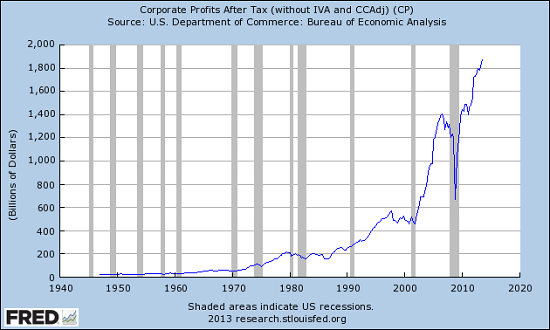 And this leads us straight to financialization, the parasitic extraction of profits from the real economy by finance and the state. Remember Wallerstein's key insight: the state depends on cartel pricing to sustain high labor costs, investment and the taxes that flow from high wages and profits. As the real economy stagnated, the state (which includes the Federal Reserve) incentivized financialization and speculative credit bubbles to keep the money flowing to feed its own spending.

In other words, the state isn't just a passive patsy in financialization--it is a willing partner, because financialization funds the state. Just look at the enormous expansion of property taxes and income taxes that flowed from the housing and stock market bubbles.

In essence, the state has no choice: to save itself, the middle class must be sacrificed. From the point of view of global capital, the ideal partner is a powerful central state that imposes cartel pricing on the economy: $200 million a piece F-35 fighter jets, $100,000 college diplomas, $200,000 medical procedures, $1,000 a pill medications, etc.

From the point of view of the state, it's more important to protect corporate profits and preserve the ability to borrow another trillion dollars at near-zero interest rates than it is to restore a vibrant middle class.

Debt-serfdom works just fine for the financial sector and the central state that enforces the serfdom. Food stamps (bread) and distracting entertainment (circuses) are cheap. What's not to like about debt-serfdom to those in power? Not only is it an ideal arrangement, it's the only one left to the state and its partner, global capital.


Want to give an enduringly practical graduation gift? Then give my new book Get a Job, Build a Real Career and Defy a Bewildering Economy, a mere $9.95 for the Kindle ebook edition and $17.76 for the print edition.


Planning your summer garden? Longtime oftwominds.com supporter Everlasting Seeds has a deal for you.

25% off every seed collection including Garden in a Can (79 different Heirloom Seed varieties).