The Powers That Be are perfectly fine with your transition to proletarian debt-serf.

Yesterday we covered the usual suspects in the decline of the middle class as a financial-political bulwark against oligarchy / dominance of rentier elites: globalization, automation and the asymmetric distribution of rewards favoring the few over the many.

1. I hope you won't be too shocked that the core dynamic driving middle class decline is the way we create and distribute money, i.e. central-planning by central banks. As I have explained many times, those closest to the central bank money spigots can borrow essentially unlimited sums at near-zero interest rates.

Those with unlimited credit lines at low rates of interest have an unbeatable advantage over everyone else, i.e. the middle class. Those with access to nearly-free money can outbid everyone else for productive assets, driving up the price of these assets and making them unaffordable to all who have to pay market interest rates.

Interest income matters to the middle class, which has to avoid risky financial leverage lest the household wealth vanish in another 2008-09 Global Financial Meltdown. By lowering the cost of money to private-sector banks (1% or less), central banks effectively transferred billions of dollars in interest income from the middle class to the Too Big To Fail money-center banks.

Meanwhile, asset prices has skyrocketed, pricing out most of the middle class and impoverishing those who do buy at nosebleed valuations. Nothing says "debt-serf" quit like $100,000+ student loans and a $300,000 mortgage.

2. The federal government (the state) now funds and enforces rentier-cartels that have pushed the cost of healthcare and education through the roof. This is why I call our economy a state-cartel system: the state defends cartels against competition, and the cartels can charge prices far above what an open market would support.

As household earnings have stagnated for decades, the cost of healthcare and higher education have soared as these cartels jack up prices with state approval. In effect, healthcare and higher education are extensions of the central state, as the central state funds, manages and enforces the cartels' power and pricing. The losers are the customers, who must pay the price or forego a college diploma, healthcare, etc.

The net result of soaring prices for college diplomas, housing and healthcare is the gradual impoverishment of all whose incomes haven't increased substantially. This includes the vast majority of the middle class.

These were cheap because they were operated as utilities. Nobody got super-wealthy operating a hospital, originating Mom and Pop mortgages, or running a state university.

Now all three have been financialized into immense profit centers that are enriching the few at the expense of the many. Once the federal government guaranteed mortgages and student loans, and took control of the healthcare industry, prices skyrocketed and those at the top of the wealth-power pyramid skimmed staggering profits from sectors that were once like utilities: boring, low cost, efficient.

By the time all the regulatory burdens are added onto the inherent risks of starting a new business, relatively few people are willing to risk everything they own by starting a small business, or joining a worker owned co-op or other social enterprise.

The decline of small-scale entrepreneurial activity is no surprise: the system explicitly gives global corporations the advantages of state support and funding, regulatory barriers/bottlenecks, and access to nearly unlimited cheap credit.

Healthcare costs are crushing the middle class that doesn't qualify for Medicaid (state-paid healthcare)--this is a key state-cartel in action:

And here's another key state-cartel in action: the higher education racket: funded and enforced by the central state, of course.

Note what happened when financialization really kicked in circa 1981: income skewed asymmetrically to the top. 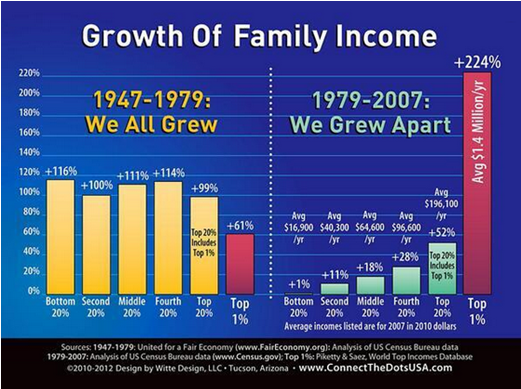 But no worries, debt-serfs who were once middle class: the top 5% have lots of low-paid service work for you. The career choices are truly awesome: you can deliver meals to the desks of overpaid functionaries and overworked programmers, walk the precious dogs of your betters, watch their spoiled kids, serve their coffee, clean their McMansions, polish their expensive autos--the list of low-paid service jobs is nearly endless!

Memo to what's left of the middle class: the Powers That Be are perfectly fine with your transition to proletarian debt-serf. All the handwringing about the decline of the middle class is just alligator tears shed while they gobble up your wealth and labor.