The front door is covered with official pronouncements of "the China Dream" and blustery demands of hegemony, but the back door is choked with members of the financial/political Elite fleeing China and taking their wealth with them.

The first thing to understand about China is there is always a front door and a back door to everything. The front door is what's presented to the outside world; the back door is for everything that doesn't fit the PR image created by the front door.

The front door presents positive "face," the back door is for everything that would "lose face," so it's hidden and never discussed, except in private, and only with trusted family or friends.

A friend who once worked for the Chinese government recently returned home after several years absence, and found that all her bosses had moved to the West: Australia, Canada, etc. These were typical officials: their base salary was low but they managed to buy multiple homes, support mistresses, have upscale autos, and so on. 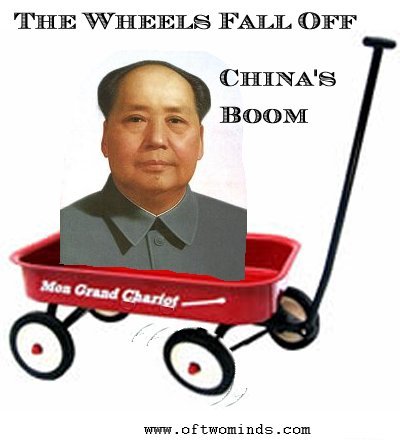 In a word, ill-gotten wealth. There are tens of thousands of these beneficiaries of China's boom in credit and corruption, and they have all either fled (with their ill-gotten wealth) to the West or "safe-haven" East (Singapore, for example). Those who haven't fled yet have passports to a safe haven, and cash and homes overseas awaiting their arrival.

It is common knowledge that the offspring of top officials all have passports and homes awaiting them in the West.

That every one of your political bosses has left China is an astounding revelation into the mindset of those who have benefited most from China's boom: they obviously fear that some upheaval could strip away their ill-gotten wealth, otherwise, why not simply move to some wealthy enclave in China?

The front door is covered with official pronouncements of the China Dream and blustery demands of hegemony, but the back door is choked with members of the financial/political Elite fleeing China and taking their wealth with them. All of this is well-known, yet it is spoken of in hushed tones, lest China lose face from this wholesale exodus of those who stripmined the nation with credit and corruption.

If the Elites had any faith in China's future, and in the security of their wealth, why would they be fleeing China in perhaps the greatest peacetime exodus of wealth the world has ever seen? Estimates of the money flowing out of China are merely guesses, of course, but the numbers run into the tens or even hundreds of billions of dollars.

Those in the political/financial Elites have the best information about conditions in China. What speaks louder, actions, or empty words? Actions, without a doubt. It's difficult to see how China can be as stable as advertised when its monied Elites all have back doors out of the country and homes awaiting them in the West. The most fearful (or guilty) aren't waiting around to risk the future in China; they're already long gone. What does that say about the front door pronouncements of hegemony and dreams? The inconvenient truth is the Chinese Dream is to live in Palo Alto:

Chinese Dream: To Become the Father of an American, by Jia Jia "When Bill Clinton visited China in 1998, a female student named Ma Nan at Peking University stood up and denounced the appalling human rights condition in the US. She was supposed to file a question, but she sounded more like she was delivering a lecture. Later on, she married an American man, gave birth to a son, became the mother of an American, and departed China for good."

Young, Gifted, and Chinese "Facing the future of housing, marriage, and job, why do our hearts beat not with expectations but fear?"

China in Revolution and War "Several serious problems in China could trigger a major crisis, potentially igniting either a domestic revolution or foreign war."

How will a slowing China cope with rapidly aging buildings?