Will the Dollar Lose its Reserve Currency Status to an SDR Currency?   (November 14, 2013)


Since the SDR is just an aggregate of fiat currencies, it cannot really change the fundamentals of the current status quo.

Many observers believe the U.S. dollar (USD) will lose its status as the world's reserve currency sooner rather than later. Proponents of this view often mention China's agreements with various trading partners to settle trade in their own currencies rather than the dollar as evidence of this trend.

More substantial evidence can be found in the diversification of reserves held by many nations. The euro now makes up about a fourth of all currency reserves: 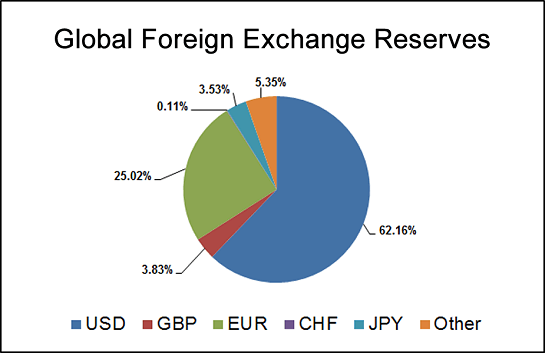 Here is the IMF (international Monetary Fund) page on voluntarily reported currency reserves: Currency Composition of Official Foreign Exchange Reserves (COFER). Note the large amount of reserves that are not "allocated," i.e. the currency being held is not specified.

Some see the replacement of the U.S. dollar by some other currency as a welcome development, not just for the world economy but for the U.S., as the reserve currency has substantial burdens. Regardless of whether such a replacement would be positive or negative, many analysts see no plausible alternative to the USD as the primary reserve currency for a host of reasons.

Another camp sees China's purchases of gold as paving the way for China's currency (renminbi a.k.a. yuan) to replace the dollar as the global reserve currency. Those who have studied China's policy makers doubt this is the goal; rather, they see China as most likely pursuing a multi-polar world in which no one nation issues the reserve currency.

One set of observers has long held that the ideal replacement for the dollar is a hybrid currency issued by the IMF called SDRs (Special Drawing Rights). The IMF describes the SDR thusly:

"The SDR is an international reserve asset, created by the IMF in 1969 to supplement its member countries' official reserves. Its value is based on a basket of four key international currencies, and SDRs can be exchanged for freely usable currencies."

The SDR seems to many to be the ideal replacement of the USD as the reserve currency, especially if China's currency joins the basket of currencies that make up the SDR.

Though the advantages of a multi-currency basket are fairly self-evident, questions remain if the SDRs are a realistic or practical option. These questions come to mind:

1. Since the SDR is just a basket of currencies, doesn't it simply aggregate the weaknesses of all fiat currencies? In other words, what happens to the value of the SDR when priced in gold, oil or other commodity if every nation in the basket prints its currency with abandon? The SDR will lose value just like any any fiat currency, because it is simply a composite fiat currency.

2. Couldn't a nation simply hold all currencies in the SDR in the same percentages as in the SDR basket? Clearly, this is possible: a nation could acquire the same basket of currencies held by the SDR and in the same weighting. In that case, what is the purpose of the SDR?

3. What happens to the relative value of one of the constituent currencies in the SDR if the issuing nation experiences a currency crisis or devalues its currency by one means or another? Clearly, the relative weighting of that currency would decline within the SDR basket.

4. Since the SDR is just an aggregate of existing currencies, it is not an independent currency. An independent currency would need to be supported by either enforceable taxation rights or some commodity or basket of commodities: gold, for example, or a "bancor"-type basket of commodities (gold, oil, grain, etc.) owned by the issuing nation/entity.

(Another potential independent currency that could serve as a reserve currency is a non-state issued digital currency such as Bitcoin: Could Bitcoin (or equivalent) Become a Global Reserve Currency? (November 7, 2013). Digital currencies' valuation is based not on taxation or gold but carefully managed scarcity.)

Since the SDR is just an aggregate of fiat currencies, it cannot really change the fundamentals of the current status quo.

Boiled down to its essence, the SDR is presented as a shortcut solution to deeply seated problems. The reserve currency problem cannot be fixed by a basket of fiat currencies, as fiat currencies (and the trade imbalances they generate) are the problem.

Read the Introduction and the Table of Contents