The Bank of Japan's surprise expansion of financial stimulus strikes me as the monetary equivalent of Pearl Harbor --not in the sense of launching a pre-emptive war (though the move does raise the odds of a global currency war), but in the sense of a leadership pursuing a Grand Strategy to the point of self-destruction because they have no alternative within their intellectual and political framework.

In the years before Japan's December 7, 1941 attack on Pearl Harbor, the Imperial government's Grand Strategy was simple: bring the entire Asian-Pacific region under the control of the Japanese Empire. 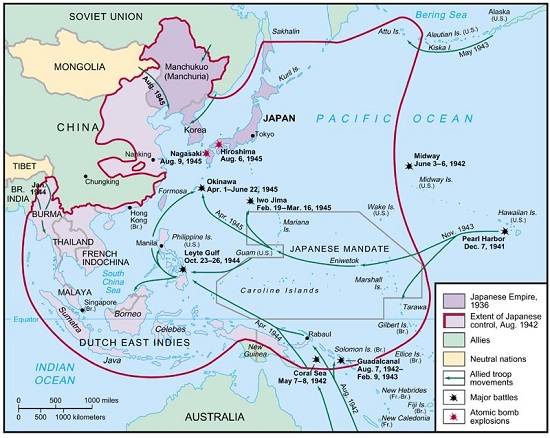 That this Imperial Project would necessarily lead to conflict with the United States was baked into the project from the moment of its inception.

The Japanese military had embraced the notion of the Decisive Battle as its core war-fighting doctrine. The goal is to draw the opponent's main force into a battle where that force could be decisively destroyed. With their military power shattered, the opponent would be forced to sue for peace.

Just as the logic of Imperial expansion made the attack on Pearl Harbor inevitable, the logic of the Decisive Battle led to the crushing defeats at the Battle of Midway and Leyte Gulf.

It is this stubborn allegiance to a self-destructive strategy that reminds me of Imperial Japan's devotion to expansion. In the 25 years since the 1989 apex of Japanese credit-bubble triumphalism, these same policies--monetary easing, zero interest rates and fiscal deficits to fund Bridges to Nowhere--have only exacerbated the stagnation of Japan's economy and social adaptability.

If this massive expansion of debt is the Decisive Monetary Battle that is supposed to defeat deflation and stagnation, it will inevitably result in defeat and capitulation.

What is needed is structural reform of the real causes of that stagnation--real political and financial reform that dismantle the structural causes of Japan's failure. But such a strategy is not even discussed, much less actively considered, because it would upend the powerful elites and vested interests who benefit from the status quo Grand Strategy.

As John Kenneth Galbraith observed: "People of privilege will always risk their complete destruction rather than surrender any material part of their advantage." This describes Japan's Status Quo of cartels and central state technocrats perfectly. Unfortunately, everybody else gets destroyed along with the Elites when the system implodes.

To lift productivity, Japan needs serious structural changes to promote creative destruction, the process of replacing decaying firms with vibrant ones. The sectors of Japans economy that face international competition, such as the auto industry, enjoy high productivity. But the lions share of the economy is domestically oriented, and much of it is shielded from both international and domestic competition by domestic regulations and cartel-like business practices.

Japans milk market isnt even open to domestic competition. The powerful farm cooperative known as Japan Agriculture uses its stranglehold on distribution to protect inefficient farmers in the main part of Japan by hindering shipments of milk from the larger, more efficient farms in the northern island of Hokkaido. Tokyo turns a blind eye because Japan Agriculture is a powerful electoral ally of Abes political party and because rural voters are disproportionately represented in the Diet. A real reformer would scrap Japan Agricultures exemption from the Antimonopoly Act, a law passed in 1947 designed to encourage competition, and use the act to crack down on such practices.

The net result of protecting cartels and fiefdoms by lowering interest rates to zero and flooding the financial sector with "free money" is social depression, characterized by the erosion of employment, and a hollowing out of the economy's core strengths:

Since Japans rigid labor laws make it nearly impossible to lay off permanent employees in downtimes, companies now tend to fill open slots with part-time or temporary workers, and they typically pay them a third less. Today, 17 percent of Japanese men aged 25 to 34 hold such second-class jobs, up from four percent in 1988. Low-paid temps and part-timers now make up 38 percent of Japanese employees of all ages and both sexes -- a stunning figure for a society that once prided itself on equality.

Trying to "fix" a sclerotic, inefficient state-cartel economy by boosting inflation--the ultimate goal of quantitative easing and the Monetary Pearl Harbor-- is a self-liquidating path to destruction:

Since 1997, wages in Japan have fallen by nine percent in real terms. They are expected to continue falling, despite highly advertised wage hikes by a few hundred giant firms whose profits from overseas sales have been artificially boosted by the weaker yen. Abe claims that wages will rise once workers and firms come to expect inflation. In reality, deflation is not the cause of Japans problems but a symptom. Trying to cure Japans malaise by generating inflation is like trying to cure a fever by putting ice on the thermometer.

The same devotion to a self-destructive Grand Strategy characterized Japan's Imperial High Command: dissent was suppressed, lest the truth step on powerful toes. And so the voices of experience within the Establishment who recognized the enormous risks of the Grand Strategy were ignored or silenced.

Admiral Yamamoto, architect of Pearl Harbor and Japan's early victories in the Pacific, provided one such voice of caution: "In the first six to twelve months of a war with the United States and Great Britain I will run wild and win victory upon victory. But then, if the war continues after that, I have no expectation of success."

Despite his reputation and rank, his influence within the Power Elite was limited. The Grand Strategy of self-destruction played out with all the hubris and inevitability of a classic tragedy.

Now the Bank of Japan is pursuing its own self-destructive tragedy, and all the world can do is watch from afar and hope the eventual collapse of this Grand Strategy doesn't take the entire global financial system down with it.