The Engine of Inequality: Privilege

This is what we're up against: a status quo that has institutionalized soaring inequality and rising poverty as the only possible output of defending the privileged few at the expense of the many. 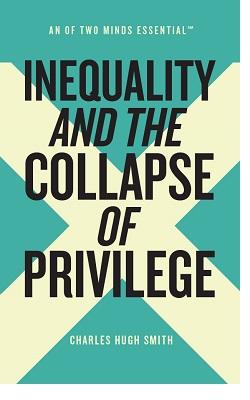 We all know wealth/income inequality is soaring. I've published many entries on this topic (please see the three charts below as a refresher), and it's clear there are multiple sources of rising inequality: globalization and technology, which concentrate gains in relatively few hands, and inflation, which reduces the purchasing power of stagnating real wages.

But the dominant source of inequality is privilege--specifically, privilege that is institutionalized by the status quo.

This engine of inequality--institutionalized privilege--is the topic of my new book, Inequality and the Collapse of Privilege ($3.95 Kindle ebook, $8.95 print edition).

The word "privilege" is tossed around rather loosely. What does it mean in economic and social terms? I differentiate between privilege, which is unearned, and advantaged, which is earned.

To reverse rising inequality, we must dismantle the institutionalized power of privilege and create universally accessible pathways to the advantages of building capital. A key part of my analysis is causally linking rising inequality, poverty and privilege.

Here is an excerpt of the book:

To understand poverty, we must first understand that an economy can be distilled down to two systems: ownership of income streams and the distribution of those income streams. Income flows from productive assets, i.e. the engines of wealth/value creation. Net income is simply the surplus between the cost of production (the inputs) and the value of what has been produced (the output).

There are various means of distributing this net income to participants in the economy: wages paid by owners of an income stream, income earned by individuals who own an engine of wealth, profits paid as dividends by owners of income streams, and wages paid by the State (i.e. government) from tax revenues collected from private income.

Productivity is a measure of how much output is generated from inputs. While there are various measures of wealth, the kind of wealth that matters in solving poverty are the engines of wealth that can be made more productive with investment, knowledge and innovation.

If we imagine the wealth in a pirates treasure chestgold coins, precious stones, etc.we find that this wealth is based on the relative scarcity of the items, not on their productivity. The precious stones are inert and do not generate goods and services. The productivity of precious stones is zero. These scarce items can act as money, but outside of an economy that generates and distributes income, their value is decorative.

In contrast, farmland and tools are productive assets, i.e. engines of wealth. The inputs of capital (land, tools, etc.) and labor yield an output with an economic value. Productive innovations leverage the inputs into higher yields. This increases the income and thus the value of the system of production.

This brief overview enables us to discern the systemic outlines of inequality and poverty: Economies with large surpluses but highly uneven distribution of the surplus will have relatively few very wealthy people and a much larger mass of poor people.

So what makes the distribution of income uneven? There are two basic dynamics:

1) the ownership of productive assets (the engines of wealth) is highly concentrated in a few powerful hands, or

2) the State harvests most of the economys surplus and distributes it to a small circle of politically powerful cronies.

In other words, poverty is the result of a highly asymmetric distribution of income from an equally asymmetric allocation of political power and productive capital.

We have seen that whenever ownership of the engines of wealth creation is concentrated in the hands of a few, the inevitable result is poverty. And if the State has unlimited power to expropriate private income streams, the result is highly unequal distribution of wealth as the States insiders scoop up the wealth.

Thus solving poverty distills down to (a) distributing new capital to disadvantaged households and their communities, and (b) then boosting the productivity of that capital.

This leads to two profound conclusions:

1) To solve poverty, ownership of the engines of wealth creation must be broadly distributed as new capital, and

2) The income generated by this broad ownership must be beyond the reach of an oligarchic State of entrenched cronies.

A systemic solution to inequality and poverty therefore has two parts: widely distribute the tools to build productive capital, and encourage innovation that boosts the productivity of those broadly distributed engines of wealth creation.

Historically, redistributive schemes to reduce poverty simply call for taking productive capital away from one person and giving it to another person. That these schemes fail is self-evident. A better, systemic solution to poverty is to distribute new capitalcapital that has been created by the work and innovation of newly enfranchised owners.

As we see on a daily basis, technology is enabling the low-cost distribution of digital (intangible) capital that enables other forms of productive capital.

Tangible capital can be confiscated by the State. But intangible capital is less accessible, especially if it is distributed and held in highly decentralized and encrypted forms.

A just, transparently governed State will naturally earn the trust of its citizenry who will then voluntarily pay taxes to support the States functions. But poverty is not associated with just, transparently governed states; it is associated with exploitive autocracies, oligarchies and monopolies/cartels dominated by parasitic, privileged elites.

Poverty is permanent unless income-producing capital can be held by individuals, households and communities in forms that cannot be easily confiscated by a State that enforces the privileges of the few at the expense of the many.

This is what we're up against: a status quo that has institutionalized soaring inequality and rising poverty as the only possible output of defending the privileged few at the expense of the many:

The institutionalized impoverishment of unprivileged students:

The institutionalized transfer of wealth to the top 0.1%:

The institutionalized decline of real income of the bottom 95%:

For what it's worth, my copy editor reckons this is my best book. It is, if nothing else, highly relevant to today's economic/social schisms. Inequality and the Collapse of Privilege ($3.95 Kindle ebook, $8.95 print edition).