My Crazy $17,000 Target for Bitcoin Is Looking Less Crazy

The basis of this admittedly crazy forecast was simple: capital flows.

I think we can all agree that bitcoin (BTC) is "interesting." One of the primary reason that bitcoin (and cryptocurrency in general) is interesting is that nobody knows what will happen going forward.

Unknowns and big swings up and down are characteristics of open markets. It's impossible to forecast bitcoin's future price because virtually all the future inputs are unknown.

We've lived so long with managed markets that only loft higher that we've forgotten that unmanaged markets are volatile and full of unknowns. We've forgotten that markets are reflections of all sorts of things, from human emotions to herd behavior to changes in the underlying Mode of Production, i.e. how stuff gets done, made, distributed and paid for.

Last May, when bitcoin was around $580, I distributed a back-of-the-envelope forecast of $17,000 per bitcoin to my subscribers and patrons ($5/month or $50 annually). (In June, I presented the case to subscribers of PeakProsperity.com, where I'm a contributing writer.)

The basis of this admittedly crazy forecast was simple: capital flows. There is around $300 trillion in financial "wealth" sloshing around the global economy, and another $200 trillion in real estate. (The sum of financial wealth is now much higher, due to the extraordinary gains in global markets.) I reckoned that if a tiny slice of that financial wealth flowed into bitcoin--1/10th of 1%-- the inflow of capital would push bitcoin to around $17,000 per coin.

If 1% of all that wealth sloshing around looking for yield and safety decided to find a home in bitcoin, the forecasted price was an insane $170,000.

Compared to this, $17,000 per BTC looked almost conservative. But since bitcoin was under $600 at the time, $17,000 looked pretty darn crazy. But the math looked compelling to me: $300 trillion in mostly mobile capital sloshing around an inherently unstable system, and little old bitcoin was worth a meager $9 billion. Given that the total number of bitcoin was limited to 21 million, it didn't seem much of a stretch to imagine a tiny sliver of all that capital flowing into BTC.

I heard many reasons why my scenario didn't hold water. Fair enough: the future is unknown, I could have been completely wrong, and BTC could have dropped back to $60 or $6.

I repeated my analysis to my subscribers and patrons in December 2016, when BTC had reached $900.

So now we know bitcoin didn't go to $60, or zero; it has climbed to $9,500 or so, a bit over halfway to my rough and unsophisticated back-of-the-envelope forecast of $17,000. Could BTC suddenly drop to $7,000? Of course it could; given its history, we should expect dizzying declines of up to 30% or more.

The interesting thing to me is that nobody knows what will happen going forward. Not knowing is refreshing. So is the opportunity to be right or wrong. This is what investing is supposed to be about.

There are all sorts of scenarios out there. Some will be right, some will be wrong, some will be half-right, and in all likelihood, stuff will happen that nobody predicted.

Here is a chart prepared by Tuur Demeester way back in 2013. It's interesting because nobody has a crystal ball, so we're all guessing based on what we expect to happen and what we see as the primary dynamics in play. 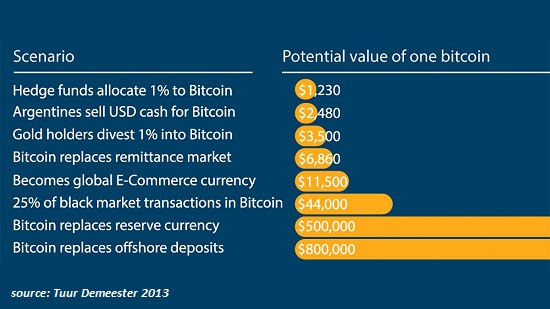 For what it's worth, here are my notes to subscribers/patrons from last May/June. To me, this was more or less stating what I took to be obvious. As for all the quibbles about centralization and decentralization: yes, yes, yes and yes--I realize fiat currency issued by banks has certain features of decentralization and that bitcoin is vulnerable to the dominance of (or manipulation by) self-serving players. But the question boils down to: what matters most going forward?

Unlike precious metals, crypto-currencies are easy mediums of exchange: you can send or receive bitcoin as easily as you send or receive dollars with PayPal, Dwolla or similar services. The great problem going forward for many people will be transferring their remaining financial wealth out of depreciating currencies in their homeland to some other currency in another more stable country.

When governments clamp down on bank transfers and impose other capital controls, this will become increasingly difficult in conventional channels. Should demand for bitcoin rise, the price will skyrocket. Right now all 17+ million bitcoin in existence are worth about $8 billion--a drop in the bucket of the world economy's $200+ trillion in financial assets and a tiny sliver of gold's global $7 trillion valuation.  It would take very little to push bitcoin's valuation to $80 billion, and this would still be a very thin slice of total financial assets.

The primary reason to follow crypto-currencies such as bitcoin and Ethereum's ether currency is that they are outside the control of the self-serving exploitive elites that control the credit money issued by central banks and states.

Crypto-currencies are revolutionary because they are independent of central banks and an easy medium of exchange. Gold and silver are independent forms of money, but other than silver coins, the precious metals don't lend themselves to acting as mediums of exchange in an increasingly digital world.

The key point here is the current financial system is highly centralized, while crypto-currencies are decentralized. Should a government decide to recapitalize bank losses with a bail-in, i.e. expropriating depositors' money to cover banks' losses, as was done in Cyprus, the depositors have no recourse: the state sends the order to the banks and the depositors' accounts are legally robbed.

While some people believe the government will be able to outlaw the use of crypto-currencies, or expropriate bitcoin just like it does with regular bank accounts, the decentralized nature of crypto-currencies makes this more difficult than in a system dominated by five Too Big To Fail banks and a central bank.

Another reason to follow the growth of blockchain applications (the technology underpinning bitcoin) is that these big banks have jumped on the blockchain and "smart contracts" technology of Ethereum. The politically potent banks recognize that they must either adopt these technologies or they will wither on the vine, and they will not look kindly on any government effort to outlaw the technologies that are their future.

The last reason to follow crypto-currencies is their potential to gain value. In a currency-swap, bitcoin acts solely as a medium of exchange between yuan and dollars. But due to the structural limit on the total number of bitcoin that can be created/mined (21 million, of which 17 million are in circulation), bitcoin is a store-of-value currency as well as a medium of exchange.

All the gold in the world is currently worth about $7 trillion.

All the bitcoin in circulation total $8 billion--an order of magnitude smaller than gold. Were bitcoin to represent 1% of total global financial assets, i.e. $2.9 trillion, that would represent a 362-fold increase, suggesting a price per bitcoin of $172,000.

That sounds insane, so let's say bitcoin becomes a mere 1/10th of 1% of total global financial assets. That equates to a price of $17,000 per bitcoin.

The point is that value is ultimately driven by demand, and demand is driven by utility. As bitcoins utility increases in a world of rising financial repression, capital controls and expropriations, devaluations, etc., the demand for bitcoin will likely rise as well.

And as bitcoins stability and valuation increase, the potential for a self-reinforcing feedback loop increases: as bitcoins value rises, it attracts more capital, which pushes prices higher, and so on.

Perhaps bitcoin will remain a financial novelty; perhaps it will suffer some fatal technological snafu. Maybe some new cryptocurrency will replace bitcoin. All of these are possibilities. But at this point, given the seven-year history of bitcoin and cryptocurrencies, the regulatory acceptance of the technology in the U.S., the Gold Rush mentality of major corporations into these technologies, and the rise of financial repression globally, it seems like a reasonably safe bet that cryptocurrencies may not just be around in seven years--they might play a larger role in global finance.