In this scenario, time is running out for Saudi Arabia's free-spending royalty and state-- and for all the other free-spending oil exporters.

While there are numerous dynamics at work in the turmoil roiling Saudi Arabia and by extension, the Mideast, one way to cut to the chase is to follow the oil, follow the money. Correspondent B.D. recently posited a factor that has been largely overlooked in the geopolitical / fate-of-the-petrodollar discussions:

Perhaps the core dynamic is a technical one of diminished oil production. Here is Bart's commentary:

"I think the Saudis may be quickly running out of profitable oil to produce/export.

I think they tried to over-produce for a while to damage the competition... and they now have production issues resulting from that. (As has happened in the past)

I think they may have recently slipped over the event horizon for being the world's swing producer of 'cheap-ish and abundant' oil. That has huge ramifications for the global markets ability to quickly respond to supply/demand fluctuations.

I suspect theyre no longer cutting production voluntarily ... they are now in the grip of a technically driven decline in output. (Why else begin selling off ARAMCO now?)

I doubt that many national economies can handle $70+ oil for very long... price will be limited by the ability of the consumers to pay. What I assume should happen is relentless severe volatility in the absence of a big swing producer that can open up or shut in production with comparative ease."

1. The days of sticking a straw in the sand and oil gushing out are long gone. Oil production now depends on costly technologies such as pressurizing the wells with seawater, CO2, etc.

2. The soaring population of Saudi Arabia is dramatically increasing domestic consumption of the Kingdom's oil, reducing the amount of oil available for export.

3. The industry is skeptical of official Saudi estimates of proven reserves and production capacity.

1. As B.D. posited, Saudi production is already flat-out, and there is no million-barrel-per-day slack that can be brought online to depress global prices, crushing competitors and maintaining control of crude prices. In other words, the Saudis no longer have the technical / production capability needed to control global oil pricing-- a power that they've enjoyed since 1973.

2. Saudi production is declining due to technical/real-world factors (depletion of super-major fields, etc.) that cannot be overcome at a financial cost that make sense at $50/barrel oil.

4. The Saudi royal family and the Kingdom's vast state welfare system is no longer sustainable should oil fall into the $30-$35/barrel range due to a collapse of global demand.

5. The only way out is to grab the power now that will be needed to slash domestic welfare and domestic consumption of oil/gas, i.e. the power to overcome resistance within the royal family to severe reductions in royal/central state budgets.

Geopolitically speaking, very few if any oil exporters are able to prosper and fund their regional/global ambitions if oil plummets to $35/barrel and stays there for years. Every oil exporter makes brave statements about being just fine with $25/barrel oil, but the reality is every major oil exporter is dependent on oil revenues of a scale that can only be generated at $50/barral and up.

The discovery of new oil fields has fallen far below global consumption. 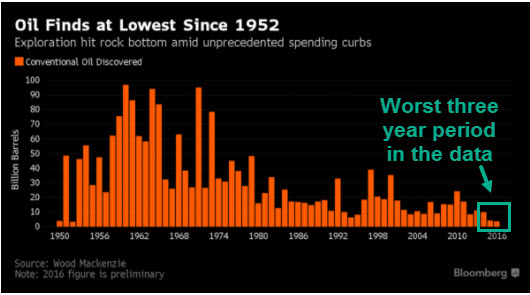 Meanwhile, U.S. producers have taken market share away from OPEC exporters, effectively reducing their influence over prices, as U.S. producers are to some degree the marginal swing producers. 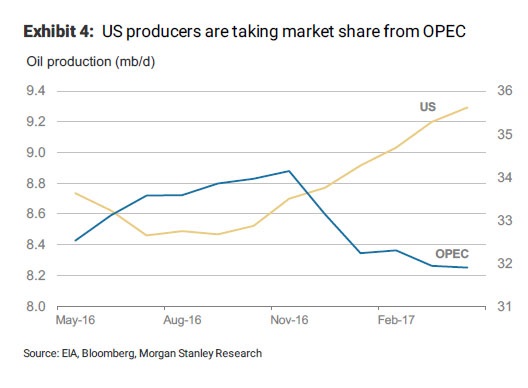 The costs of exploration and production changed around the turn of the 21st century. The cost of discovering, extracting, refining and transporting new oil have increased dramatically. 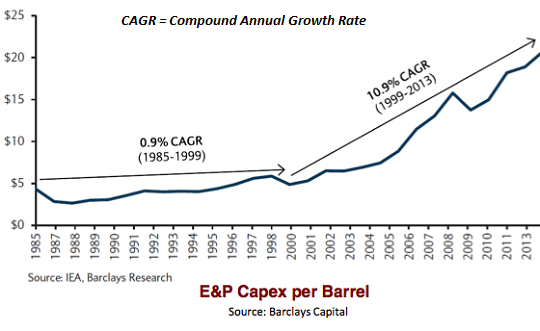 All this suggests oil will have to become more costly for it to make financial sense to produce it. But as B.D. observed (and analyst Gail Tverberg has explained in great detail), oil-consuming economies will be pushed into stagnation/recession by significantly higher oil prices.

In this scenario, time is running out for Saudi Arabia's free-spending royalty and state-- and for all the other free-spending oil exporters. As a global recession looms ever closer, every oil exporter edges closer to the event horizon of financial, social, and political disorder and upheaval. Venezuela is just the first domino that's toppling. The Saudi leadership is trying to avoid being in the line of oil exporting dominoes that will fall in the 2018 global recession.