Forget the Bogus Republican "Reform": Here's What Real Tax Reform Would Look Like

The point is to end the current system in which billionaires get all the privileges and financial benefits of owning assets in the U.S. but don't pay taxes that are proportional to the benefits they extract.

As has been widely noted, the Republicans' proposed "tax reform" is not only just more BAU (business as usual, i.e. cut taxes for the wealthy), it's also not real reform. At best, it's just another iteration of D.C. policy tweaks packaged for PR purposes as "reform."

1. Shred the entire 2,700 page tax code and replace it with a 25-page code. As I explained in The Fetid Swamp of Tax Reform (November 10, 2017), the 2,700 page current tax code is a complexity thicket designed to hide tax breaks and subsidies for big political donors.

Politicos give lip service to simplifying the tax code for PR purposes, but no politico actually wants radical simplification because this would eliminate the biggest grab-bag of political favors available to pass out to big donors.

Though radical simplification is politically impossible, it's the first and most important real reform.

Since the vast majority of financial transactions are executed on behalf of banks, corporations and wealthy individuals, a transaction tax would naturally collect more taxes from those at the top of the wealth-power pyramid. The transaction tax could be very modest because it would be collected on billions of transactions--everything from stock trades to purchases to loan payments.

Nobody cares if the owner banks in a tax haven, or declares taxes in another country; either they pay the property tax due or they forfeit their ownership.

A transaction tax eliminates all tax returns, all accounting for income, deductions and expenses, and correlates to wealth/income. The working-poor household would pay a transaction fee when they buy something at a dollar store, but the fee would be much less than current state sales taxes. The point of the transaction tax is that it includes all the transactions of the wealthy class that aren't simple purchases of goods and services.

To insure a progressive tax structure, financial transactions above certain thresholds of size and frequency would be taxed at a higher rate.

The fundamental idea behind a progressive tax structure is that taxes paid reflect the financial benefits flowing to the top class. In other words, taxes collected should reflect this chart of where the the gains have flowed in recent years: 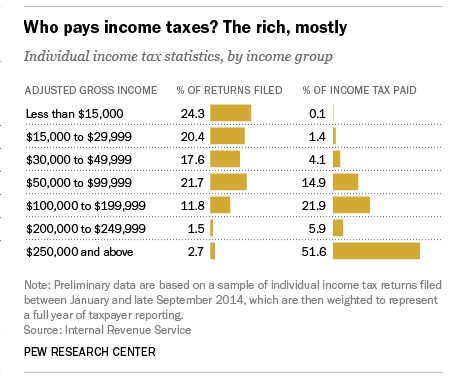 3. This reality demands a tax structure that correlates to where the gains in income and wealth are flowing. Once again the model should be property taxes: whatever entity owns assets in the U.S. should pay a slice of those assets in taxes.

It doesn't matter whether the entity is in Timbuktu or the Cayman Islands, or if they have a formidable array of attorneys slaving away for them; if they own an asset in the U.S.-- real property, stocks, bonds, mortgages,etc.--they have to pay the equivalent of a property tax on assets above a high threshold; high enough that the bottom 99.5% are for the most part excluded (for example, above $10 million).

There is no other way to break the injustice of offshore tax havens described in this article: Why have we built a paradise for offshore billionaires?

If an individual or corporation doesn't want to pay any tax in the U.S. in this tax structure, fine, all they have to do is sell all their U.S.-based assets and execute no transactions with any U.S.-based entities or assets.

The point is to end the current system in which billionaires get all the privileges and financial benefits of owning assets in the U.S. but don't pay taxes that are proportional to the benefits they extract. If billionaires want to move all their assets and transactions to some other nation, that's their prerogative. But at least they won't be pillaging the U.S. and its residents and getting away with financial murder.

A transaction-asset-based tax structure would free the bottom 99.5% of an immense burden of complexity and compliance while ensuring that taxes were levied in proportion to one's financial activities and that those benefiting the most from owning U.S. assets would pay taxes that were proportional to their benefits.

A 3% tax on all assets above $10 million would bring in around $1.5 trillion, the total amount collected in federal income taxes in 2015. A two-tiered transaction tax would bring in a similar amount, replacing the entire payroll taxes of Social Security and Medicare.

These two taxes would eliminate income and payroll taxes and all the enormous costs of compliance, and wipe out offshore tax havens. Since both transaction and asset taxes would be low, the motivation to sell all U.S. assets and execute no transactions involving U.S. based assets or entities would be low. Would it really be worth giving up all the enormous income streams flowing from U.S. assets to evade a 3% tax?