The nation's elites are desperate to misdirect us from the financial and power divide that has enriched and empowered them at the expense of the unprotected many. 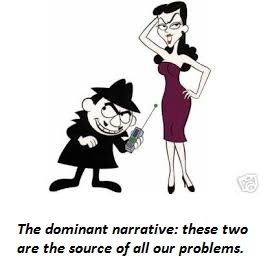 There are two competing explanatory narratives battling for mind-share in the U.S.:

1. The nation's social discord is the direct result of Russian social media meddling-- what I call the Boris and Natasha Narrative of evil Russian masterminds controlling a vast conspiracy of social media advertising, fake-news outlets and trolls that have created artificial divides in the body politic, or exacerbated minor cracks into chasms.

2. The nation's social discord is the direct result of soaring wealth/power inequality-- the vast expansion of the wealth and power of the nation's financial elites and their protected class of technocrat enablers and enforcers (the few) at the expense of the unprotected many.

Core to this narrative is the view that the elites and technocrats have engaged in a massive, coordinated official/media propaganda campaign of fake news aimed at persuading the bottom 95% that their prosperity and financial security are expanding when the reality is they have lost ground they will never be able to recover.

This propaganda campaign includes official (i.e. gamed/distorted) statistics such as unemployment and inflation, a reliance on the manipulated stock market to "signal widespread prosperity" and a steady drumbeat of corporate media coverage promoting the Boris and Natasha Narrative as the primary source of all our troubles.

The reality the elites must mask is that the few (the elites) have benefited at the expense of the many. The rising tide of financialization, globalization and neofeudal-neocolonial neoliberalism has not raised all boats; the yachts have floated higher while the rowboats have either sunk or are leaking badly.

The Boris and Natasha Narrative is the primary propaganda tool of the ruling elites and their technocrat/ corporate media enablers. This is of course classic propaganda: misdirect/distract the public from the reality of explosive wealth/power inequality; blame the other i.e. the enemy for the nation's self-generated woes, and claim to be helpless victims rather than oppressors: garsh, we'd all be just fine and dandy if the evil Russkies hadn't meddled in our election. Poor us, we're victims!

Look again at the chart of soaring inequality above and tell me the Power Elites of the nation are helpless victims of Russian meddling. Isn't it painfully obvious that the Boris and Natasha Narrative is just a tad too convenient and a bit too well-oiled not be a carefully planned and executed propaganda campaign to distract the public from the greatest divide in the nation's history between the elites and those they exploit/rule?

Orwell would approve of the Elites' Boris and Natasha Narrative, as it reverses the polarity of fake news: the elite campaign labels Russian-generated fake news as the problem to mask its own reliance on fake officially sanctioned news: everything's going splendidly because assets owned by the wealthy keep rising.

If you turned off the corporate media and social media for a week and asked yourself to identify the core causes of rising social discord, would you really think the Boris and Natasha Narrative was the dominant cause, or would you look at the greatest wealth/power inequality in the nation's history as having some causal connection to the rise of populism, social discord and a sense that we're less secure, less prosperous, less free and increasingly powerless in a nation dominated by elites slavishly served by a well-paid class of technocrat/ media enablers and enforcers?

Believe what you want, but history is clear: declining social mobility, declining access to political power, declining financial security and the rising concentration of wealth and power in elites are what drives social discord and instability, not the meddling of "outside agitators."

The elite tried the same strategy in the era of social discord created by the wealth-power extremes of The Gilded Age: to distract the nation from the obvious source of instability-- unprecedented concentrations of wealth and power in the hands of the few--the media was filled with stories blaming "outside agitators."

Don't fall for it. The nation's elites are desperate to misdirect us from the financial and power divide that has enriched and empowered them at the expense of the unprotected many. Every story and every broadcast about Russian influence is another brick in a Great Media Wall designed to block our view of the grim reality of American life in a society defined by vast inequality.

Always start an inquiry with this question: cui bono, to whose benefit? Who benefits from us buying the Boris and Natasha Narrative?